Scientists Have Created The Largest Ever Virtual Universe Inside a Supercomputer

As well as studying what we can observe today, scientists rely on simulations to understand more about the past and future of the Universe – and we have a new record for the largest Universe simulation ever computed.

A giant supercomputer has been used to model some 25 billion virtual galaxies, put together from calculations involving around 2 trillion digital particles. And it's holding a brain-popping amount of data.

The simulation, developed by astrophysicists at the University of Zurich in Switzerland, is going to be used to calibrate experiments on board the Euclid satellite due to launch in 2020 and tasked with investigating the mysteries of dark matter and dark energy. 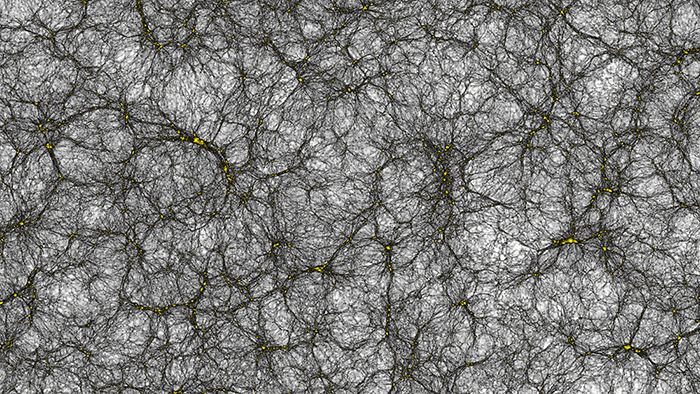 Euclid won't be able to see dark matter directly – it's notoriously elusive – but it will be able to observe dark matter's effects on the rest of the Universe, and the calculations from our virtual model will help the satellite to know what it should be looking for.

"The more accurate these theoretical predictions are, the more efficient the future large scale surveys will be in solving the mysteries of the dark Universe," write the researchers.

To achieve the best possible accuracy for the simulation, scientists spent three years developing a new type of code called PKDGRAV3, specifically designed to run smoothly on the architecture of the latest supercomputers.

By carefully optimising the algorithms used to simulate the Universe, the team was able to cut down on the time needed to imagine some 13.8 billion years of deep space history since the Big Bang.

When tested on the Piz Daint supercomputer at the Swiss National Supercomputing Centre, the code came up with its record-breaking simulation in just 80 hours.

The calculations it runs analyse the way dark matter fluid evolves under its gravity, forming what are known as dark matter halos – small concentrations of matter that astronomers think surround galaxies like our own Milky Way.

As Euclid makes its way through space in the next decade, it will capture the light from billions of galaxies, but what it will really be looking for is slight changes to that light caused by the invisible mass that is dark matter.

It's like looking for distortions of light through an uneven glass pane, say the researchers.

Based on observations of the way the expansion of the Universe is accelerating, scientists think dark matter and dark energy make up around 95 percent of our Universe, with the other 5 percent what we can actually see.

When it gets into orbit, Euclid will be taking a closer look, and the new simulation code from Switzerland will help it make sense of what it's measuring.

Thanks to the advances we're seeing in how far into space we can see and how quickly we can process the data we get back, the net is closing in the hunt for dark matter.

"Euclid will perform a tomographic map of our Universe, tracing back in time more than 10 billion year[s] of evolution in the cosmos," says one of the team, Joachim Stadel.

The research has been published in Computational Astrophysics and Cosmology.