The wire, which fits together at the nano-scale much like molecular LEGO, is made of a string of diamondoids attached to sulphur and copper atoms, and the unique way they link up could lead to fabrics that generate electricity simply through movement.

"What we have shown here is that we can make tiny, conductive wires of the smallest possible size that essentially assemble themselves," says researcher Hao Yan from Stanford University.

"The process is a simple, one-pot synthesis. You dump the ingredients together and you can get results in half an hour. It's almost as if the diamondoids know where they want to go."

You can get an idea of what Yan means in the animation below. The diamondoids, which occur naturally in petroleum fluids, are small cage-like structures made of carbon and hydrogen.

They're strongly attracted to one another, through what are called van der Waals forces, and because of that attraction, each diamonoid links up with the next one in the chain.

Once these cages are bonded to a single copper and sulphur atom each, the attraction between the diamondoids forms an ongoing, wire-like structure.

"Much like LEGO blocks, they only fit together in certain ways that are determined by their size and shape," says researcher Fei Hua Li.

"The copper and sulphur atoms of each building block wound up in the middle, forming the conductive core of the wire, and the bulkier diamondoids wound up on the outside, forming the insulating shell."

It's not the first time researchers have worked on developing nano-wires capable of conducting an electrical current, but the team says its three-atom-wide diamondoid chain is the smallest possible structure.

"Other molecular self-assembly methods have been tried, yet balancing the delicate interplay between attractive and repulsive forces to get just the size you want has proven very difficult," one of the team, Nicholas Melosh told Dexter Johnson at IEEE Spectrum.

"Achieving a 'solid core' of a three-atom cross section is ideal. It's small enough to exhibit unique functionality, yet it can tolerate single defects or strains since there is still a pathway for the electrons to flow." 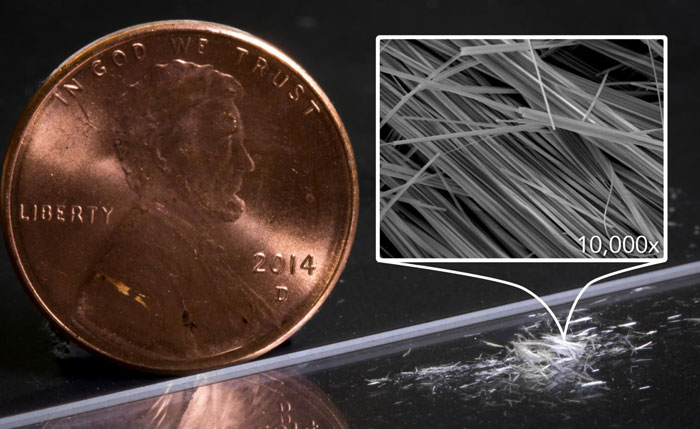 The researchers are now experimenting with substituting new materials in place of copper and sulphur to see what other kinds of nano-wires they can create with the same technique.

So far they're looking at cadmium, zinc, iron, and silver – and are also experimenting with other forms of cages, such as carboranes in place of diamondoids.

Depending on what molecules you use at the wire's core, you'll get a different kind of conductivity, which could one day enable a wide range of applications – such as extremely tiny wires for electrical devices, or superconducting materials that conduct electricity without any loss due to their intricately formed molecular structure.

Another option could be piezoelectric energy devices, which generate electricity from motion. With enough of this nano-wire sewn into your clothing, who knows how much burden we could take off the grid?

"You can imagine weaving those into fabrics to generate energy," Melosh says in a press release.

"This method gives us a versatile toolkit where we can tinker with a number of ingredients and experimental conditions to create new materials with finely tuned electronic properties and interesting physics."

The findings are reported in Nature Materials.