Medical techniques for looking inside our bodies have come a long way, but in the future it looks like doctors may be able to see absolutely everything going on under our skin.

Researchers have invented a new kind of camera that can actually see through structures inside the human body, detecting light sources behind as much as 20 centimetres (7.9 inches) of bodily tissue.

The current prototype, developed by researchers from the University of Edinburgh in the UK, is designed to work in conjunction with endoscopes – long, slender instruments that are often equipped with cameras, sensors and lights to peer inside hollow cavities inside the human body.

Endoscopes are valuable tools for all sorts of medical procedures, but up until now it's been difficult to externally confirm exactly where in the body the instrument is looking, without resorting to things like X-ray scans. 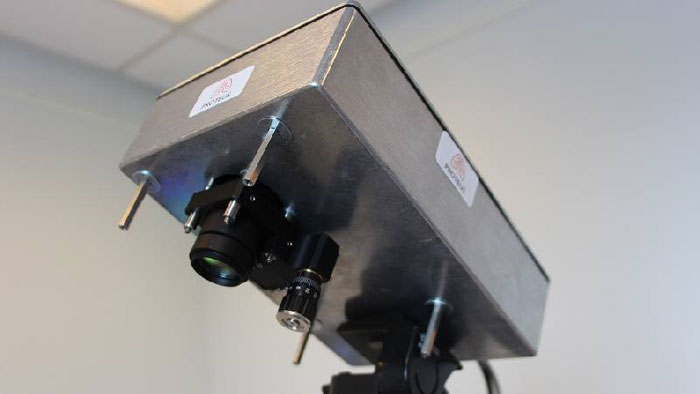 Now that's no longer a problem, due to the new camera's capability to detect sources of light inside the body, such as the illuminated tip of the endoscope's long flexible tube.

Thanks to thousands of integrated photon detectors inside the camera, the device can detect individual particles of light being beamed through human tissue.

When photons come into contact with bodily structures, light usually scatters or bounces off the tissue, but the camera's sensitivity enables it to pick up any tiny traces of light that make it through.

By reconciling light signals that come directly to the camera with scattered photons – which travel longer distances and so take longer to reach it – the device is able to determine where the light-emitting endoscope is placed inside the body.

This technique, which differentiates between scattered and ballistic (direct) photons is called ballistic imaging, and it could help physicians to understand the exact location of the bodily interior they're looking at with the endoscope – which may be hugely valuable in terms of determining treatments.

In the image above, you can see an example of the light the camera detects from an optical endomicroscope in use in sheep lungs.

The image on the left is what the prototype sees, with the ballistic imaging revealing the precise location of the instrument in the lungs.

On the right, the shot reveals what the scene looks like to a conventional camera, with the sensor picking up lots of noise in terms of scattered light, but unable to determine where the photons are originating, as the light particles bounce around the lung structures.

"This is an enabling technology that allows us to see through the human body," says senior researcher Kev Dhaliwal.

"The ability to see a device's location is crucial for many applications in healthcare, as we move forwards with minimally invasive approaches to treating disease."

Dhaliwal is the chief investigator of a collaborative, multi-institutional project called Proteus, which is researching a range of new imaging technologies to help visualise previously unseen biological secrets, with a focus on lung and respiratory diseases.

In this case, the researchers say the improved vision provided by the camera will enable doctors to visualise both the tip and length of the endoscope they're using, and the resolution of the imagery is expected to be refined in the future.

There's no word yet on when we can expect to see this camera used in clinical treatments, but it's a promising development in imaging and diagnostic technologies.

The findings are reported in Biomedical Optics Express.