It's the complete package: a chemical that can trigger the release of dark pigment in any type of skin tone - even in redheads - while also boosting the body's natural defences against skin cancer.

The new compound, which would work in conjunction with sunscreen, offers a temporary boost in melanin production - the pigment that gives human skin, hair, and eyes their colour. If it proves effective in human trials, it could see the end of bad fake tans, and give fair-skinned people better protection when out in the elements.

"It would not actually be a fake tan, it would be the real thing," one of the team, David Fisher from the Massachusetts General Hospital and Harvard University, told The Guardian. "It would just be sunless."

Back in 2006, Fisher and his colleagues discovered that a plant extract called forskolin could produce a cancer-protecting tan in red-haired mice, without being triggered by harmful UV radiation (sunlight).

That was a pretty big deal, because when your red-headed friend complains about going from pale to a straight-up burn when they hit the beach - with no tan in between - they're not just overreacting.

Redheads contain a variant of the MC1R gene, which not only imparts red hair and fair skin, but also messes with a receptor molecule that sits on the surface of skin cells called melanocytes.

In non-redheads, this receptor works with the melanocytes to produce dark melanin pigments on the skin in response to UV radiation, but by some cruel twist of fate, the redhead variant doesn't do this, so the skin tends to burn.

When the researchers applied forskolin to the skin of mice that had been genetically engineered to have fair skin and rust-coloured fur - an analogue for red-haired people - it stimulated the production of melanin.

Here's a comparison, where a high dosage of forskolin gave the red-haired mice temporary black skin: 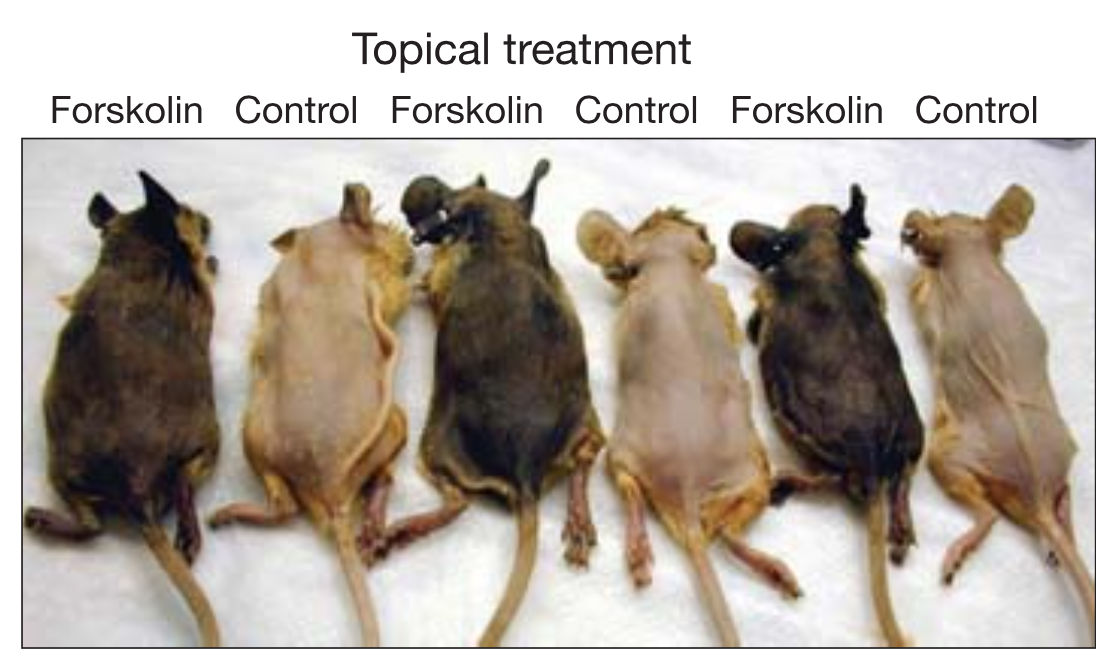 The treated mice were exposed to UV rays, and when compared to untreated red-haired mice, they experienced less sunburn and DNA damage, and were less likely to develop skin cancer tumours.

This is because dark melanin pigment is able to disperse more than 99.9 percent of harmful UV rays absorbed by the skin, so the more you have of it, the better protected your cells are.

But there was one problem. The compound didn't work on humans - our skin is five times thicker than mouse skin, and far better at keeping foreign chemicals out.

Now, a decade later, the researchers have come up with a solution that they think will actually work on us - a different class of compounds that can not only boost the pigmentation process, but also squeeze through the outer layers of our epidermis.

These tiny molecules work by inhibiting SIK (Salt Inducible Kinase) enzymes in the skin, which is like a 'master off switch' for melanin production.

When a strong dose of the compound was tested in red-haired mice, it turned them black within a couple of days, just like the forskolin.

When tested on donated human skin samples, the tanning response could be adjusted based on dosage and frequency of use, and could last for several days without reapplication.

Once application ceased, the colour faded back to normal within about two weeks as new skin replaced the old, tanned cells.

So, when can we have it?

Unfortunately, we'll have to wait some time before we know that this compound can be turned into a marketable product - while the results have been very positive on human skin samples in the lab, we'll need to see them replicated in human trials to ensure that it's safe and effective.

But if it lives up to its promise, this compound would do more than just bankrupt the fake tan industry - when used in conjunction with sunscreen, it could help cut the rate of skin cancer, which is currently the most common cancer in the US, affecting one in five Americans over their lifetime.

"Sunscreen is extremely important; there definitely is protection, but [its] efficacy in melanoma and basal cell carcinoma is surprisingly and frustratingly incomplete," Fisher told The Guardian.

We can't wait to see where this research goes next.

The study has been published in Cell.