Plastic pollution has reached the Antarctic wilderness. It's at Earth's highest peak, and its deepest chasm. And yet, the extent of this insidious plague can still take us by surprise. According to new research, plastic has now turned up camouflaged as ordinary pebbles.

These small chunks of plastic - called pyroplastics - are created when plastic is heated as part of the manufacturing process, or when pieces of plastic are melted by unknown processes in the environment. These are then weathered in much the same way as rocks, shedding microplastic as the faux pebbles are abraded by sand and sea.

Because they look so much like rocks, these pyroplastics may have escaped our notice all over the world - they're similar, the researchers noted, to "plastiglomerates" found in Hawaii, chunks of plastic mixed with sand and shells, melted together by campfires.

But not identical. The pyroplastics were almost pure plastic.

"Pyroplastics are evidently formed from melting or burning of plastic and are distinctly different from manufactured (primary and secondary) marine plastics in terms of origin, appearance and thickness," the researchers write in their paper.

"Since pyroplastics have been retrieved by colleagues from Atlantic beaches in Spain and Pacific beaches of Vancouver, they are not a regional phenomenon, and it is suspected that their distribution may be widespread but that documentation is lacking because of a distinctly geogenic appearance."

As if that's not bad enough, these plastics could even be leaching lead into the environment.

Environmental scientist Andrew Turner of the University of Plymouth and colleagues conducted their research on 165 chunks of plastic from the beaches of Whitsand Bay in Cornwall. They also received an additional 30 chunks from the Orkneys in Scotland, County Kerry in Ireland, and north-western Spain.

The team subjected the samples to tests to find out what they're made of. Attenuated total reflection and infrared spectroscopy revealed that the samples were mostly either polyethylene (commonly used in plastic bags and packaging), polypropylene (hard plastic commonly used for packaging and containers), or a combination of both.

Its use has been curtailed by the Restriction of Hazardous Substances Directive (RoHS), but the amounts found in the samples exceed the RoHS limits - which implies that the plastic predates 2003. 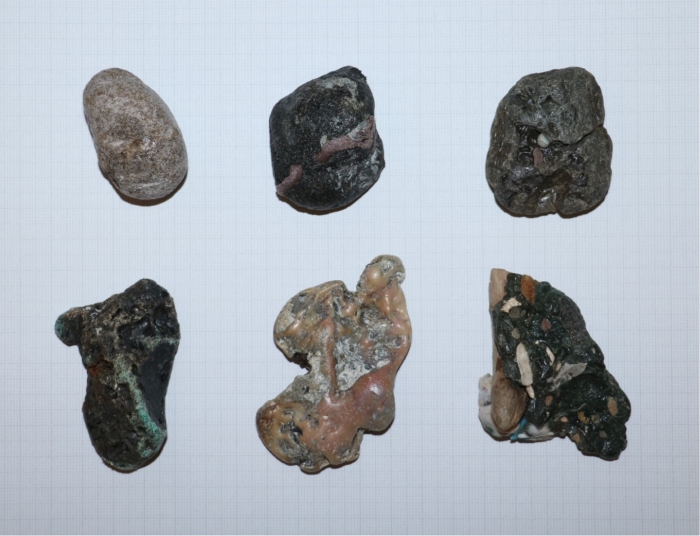 Here is where it gets really concerning. Some of the samples were adhered with the calcium carbonate tubes of the marine worm Spirobranchus triqueter. Lead was found in these tubes.

This suggests, the researchers said, that compounds in the plastic could be at least partially bioavailable - capable of entering living bodies. If the lead in the plastic can be absorbed by the worms, it could also be in the worms' excrement, or passed on to the worms' predators.

More research should be conducted in order to determine how much of this camouflaged plastic is hiding in plain sight, the researchers said. Only then can we accurately gauge how much microplastic and dangerous compounds they're releasing into the environment.

"Pyroplastics require their own classification within the umbrella of marine litter, and are a source of finer plastic particulates through mechanical breakdown and a potential source of contaminants for organisms that inhabit or ingest them," the team writes in their paper.

The research has been published in Science of The Total Environment.