Astronomers have found the largest known solar system, linking together a star and what was thought to be a free-floating 'lonely planet' in orbit some 1 trillion (1 million million) kilometres away from its sun.

"This is the widest planet system found so far and both the members of it have been known for eight years, but nobody had made the link between the objects before," said Niall Deacon of the University of Hertfordshire in the UK. "The planet is not quite as lonely as we first thought, but it's certainly in a very long distance relationship." 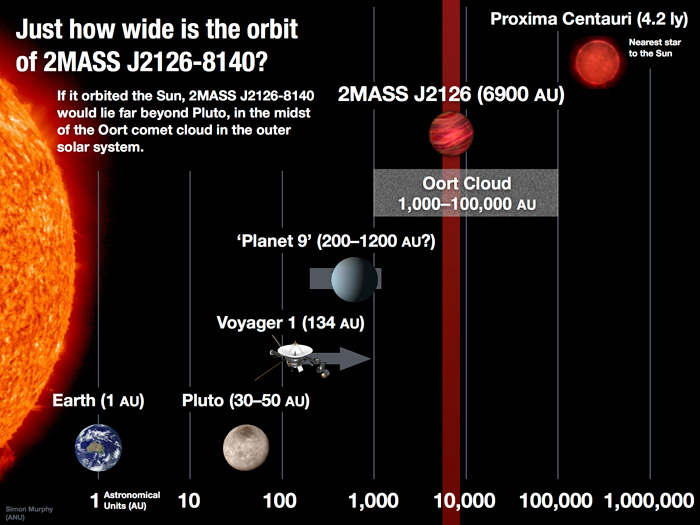 2MASS J2126-8140's orbit compared to objects in and near the solar system. Note that the size of the Sun and planets is not to scale. Credit: Simon Murphy (ANU)

By estimating the star's age using its lithium signature, the researchers say TYC 9486–927–1 is somewhere between 10 million and 45 million years old. This would mean that 2MASS J2126–8140 has completed less than 50 orbits around its star in total.

While it's unlikely that 2MASS J2126–8140 would harbour life, according to the researchers, any inhabitants of the planet probably wouldn't have to worry too much about sunscreen. The distant presence of TYC 9486–927–1 would mean that the planet's sun would resemble just one of the other bright stars in the sky, meaning any lifeforms on the planet might not imagine they were connected to it (and that's if they weren't too busy freezing to death at the time).

"We were very surprised to find such a low-mass object so far from its parent star," said one of the astronomers, Simon Murphy from the Australian National University (ANU). "There is no way it formed in the same way as our solar system did, from a large disc of dust and gas."

The researchers found the pair were linked when they compared the motion of the two through space and realised both the planet and the star were moving together.

"They must not have lived their lives in a very dense environment," said Murphy. "They are so tenuously bound together that any nearby star would have disrupted their orbit completely."

The findings are published in the Monthly Notices of The Royal Astronomical Society.