Scientists Have Figured Out How to Extract Oxygen From Moon Dirt

The Moon is a pretty inhospitable place for humans. It's all dry and dusty, and there's no atmosphere for us to breathe. But there is a bunch of oxygen: The lunar regolith - the crumbly top layer of dirt and rubble on the Moon's surface - is loaded with it. And now scientists have figured out how to get it out.

The process also doesn't produce waste. On the one hand, you get a bunch of oxygen. On the other, a bunch of metal alloys that it was bound up with. Both of these would be really useful on any future lunar bases or colonies.

Thanks to regolith samples returned from previous lunar missions, we know that oxygen is really quite abundant up there. Between 40 and 45 percent by weight of the regolith is oxygen - by far the most abundant component by weight.

"This oxygen is an extremely valuable resource, but it is chemically bound in the material as oxides in the form of minerals or glass, and is therefore unavailable for immediate use," said chemist Beth Lomax from the University of Glasgow in Scotland. 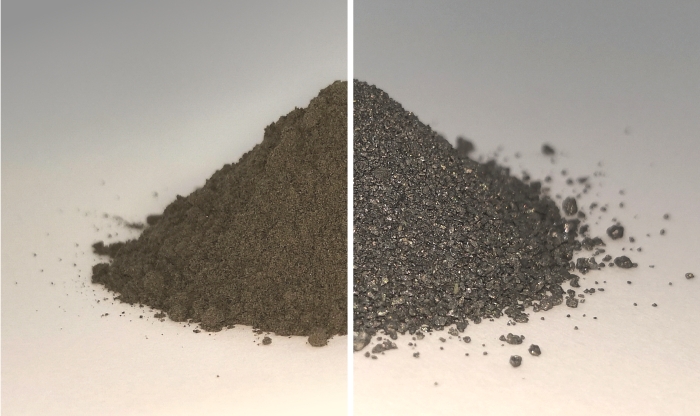 Moon dust before (left) and after (right) the oxygen extraction. (Beth Lomax/University of Glasgow)

Those samples are too valuable to experiment on directly, but having them means we can precisely recreate their consistency using terrestrial materials. This 'fake' lunar dirt is called lunar regolith simulant, and Lomax and her team used it for their research.

There have been previous attempts to extract the oxygen from lunar regolith, such as the chemical reduction of iron oxides using hydrogen to produce water, and then electrolysis to separate the hydrogen from the oxygen in the water; or a similar process with methane instead of hydrogen.

But these techniques have either been low-yield, overly complicated, or too hot, requiring such extreme temperatures that the regolith actually melts.

Lomax and colleagues have skipped the chemical reduction step and gone straight to electrolysis of the powdered regolith.

"The processing was performed using a method called molten salt electrolysis. This is the first example of direct powder-to-powder processing of solid lunar regolith simulant that can extract virtually all the oxygen," Lomax explained.

"Alternative methods of lunar oxygen extraction achieve significantly lower yields, or require the regolith to be melted with extreme temperatures of more than 1,600 degrees Celsius (2,900 F)."

First, the regolith is placed in a mesh-lined basket. Calcium chloride - the electrolyte - is added, and the mix is heated to around 950 degrees Celsius, a temperature that doesn't melt the material. Then, an electrical current is applied. This extracts the oxygen, and migrates the salt to an anode, where it can be easily removed.

It took around 50 hours to extract 96 percent of the oxygen bound up in the regolith sample, but 75 percent of the oxygen lifted in the first 15 hours. Roughly a third of the total oxygen in the sample was detected in off-gas, and the rest was lost, but this is still a vast improvement on the yields of previous techniques.

In addition, the metal left behind is usable - the first time a lunar regolith oxygen extraction technique has produced this result.

"This is the first successful demonstration of solid-state powder-to-powder regolith simulant processing that yields metal alloys as products," the researchers wrote in their paper.

"Furthermore, the clear separation of various alloy phases, and the apparent depletion of other metallic components, introduces the exciting potential for metal/alloy separation and refining from unbeneficiated lunar regolith."

There were three main alloy groups in the by-product, sometimes with small amounts of other metals mixed in: iron-aluminium, iron-silicon, and calcium-silicon-aluminium.

This discovery means the technique could still be valuable even if it turns out that oxygen can be extracted from suspected water ice reserves on the Moon.

"This process would give lunar settlers access to oxygen for fuel and life support, as well as a wide range of metal alloys for in-situ manufacturing," said ESA lunar strategy officer James Carpenter.

The research has been published in Planetary and Space Science.