(Vladimir Pushkarev/Russian Centre of Arctic Exploration via The Siberian Times)

Researchers have finally made it to the bottom of one of the three mysterious holes that were spotted up in Siberia in July - and they've brought back data that will hopefully help identify where they came from.

The holes, which appeared seemingly out of nowhere on Russia's Yamal Peninsula, were first spotted in July after an aircraft pilot photographed them from above (one of the many viral pictures he released is below).

Naturally, the internet went crazy with conspiracy theories about underground explosions, meteorites and, of course, aliens.

Now scientists from the Russian Centre of Arctic Exploration has worked their way down into the bottom of the largest hole, as Peter Farquhar reports for Business Insider Australia.

The hole stretched about 16 metres down to its floor - but at the bottom there's a frozen lake that's at least another 10.5 metres deep.

It's taken this long for a team to get down there as they had to wait for that lake to freeze over - in the summer it's a mud bath with water pouring into it from the ground above. But in the -11 degrees Celsius weather, they were able to get right to the bottom safely and investigate what had caused the phenomenon.

The researchers are looking into the theory that the holes were caused by underground gas explosions.

One unusual observation is that the largest hole is located on the intersection of two tectonic faults - although the region is generally stable in a seismological sense, the scientists found that the temperature beneath the hole was "higher than normal," as Farquhar explains for Business Insider Australia.

But it'll be a while before we know for sure what caused the chasms to suddenly appear in the landscape.

"We took all the probes we planned, and made measurements," Vladimir Pushkarev, director of the Russian Centre for Arctic Exploration, told The Siberian Times.

"Now scientists need time to process all the data and only then can they draw conclusions."

Another theory is that the holes aren't new at all - but no one had ever noticed them until now.

The researcher will also be studying images from satellites all the way back to the 1980s to find out if any similar objects have ever been recorded in the remote region.

In the meantime, check out these beautiful images taken by the researchers during the climb (and browse the full story and gallery over at The Siberian Times, which originally covered the story): 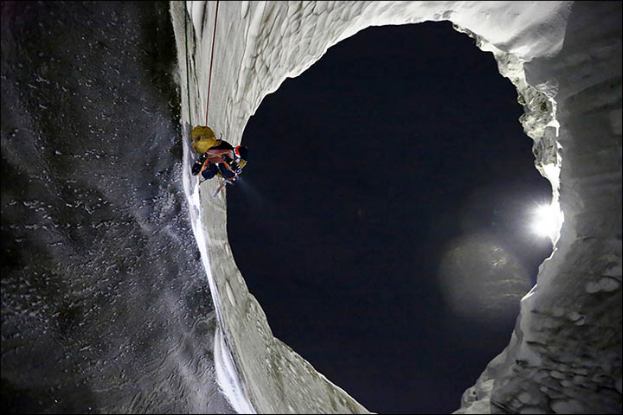 And see the one of the original hole images that broke the internet: