If you were to compare yourself to a neutron star, you probably wouldn’t find very many things in common. After all, neutron stars – celestial bodies with super strong magnetic fields – are made from collapsed star cores, lie light-years away from Earth, and don’t even watch Netflix.

But, according to new research, we share at least one similarity: the geometry of the matter that makes us.

Researchers have found that the 'crust' (or outer layers) of a neutron star has the same shape as our cellular membranes. This could mean that, despite being fundamentally different, both humans and neutron stars are constrained by the same geometry.

"Seeing very similar shapes in such strikingly different systems suggests that the energy of a system may depend on its shape in a simple and universal way," said one of the researchers, astrophysicist Charles Horowitz, from Indiana University, Bloomington.

To understand this finding, we need to quickly dive into the weird world of nuclear matter, which researchers call 'nuclear pasta' because it looks a lot like spaghetti and lasagne. See for yourself: 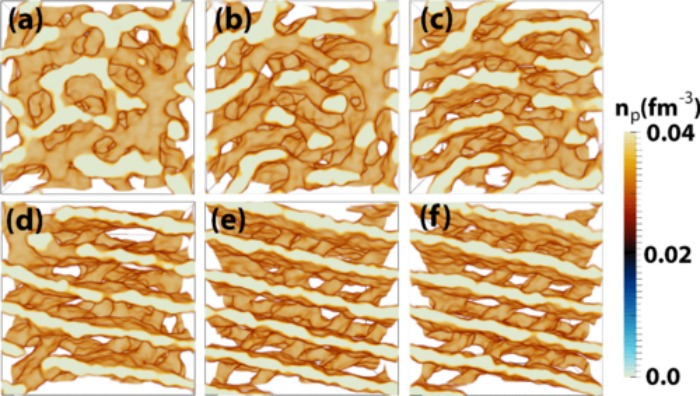 This nuclear pasta forms in the dense crust of a neutron star thanks to long-range repulsive forces competing with something called the strong force, which is the force that binds quarks together.

In other words, two powerful forces are working against one another, forcing the matter – which consists of various particles – to structure itself in a scaffold-like (pasta) way.

As one of the team, Greg Huber, a biological physicist from the University of California, Santa Barbara, explains:

"When you have a dense collection of protons and neutrons like you do on the surface of a neutron star, the strong nuclear force and the electromagnetic forces conspire to give you phases of matter you wouldn't be able to predict if you had just looked at those forces operating on small collections of neutrons and protons."

Now, it turns out that these pasta-like structures look a lot like the structures inside biological cells, even though they are vastly different.

This odd similarity was first discovered in 2014, when Huber was studying the unique shapes on our endoplasmic reticulum (ER) – the little organelle in our cells that makes proteins and lipids.

At first, Huber thought that these structures on the ER – which he called "parking garages", or more formally, Terasaki ramps – were something that only happened inside soft matter.

"I called Chuck [Horowitz] and asked if he was aware that we had seen these structures in cells and had come up with a model for them," Huber said. "It was news to him, so I realised then that there could be some fruitful interaction."

You can see the ER structures (left) compared to the neutron stars (right) below:

The discovery brought both of the scientists together to compare and contrast the differences between the structures, such as the conditions required for them to form.

Normally, matter is characterised by a phase – sometimes called its state – such as gas, solid, liquid Different phases are usually influenced by a plethora of various conditions, like how hot the matter is, how much pressure it’s under, and how dense it is.

These factors change wildly between soft matter (the stuff inside cells) and neutron stars (nuclear matter). After all, neutron stars form after supernovae explosions, and cells form within living things. With that in mind, it’s quite easy to see that the two things are very different.

"For neutron stars, the strong nuclear force and the electromagnetic force create what is fundamentally a quantum mechanical problem," Huber said.

"In the interior of cells, the forces that hold together membranes are fundamentally entropic and have to do with the minimisation of the overall free energy of the system. At first glance, these couldn't be more different."

While the similarity is cool, and makes us feel connected to the cosmos in a strange way, the differences signify the importance of the discovery, because they hint that two very different things – cells and neutron stars – might be guided by the same geometric rules that we're only just beginning to understand.

It will take further research to really figure out what's going on here, but it’s a starting point that could help us understand something fundamental about how matter is structured, and we're excited to see where that leads.

The team’s work was published in Physical Review C.