Researchers have developed a technique that allows them to rapidly thaw cryopreserved human and pig samples without damaging the tissue - a development that could help get rid of organ transplant waiting lists.

Cryopreservation is the ability to preserve tissues at liquid nitrogen temperatures for long periods of time and bring them back without damage, and it's something scientists have been dreaming about achieving with large tissue samples and organs for decades.

Not only for the life-extending applications we've read about in sci-fi novels, but, more feasibly, because the technology could allow hospitals to safely store organs for long periods of time.

Right now, 22 people die in the US each day on average while waiting for an organ transplant. One of the biggest challenges isn't organ shortages - it's that organs can't stay 'on ice' longer than a few hours without being irrevocably damaged.

That means even when there are enough organs being donated, there's still the huge logistical problem in finding a matching recipient and getting the organs to them fast enough.

Already it's estimated that more than 60 percent of the heart and lungs donated for transplantation each year are thrown out, because they can't be kept on ice more than four hours, and can't make it to a patient who needs them in that time.

"If only half of these discarded organs were transplanted, then it has been estimated that wait lists for these organs could be extinguished within two to three years," the researchers, led by John Bischof from the University of Minnesota, write in Science Translational Medicine.

A better solution could be cryopreservation - keeping tissue stored at temperatures around -80 to -190 degrees Celsius (-112 to -310 degrees Fahrenheit).

One of the leading cryopreservation techniques is vitrification - which involves super-cooling biological samples to a glassy state at around -160 degrees Celsius (-256 degrees Fahrenheit). In fact, vitrification is already being used on human brains by cryonics companies such as Alcor.

Through vitrification, organs could be stored for years and potentially even longer, which would mean doctors could build up a bank of available organs and make it a lot easier for anyone who needs a heart or lung to find one straight away.

In the past, researchers have successfully shown that thawing can work in small tissue samples up to around 1 mL in volume. But as tissue gets larger, and approaches the size of entire human organs, the current leading technique of convection - slow warming over ice - doesn't work.

That could be about to change, with the Minnesota team announcing the development of a new technique that's allowed them to rapidly rewarm cryogenically treated human and pig samples without damaging delicate frozen tissues.

"This is the first time that anyone has been able to scale up to a larger biological system and demonstrate successful, fast, and uniform warming of hundreds of degrees Celsius per minute of preserved tissue without damaging the tissue," said Bischof.

Instead of using convection, the team used nanoparticles to heat tissues at the same rate all at once, which means ice crystals can't form, so they don't get damaged. 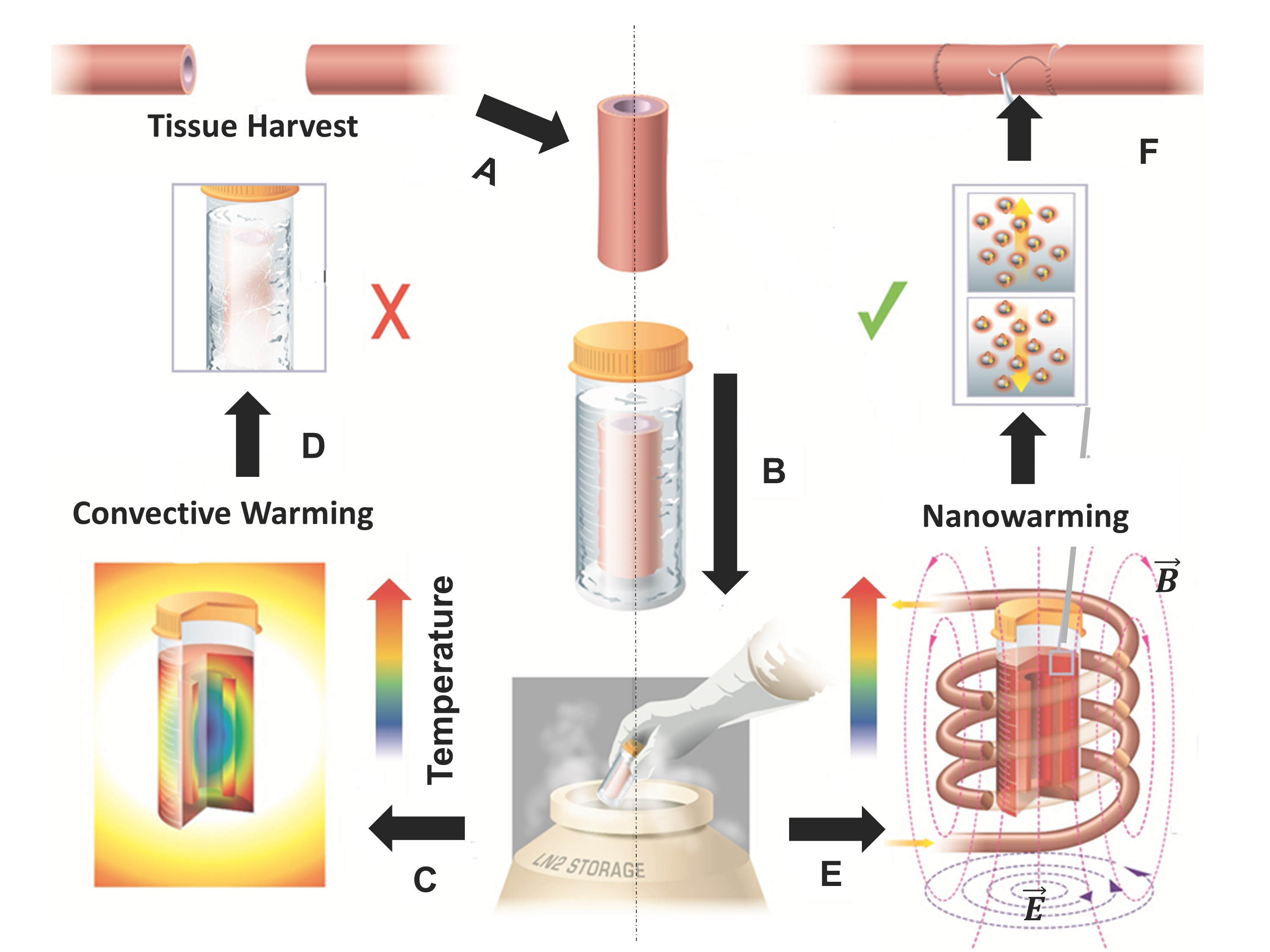 To do this, the researchers mixed silica-coated iron oxide nanoparticles into a solution and generated uniform heat by applying an external magnetic field.

They then warmed up several human and pig tissue samples ranging between 1 and 50 mL, using either their new nanowarming technique and traditional slow warming over ice.

Each time, the tissues warmed up with nanoparticles displayed no signs of harm, unlike the control samples.

You can see the comparison below, with the nanowarming group on the left of the red line, and the control groups on the right:

Afterwards, they were able to successfully wash the nanoparticles away from the sample after thawing.

The team also tested out the heating in an 80 mL system - without tissue this time - and showed that it achieved the same critical warming rates as in the smaller sample sizes, suggesting that the technique is scalable.

"In the future, we believe that nanowarming can be applied to larger tissues and organs up to volumes of 1 litre and possibly beyond."

You can see a video of tissue being thawed out in less than a minute below:

The team admits that larger tissue - and even whole organs - will need to have the nanoparticles injected into them, rather than just sitting around them, to achieve the same uniform heating, but it's something they want to try next.

It's important to note that the team hasn't successfully shown that their technique actually works on organs, which are made up of complex arrangements of multiple tissue types.

That's something that will require a lot of optimisation and tweaking, so we're a long way off being able to bring organs back from cryopreservation. But it's the first time we've seen such large volumes of tissue successfully be thawed from a cryopreserved state, and that's pretty exciting.