Scientists Have Identified That Mysterious, Metallic Sound Coming From The Mariana Trench

After months of speculation, scientists have finally identified the most likely source of a creepy audio recording from the deepest part of the ocean.

According to a new study, the eerie 3.5-second recording that was picked up by an autonomous vehicle deep in the Mariana Trench is a new type of baleen whale call that no one has ever heard before, and it’s still not clear what it actually means.

"It’s very distinct, with all these crazy parts," says one of the team, Sharon Nieukirk from Oregon State University.

"The low-frequency moaning part is typical of baleen whales, and it’s that kind of twangy sound that makes it really unique. We don’t find many new baleen whale calls."

You can hear the recording below, which features five different sounds ranging from metallic to biological, and has been nicknamed the Western Pacific Biotwang:

It spans frequencies as low as 38 hertz and as high as 8,000 hertz - humans can hear between 20 and 20,000 Hz - and Nieukirk and her team have been unable to find any human or geological origin.

"The sounds reported here are not similar to known anthropogenic sources such as noise produced by ships or seismic airguns," the team reports. 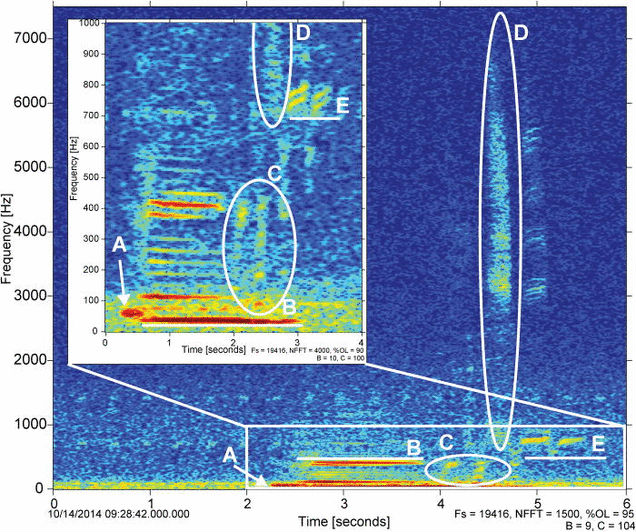 The same sound was recorded on multiple occasions from autumn 2014 to spring 2015 in the Marianas Trench Marine National Monument - a 246,000 km2 (94,981 mile2) part of the Mariana Trench east of Guam, and one of the largest marine protected areas in the world.

While these sounds are entirely unique in the scientific record, the best clue Nieukirk's team had for identifying them was an equally bizarre recoding from 2001, made in Australia’s Great Barrier Reef:

Known as the minke whale 'Star Wars' call, it sounds just as alien as this more recent recording, and the researchers say that based on similarities of frequency and structure, the Western Pacific Biotwang likely comes from the same type of animal.

"The complex structure of the Western Pacific Biotwang sound, the frequency sweep, and the metallic nature of the final part of this call are all very similar to characteristics of dwarf minke whale Star Wars calls," the team concludes.

Dwarf minke whales are a subspecies of common minke whale (Balaenoptera acutorostrata), which belongs to the larger class of baleen whales that are characterised by the baleen mouth plates they use to filter krill and small fish from the seawater.

They're also known to make "boings" - a different type of sound to the Star Wars call, but equally as weird, so it looks like their repertoire of vocalisations is even more complex than we thought.

But the mystery is not over yet, because while baleen whale calls are often related to mating, which means they're mainly heard during the winter, the Western Pacific Biotwang was recorded throughout the year.

"If it’s a mating call, why are we getting it year round? That’s a mystery," says Nieukirk. "We need to determine how often the call occurs in summer versus winter, and how widely this call is really distributed."

The team hopes to launch another expedition to the Marianas Trench Marine National Monument in the future, to find the animals responsible for making the Western Pacific Biotwang sound, and figure out how and why they're doing it.

"It really is an amazing, weird sound, and good science will explain it," says Nieukirk.

The research has been published in The Journal of the Acoustical Society of America.