Researchers Have Worked Out How to Mind Control Cockroaches

Engineering students in China have worked out how to control live cockroaches using a brain-to-brain interface technique, essentially creating tiny biological robots that perform the will of their human masters.

Using the interface, the researchers have managed to guide a living cockroach along S-shaped and Z-shaped paths using their minds.

Presenting their research in video form at the IEEE Robotics and Automation Society's annual conference, the team of students from Shanghai Jiao Tong University describe how they fitted one of their team members with a bluetooth electroencephalogram (EEG) headset. The researcher then thought about guiding himself through the S- or Z-shaped pathway, and these brain waves were then translated into electrical impulses which were wirelessly sent to an electronic backpack receiver attached to the cockroach.

The electrical impulses then stimulated the antennae nerves of the cockroach through a microelectrode implanted into the animal's head. Through this nerve, the electrical impulses controlled its behaviour and created what the students call a "machine animal". They've illustrated this process below: 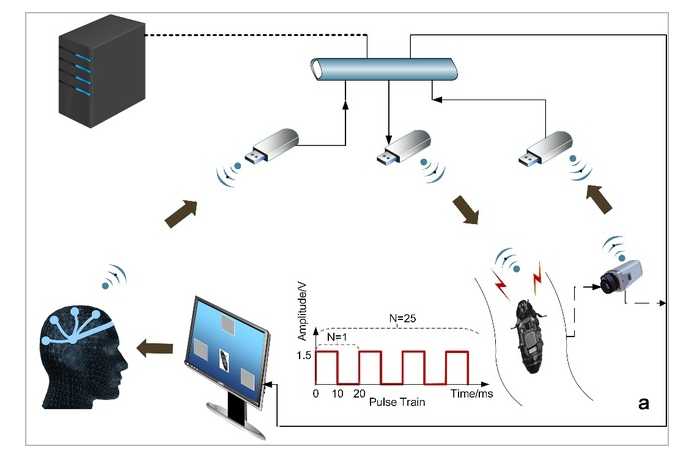 A team at the University of Texas created similar mind-controlled cockroaches a few months ago, with the aim of using cockroaches to explore disaster zones.

The students from Shanghai believe their cockroaches could also be used to help map out complex terrains, and also highlights how close we're getting to a world like the one James Cameron dreamed up in Avatar, where we can control other animals - albeit it simple ones - with our minds.

In a press release the students explain that their research "extended the traditional brain-computer interface technology and tentatively attempted the avatar brain-brain communication". The video on their research, which you can see below, won second prize in the conference's student video competition.

The team is are now planning to upgrade the control mode so that several cockroaches can be controlled by seven different humans at the same time. And we don't know whether to be impressed or terrified. We can't help but imagine what would happen if a mind-controlled cockroach army got into the wrong hands...