Researchers have developed a new peptide therapy that reverses some of the symptoms of ageing in mice, including hair loss and reduced stamina.

The treatment specifically targets senescent cells - damaged cells that build up as we get older and lead to inflammation and health problems. If similar results can be replicated in human trials, these peptides could form the basis of new treatments for age-related disease.

Senescent cells have lost the capacity to divide, but refuse to die off completely, and as a result, when they accumulate they increase the risk of disease.

Based on tests involving mice, researchers from the Erasmus University Medical Centre in the Netherlands found that the peptide eliminates senescent cells by inducing the natural cell-death process of apoptosis, while leaving healthy cells alone.

On a biological level, the peptide works by blocking the signals between two proteins called FOXO4 and p53, which when they interact are thought to be crucial in the process of cell senescence.

When that communication channel is shut down, the cells self-destruct.

After the peptide was administered, the effects in the mice were dramatic: missing fur reappeared, kidney function improved, and the treated animals were able to run twice as far as the untreated control group.

After a year of testing, no obvious side effects were observed.

"FOXO4 is barely expressed in non-senescent cells, so that makes the peptide interesting as the FOXO4-p53 interaction is especially relevant to senescent cells, but not normal cells," says one of the researchers, Peter de Keizer.

The study was originally focussed on kidney function, but the team noticed hair regrowth and improved stamina too.

You can see the effects on hair loss below - the mouse on the left has been treated with the peptide, and the one on the right hasn't: 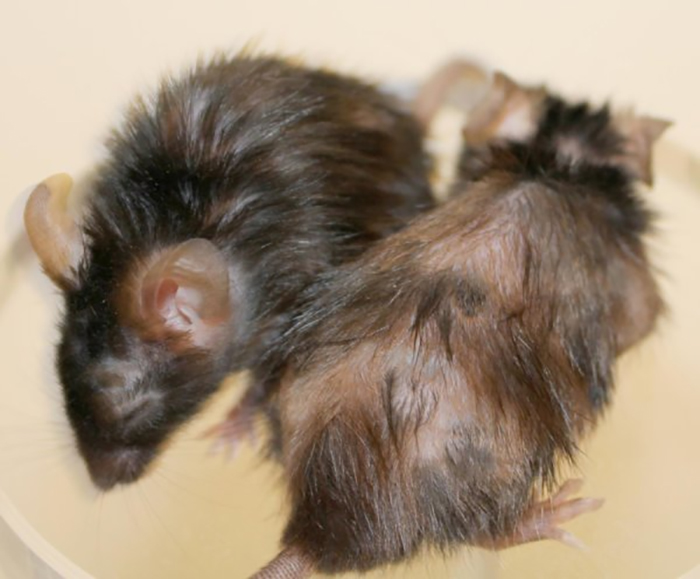 What makes this study particularly intriguing is the way the peptide seems to reverse the symptoms of ageing that have already occurred, demonstrating how lost fur in mice can be regrown.

The big question now is if similar improvements could be seen in humans.

While there's no guarantee that they will - many mouse studies don't end up translating to humans - the researchers think it's worth investigating, and are in the process of planning clinical trials.

The team wants to try the peptide on people with glioblastoma multiforme brain tumours, because the cancerous cells have similar biomarkers to senescent cells, and the same protein-blocking technique could prove effective.

Scientists have been working for years on ways to target senescent cells because of the way they contribute to poor health as we age, but no effective treatment has yet been developed for humans.

One concern is that there are still questions about what would happen if senescent cells kept getting killed off with nothing to replace them.

Safely removing senescent cells is one of three approaches scientists are looking at in this area, alongside preventing cell damage in the first place, and stimulating stem cells to improve tissue regeneration once the senescent cells are cleared out.

If scientists can figure a way to cure the rigours of age, it's likely the solution will come through a combination of these strategies.

"This wave of research on how we can fight ageing is complementary, and not in competition," says de Keizer.