For the first time, scientists have revealed the chemical structure of one of the key markers of Alzheimer's disease, capturing high-resolution images of the abnormal tau protein deposits suspected to be behind Alzheimer's and other neurodegenerative conditions.

The results will now give scientists an unprecedented glimpse at how these harmful deposits function at a molecular level, and could lead to a number of new treatments to prevent them from forming – and in doing so, help to combat Alzheimer's and dementia.

"This is a tremendous step forward," says one of the team, Bernardino Ghetti from Indiana University.

"It's clear that tau is extremely important to the progression of Alzheimer's disease and certain forms of dementia. In terms of designing therapeutic agents, the possibilities are now enormous."

In the new study, researchers led by the MRC Laboratory of Molecular Biology (LMB) in the UK extracted tau protein filaments from the brain of a deceased patient with a confirmed diagnosis of Alzheimer's disease, and imaged them using a technique called called cryo-electron microscopy (cryo-EM). 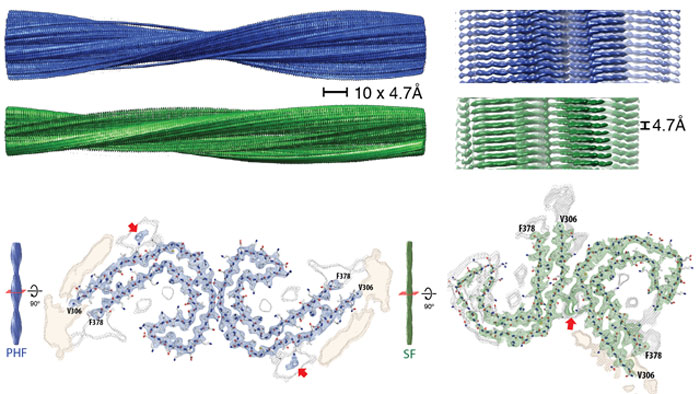 Alzheimer's disease is linked to the build-up of two kinds of abnormal protein deposits – tau filaments, which form inside nerve cells, and amyloid beta proteins, which builds up outside cells.

In healthy brains, tau acts as a stabiliser, but when the proteins become defective, they can form into bundles of tangled filaments, which are thought to impede communication between brain cells, leading to the neurodegeneration and reduced cognitive ability seen in conditions like Alzheimer's disease.

Researchers have studied the tau protein's involvement in Alzheimer's for decades, but up until now, we've never been able to see tau filaments up so close – and the molecular insights afforded by the cryo-EM imaging performed here could mean the opportunities for drug discovery targeting tau is a whole new ball game.

"Drugs that could clear away clumps of protein in the brain are a key goal for researchers, but to directly affect these proteins, molecules that make up a drug need to latch on and bind to their surface," explains the head of research at Alzheimer's Research UK, Rosa Sancho.

"Knowing the precise shape of these complex protein structures is enormously valuable in guiding the development of targeted drugs."

While there's no shortage of research examining how abnormal tau and amyloid beta proteins function, it's been unclear just how much artificial samples assembled in the lab differ from the structures that form in the lab.

Thanks to the tau structures obtained from the deceased patient, researchers now have the ability to investigate how abnormal filaments function at an atomic level in the human brain – and studying these tangles won't only benefit Alzheimer's research, the team says.

"This is a big step forward as far as tau goes but it is bigger than that," neuroscientist Michel Goedert from LMB told James Gallagher at BBC News.

"This is the first time anybody has determined the high-resolution structure [from human brain samples] for any of these diseases. The next step is to use this information to study the mechanisms of neurodegeneration."

We won't know the full ramifications of this discovery until scientists have a chance to follow up on the new findings presented here, but it's clear that this could be a major turning point in studying how to counter these harmful protein clumps, with Ghetti describing the result as one of the major discoveries of the last quarter century of Alzheimer's research.

That said, it may take many more years (or even decades) for new treatments to ultimately come out of this – but at least we're now a big step closer to that long-hoped-for eventuality, which before now may have been impossible.

"It's like shooting in the dark – you can still hit something but you are much more likely to hit if you know what the structure is," explains one of the team, LMB's Sjors Scheres.

"We are excited – it opens up a whole new era in this field, it really does."