A Huge, Mysterious Reservoir of Methane Has Been Identified Deep Under The Ocean

Scientists have discovered evidence of a massive distributed reservoir of methane formed by chemical reactions deep inside the ocean floor.

Abiotic methane – created in reactions that don't involve organic matter or living creatures – has long been known to exist buried in the seabed and released via deep-sea vents, but the origins of the gas in this underwater environment weren't fully understood.

"Identifying an abiotic source of deep-sea methane has been a problem that we've been wrestling with for many years," says marine geochemist Jeffrey Seewald from the Woods Hole Oceanographic Institution (WHOI).

"Here's a source of chemical energy that's being created by geology."

In a new study, Seewald and fellow WHOI researchers analysed rock samples from Earth's upper mantle and lower oceanic crust collected from across the ocean: 160 rock pieces in total, sourced from numerous ocean ridges, along with subduction zones – such as the Mariana forearc – and uplifted sections of oceanic crust called ophiolites.

In almost all the deep-sea locations sampled, spectroscopy and microscopy techniques revealed the rocks contained pockets of methane, often along with hydrogen. As for how the methane is produced, the researchers say it happens as seawater, moving slowly through deep oceanic crust, gets trapped inside hot, rock-forming mineral called olivine - the primary component of Earth's upper mantle.

Over time, the mineral starts to cool. When it does, the water stored inside the 'fluid inclusions' inside the rock goes through a chemical reaction called serpentinisation, which ends up yielding both methane and hydrogen.

Once formed, the researchers explain the methane and hydrogen can remain sealed inside the rock "over geological timescales until extracted by dissolution or fracturing of the olivine host".

That's important, and not just for methane on Earth.

We know that methane exists elsewhere in the Solar System – such as on Mars, and plenty of other distant worlds too – and the new findings help to explain how it might persist there, even in the absence of liquid water or hydrothermal activity.

"Because fluid inclusions may form in olivine-rich rocks that interact with water on celestial bodies elsewhere in our Solar System, their formation may have key implications for the maintenance of microbial life beyond Earth," the authors write in their paper, noting that the eventual venting or escape of these fuel sources from the rocks could potentially sustain life-forms with nothing else to feed upon.

"Present-day release of trapped volatiles by these mechanisms may provide sufficient H2 [hydrogen] and CH4 [methane] to supply microbial ecosystems with electron donors in natural environments where H2 or CH4 formation would otherwise not be favourable." 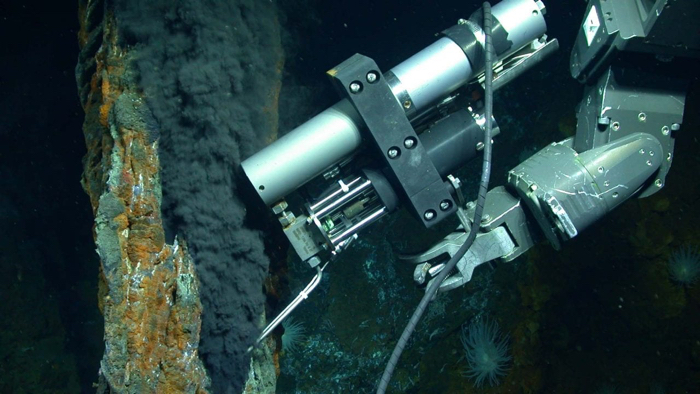 Back on Earth, it's possible this chemical production-and-release cycle may itself have been an important factor in the survival of terrestrial, ocean-dwelling organisms since time immemorial.

Indeed, the researchers say the process has "likely been occurring since the onset of plate tectonics," and "may have supported microbial ecosystems within diverse geologic environments".

That said, the team acknowledges their explanation for how this massive methane distribution came to be is somewhat speculative. The origin of the trapped fluids cannot be unequivocally determined, they write, but note that their detection of other chemicals inside the rocks is "consistent with a seawater-like source fluid".

Even if they're not 100 percent right about this mysterious methane's origin story, the other major takeaway is just how gargantuan the reservoir they've discovered might end up being.

While quantifying the extent of buried oceanic methane may not have been the study's primary goal, based on the strike rate in the rock samples analysed, the team estimates the oceanic deposits in total would exceed the amount of methane in Earth's atmosphere before the industrial age.

"Extrapolation of our results globally suggests that inclusions may represent one of the largest sources of abiotic CH4 on Earth," the researchers conclude.