For the first time ever, scientists have captured images of the flash of light that sparks at the very moment a human sperm cell makes contact with an egg.

The phenomenon has been observed in animals before, but no one's ever seen the spark of human conception. And what's even more incredible is the fact that some eggs burn brighter than others, which is a direct indication of their ability to develop into a healthy embryo, a team from Northwestern University found.

So why do sparks literally fly at the moment of conception? Back in 2011, the Northwestern team discovered that sparks of zinc exploded at the point of conception in mice.

It took them a few years to figure out how to image this event, but by 2014, they'd managed to film the event for the first time ever, and watched as billions of zinc atoms were released at the exact moment when a mammal's egg is pierced by a sperm cell.

Using a new fluorescent sensor that's able to track the movements of zinc in live cells, the team caught a glimpse of an egg's zinc-storage capabilities, and found some 8,000 zinc compartments, each one containing around 1 million zinc atoms, just ripe for exploding. The tiny 'fireworks' that result were found to last for about 2 hours after fertilisation.

Now, the same team has managed to film this event occurring in a human egg at the point of conception.

"It was remarkable," says one of the team, Teresa Woodruff. "We discovered the zinc spark just five years ago in the mouse, and to see the zinc radiate out in a burst from each human egg was breathtaking."

If you follow health science news closely, you'll know that the vast majority of studies - even the most promising ones - fail to live up to their potential. Maybe positive results in mice didn't translate in humans, or perhaps lab-based studies couldn't be replicated in living organisms. Maybe the researchers simply ran out of funding.

But in this case, we can actually see how quickly the team has progressed from mice to humans, and in the space of just five years, have figured out something that could change a lot of lives  - the flashes of light that have now been seen in humans for the first time can be used to determine the viability of an individual egg.

For couples relying on IVF treatments, that's huge, because around 50 percent of fertilised eggs do not develop properly due to some kind of unavoidable genetic mix-up. 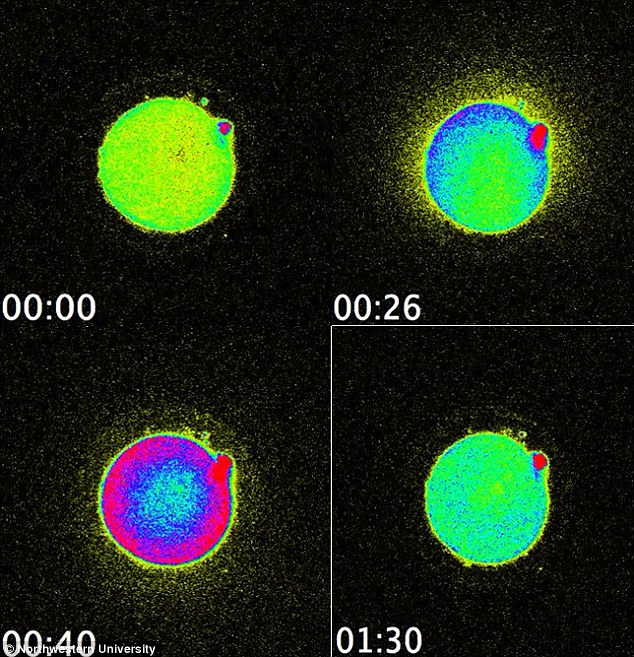 "This is an important discovery because it may give us a non-invasive and easily visible way to assess the health of an egg and eventually an embryo before implantation," says one of the researchers, Eve Feinberg.

"There are no tools currently available that tell us if it's a good quality egg," she adds. "Often we don't know whether the egg or embryo is truly viable until we see if a pregnancy ensues. That's the reason this is so transformative. If we have the ability up front to see what is a good egg and what's not, it will help us know which embryo to transfer, avoid a lot of heartache, and achieve pregnancy much more quickly."

For the experiment, the team used a sperm enzyme to activate the egg (fertilising the egg with actual sperm for research purposes is illegal under US federal law) and watched as the event triggered calcium levels to rise inside the egg, which prompted the release of zinc.

"As the zinc shoots out, it binds to small molecules which emit a fluorescence which can be picked up by camera microscopes," Sarah Knapton explains for The Telegraph.

So why is zinc so special? The researchers found that eggs compartmentalise and distribute zinc to control the development of a healthy embryo - the mineral plays a vital role in controlling the 'decision' the egg makes to grow into an embryo - so the more zinc that's released, the brighter the flash, and the more viable the egg.

"The egg first has to stockpile zinc and then must release some of the zinc to successfully navigate maturation, fertilisation, and the start of embryogenesis," said one of the team, Thomas O'Halloran, back in 2014. "But exactly how much zinc is involved in this remarkable process and where is it in the cell?"

This is hopefully a question the researchers are now equipped to answer, and we can't wait to see what they discover next.

The results have been published in Scientific Reports, and you can watch the footage below: