Scientists Have Found The Largest Exposed Fault on Earth

For the first time, researchers have confirmed the existence of the largest exposed fault on Earth, and it could explain how a 7.2-km-deep (4.5-mile) abyss formed in the Pacific Ocean.

Discovered beneath the Banda Sea in eastern Indonesia, the massive fault plane runs right through the notorious Ring of Fire - an explosive region where roughly 90 percent of the world's earthquakes and 75 percent of all active volcanoes occur.

For almost a century, scientists have known about the Weber Deep - a massive chasm lurking near the Maluku Islands of Indonesia that forms the deepest point of Earth’s oceans not within a trench.

But until now, no one could figure out how it formed.

To investigate, geologists from the Australian National University (ANU) in Canberra and Royal Holloway University of London analysed maps of the sea floor taken from the Banda Sea region in the Pacific Ocean.

They discovered that rocks sitting the bottom of the sea were cut by hundreds of straight parallel scars.

Simulations of the sea floor suggested that a massive piece of crust bigger than Belgium was at some point ripped apart by a massive crack - or fault - in the oceanic plates to form a deep depression in the ocean floor.

The activity appeared to have left behind the biggest exposed fault plane ever detected on Earth, which the researchers have tentatively called the Banda Detachment.

The team's simulations showed that the Banda Detachment fault plane was exposed over an area of 60,000 square kilometres (23,166 square miles) when the sea floor cracked.

"We had made a good argument for the existence of this fault we named the Banda Detachment, based on the bathymetry [underwater topography] data and on knowledge of the regional geology," said one of the researchers, Gordon Lister from ANU. 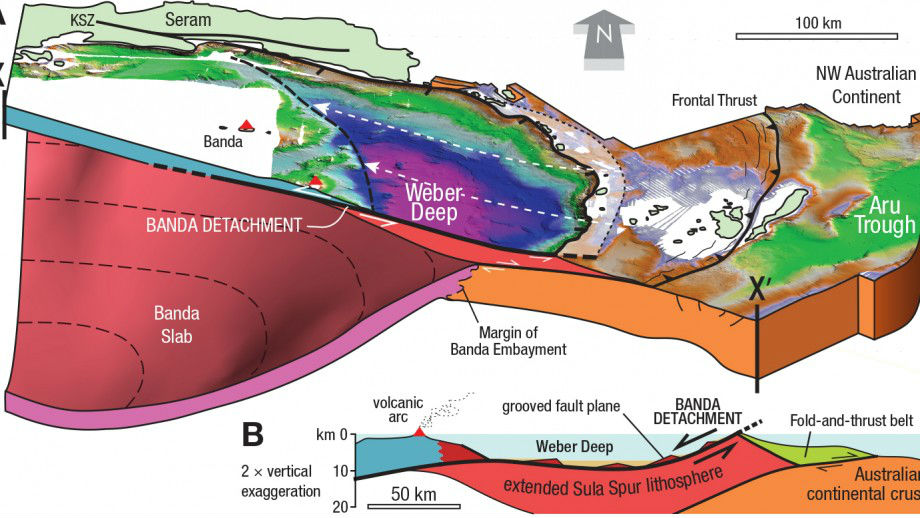 But as far as the researchers were concerned, this massive fault didn't exist until they saw evidence of it with their own eyes.

When they sailed out in the Pacific Ocean in eastern Indonesia, they identified prominent landforms in the water that were formed by the Banda Detachment fault plane.

"I was stunned to see the hypothesised fault plane, this time not on a computer screen, but poking above the waves," says one of the team, Jonathan Pownall from ANU. "The discovery will help explain how one of Earth's deepest sea areas became so deep."

The team says the fact that the Weber Deep abyss formed right where the Banda Detachment was exposed could help researchers figure out how it formed.

"Our research found that a 7 km-deep abyss beneath the Banda Sea off eastern Indonesia was formed by extension along what might be Earth's largest-identified exposed fault plane," says Pownall.

The discovery could also help geologists predict the movements of one of the most tectonically active regions in the world - the Pacific Ring of Fire, a 40,000-km (25,000-mile) stretch of ocean dotted with no less than 452 volcanoes, which is around 75 percent of the world's total.

"In a region of extreme tsunami risk, knowledge of major faults such as the Banda Detachment, which could make big earthquakes when they slip, is fundamental to being able to properly assess tectonic hazards," says Pownall.