Scientists Have Released Footage of a Giant, 3-Km Crack That Opened Up in Arizona

A massive, 3.2-km (2-mile) crack has formed in the Arizona Desert, and scientists have released the first up-close footage of the damage.

The crack is expected to get even longer in the coming years, and scientists are predicting that the widest parts - which can stretch up to 3 metres (10 feet) - could soon collapse into the void.

The crack was first discovered in Google Earth images from 2014 by geologist Joseph Cook from the Arizona Geological Survey.

Now that Cook and his team have finally visited the site, they’ve found that a whole new section opened up last year - and the crack is continuing to spread.

"When I went out to map the fissure, I realised the fissure was much longer than what was apparent in the Google imagery, almost 2 miles long in total," Cook told Jeanna Bryner at Live Science.

"I am sure the length of this fissure will increase over time, we are only seeing the surface crack of what collapsed, the underlying fissure is longer."

According to a local news report, the crack is located in the Tator Hills area of southern Pinal County, just 20 km (13 miles) south of Arizona City, and could pose a threat to cars driving through the area, or livestock or humans standing too close to the crumbly edge.

The crack is estimated to plunge 9 metres (30 feet) deep in some areas.

It's not immediately clear what caused the fissure to become exposed on the surface like this, but Cook suspects that heavy rains in 2014 and 2016 helped open up the surface to reveal the deep fissure below.

The underground fissure itself likely formed due to less 'natural' circumstances, Cook says, telling Bryner that extensive water withdrawal for agricultural purposes is the likely culprit.

As farmers and other industries draw water from below the surface, it leaves a series of voids in the ground that can be exposed at any time by heavy rains.

And while it's always a bit unnerving to see such a stark reminder of what human activities can do to the surface of the planet, the good news is that this isn't a sign of the impending apocalypse.... the Gates of Hell aren't opening up in the Arizona Desert.

This is actually a fairly common occurrence in the area. The Arizona Geological Survey has mapped hundreds of kilometres of these fissures so far - but none have come close to this massive crack in scale.

As Anne Stegen reports for Arizona news station, 12 News, the first part of the fissure that opened up in 2014 is more than 0.8 km (0.5 miles) longer than other fissures in the area.

"Cook ... says the southern mile is fresher, and may have reached the surface in the 2016 monsoon," says Stegen. "It may have been a crack or void underground for years before that."

We should note that the researchers have yet to publish their research in a peer-reviewed journal, so we can't say for sure if Cook's suspicions are correct.

To figure that out, the team will need to get in there and date the sediments to figure out when they were first exposed, and they'll need to find more evidence to link the 2014 and 2016 downpours to the moment of exposure before we can really know what went on here.

But considering Cook and his team have set up 26 study sites in the area, and have so far mapped 275 km (170 miles) of similar fissures nearby, theirs is about as educated a guess as we're going to get right now.

Here are some more images of the fissure: 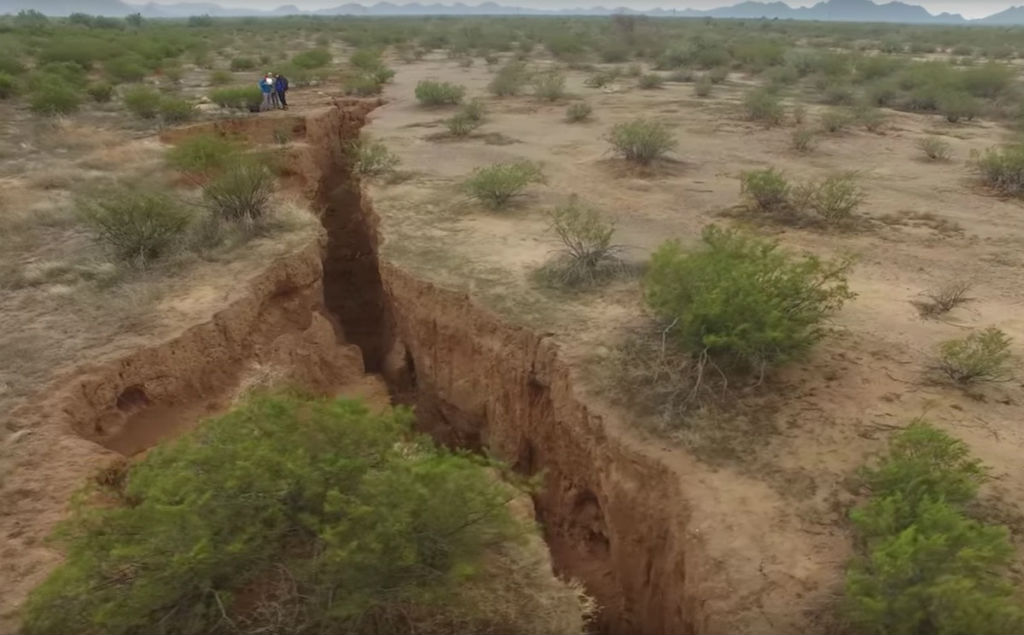