A Babylonian clay tablet dating back 3,700 years has been identified as the world's oldest and most accurate trigonometric table, suggesting the Babylonians beat the ancient Greeks to the invention of trigonometry by over 1,000 years.

The tablet, known as Plimpton 322, was discovered in the early 1900s in what is now southern Iraq, but researchers have always been baffled about what its purpose was.

Thanks to a team from the University of New South Wales (UNSW) in Australia, the mystery may have been solved. More than that, the Babylonian method of calculating trigonometric values could have something to teach mathematicians today.

"Our research reveals that Plimpton 322 describes the shapes of right-angle triangles using a novel kind of trigonometry based on ratios, not angles and circles," says one of the researchers, Daniel Mansfield.

"It is a fascinating mathematical work that demonstrates undoubted genius." 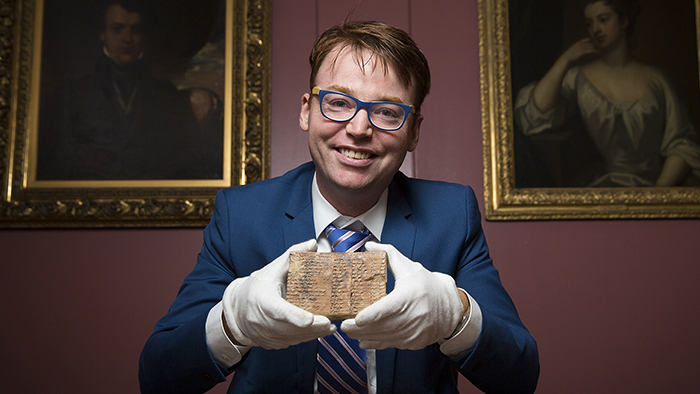 Experts established early on that Plimpton 322 showed a list of Pythagorean triples, sets of numbers that fit trigonometry models for calculating the sides of a right-angled triangle. The big debate has been about what those triples were actually for.

Are they just a series of exercises for teaching, for example? Or are they something more profound?

Babylonian mathematics used a base 60 or sexagesimal system (like the minute markers on a clock face), rather than the base 10 or decimal system we use today.

By applying Babylonian mathematical models, the researchers were able to show that the tablet would originally have had 6 columns and 38 rows. They also show how the mathematicians of the time could've used the Babylonian system to come up with the numbers on the tablet.

The researchers suggest that the tablet may well have been used by ancient scribes to make calculations for building palaces, temples, and canals.

But if the new study is right, then the Greek astronomer Hipparchus, who lived about 120 BC, is not the father of trigonometry that he's long been regarded as. Scholars date the tablet to around 1822-1762 BC.

What's more, because of the way the Babylonians did their maths and geometry, it's the most accurate trigonometric table as well as the oldest.

The reason is that a sexagesimal system has more exact fractions than a decimal system, which means less rounding up. Whereas only two numbers can divide 10 with nothing left over – 2 and 5 – a base 60 system has far more.

Cleaner fractions means fewer approximations and more accurate maths, and the researchers suggest we can learn from it today.

"This means it has great relevance for our modern world," says Mansfield. "Babylonian mathematics may have been out of fashion for more than 3,000 years, but it has possible practical applications in surveying, computer graphics and education."

"This is a rare example of the ancient world teaching us something new."

The research has been published in Historia Mathematica.

The UNSW team also produced a video explaining their findings, which you can see below: