Earth's magnetic field (aka geomagnetic field) not only determines the location of our planet's North and South poles, it also provides an amazingly powerful protective barrier that defends us from harmful solar winds and radiation.

But just how ancient are the geological forces that help sustain this magnetic field and keep us from getting all crispy? A new study finally has an answer to the geodynamo paradox that has long puzzled scientists, suggesting that the field has been functioning for some 3.4 billion years.

"The magnetic field shields us from harmful high-energy particles from space, the so-called cosmic radiation, and its existence is one of the things that make our planet habitable," said researcher Zuzana Konôpková from DESY Photon Science in Germany.

Until now, nobody was sure quite how long the geomagnetic field has made life on Earth possible. The mechanism inside our planet that generates the field is called a geodynamo, which describes the motion of liquid iron within the outer core.

Earth's innermost core is made up of solid iron, but the outer core around this is a liquid iron alloy. The way it moves – along with Earth's rotation – just happens to keep Earth safe from cosmic particles.

As for the relationship between the inner core and the outer core, and specifically how heat passes between them to create the geodynamo, scientists have struggled for decades to explain it. After all, given the insane heats, depths, and pressures involved, it's not a part of the world that's exactly hospitable to scientific study. 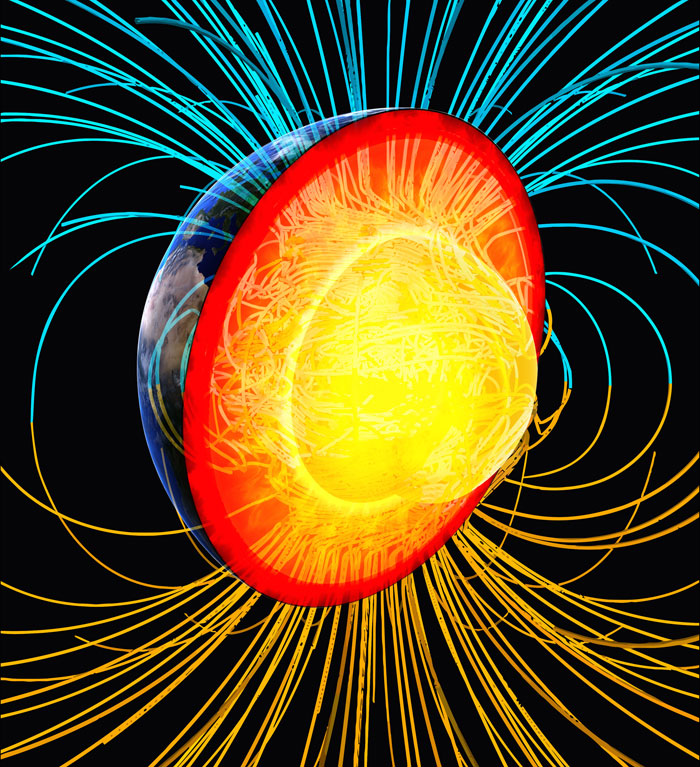 A cross-section of Earth with the field lines of the geomagnetic field. Credit: DESY

So Konôpková and her team decided to simulate the thermal relationship between the two core layers, mimicking conditions relevant to the core. "Because, of course, it is impossible for us to reach anywhere close to Earth's core and take samples for ourselves," says one of the team, Alexander Goncharov from the Carnegie Institution for Science in Washington, DC.

The researchers used a device called a laser-heated diamond anvil cell to see how efficiently iron conducts heat under extreme conditions. The tool uses an infrared laser to heat the metal until it could squeeze between two diamonds, simulating the extreme pressures at play in Earth's core.

"We measured the thermal conductivity of iron because we wanted to know what the energy budget of the core is to drive the dynamo," said Konôpková. "Generation and maintenance of our planet's magnetic field strongly depend on the thermal dynamics of the core."

The team hypothesised that if a lot of heat is transferred by the iron, as calculated in previous research, then there would not be much energy left to drive the convection that powers the geodynamo – whereas low thermal conductivity would leave more energy to generate Earth's magnetic field.

An illustration of how the diamond anvil cell is used to mimic and study planetary core conditions. Credit: Stewart McWilliams

"There's been a fierce debate among geophysicists because with [a] large thermal conductivity, it becomes hard to explain the history of the geomagnetic field which is recorded in ancient rocks," said Konôpková.

In the experiment, the team found that the iron samples heated with the laser offered relatively low thermal conductivity – meaning more energy is left over to power the geodynamo – which corresponds with the view that Earth's magnetic field has been in existence for at least 3.4 billion years.

"Our results strongly contradict the theoretical calculations," said Konôpková. "We found very low values of thermal conductivity, about 18 to 44 Watts per metre per Kelvin, which can resolve the paradox and make the geodynamo operable since the early ages of Earth."

But there's still a lot we don't know about the thermal processes at the planet's core, and the nature of this kind of research means that any findings remain highly hypothetical.

The team intends to study the thermal conductivity of non-iron metals that may have sunk to the planet's core, to see how they would affect phenomena like the geodynamo.

Then there's just the small matter of figuring out what exactly is going on with Earth's magnetic field today, which is currently in a state of flux.