Scientists Figured Out How to Toilet Train Cows, And It's Totally Genius

Can we toilet train cattle? Would we want to?

The answer to both of these questions is yes - and doing so could help us address issues of water contamination and climate change. Cattle urine is high in nitrogen, and this contributes to a range of environmental problems.

When cows are kept mainly outdoors, as they are in New Zealand and Australia, the nitrogen from their urine breaks down in the soil. This produces two problematic substances: nitrate and nitrous oxide.

Nitrate from urine patches leaches into lakes, rivers and aquifers (underground pools of water contained by rock) where it pollutes the water and contributes to the excessive growth of weeds and algae.

Nitrous oxide is a long-lasting greenhouse gas which is 300 times more potent than carbon dioxide. It accounts for about 12 percent of New Zealand's greenhouse gas emissions, and much of this comes from the agricultural sector.

When cows are kept mainly in barns, as is the case in Europe and North America, another polluting gas - ammonia - is produced when the nitrogen from urine mixes with feces on the barn floor.

However, if some of the urine produced by cattle could be captured and treated, the nitrogen it contains could be diverted, and the environmental impacts reduced. But how might urine capture be achieved?

Toilet training (but without the nappies)

In our research project, funded by the Volkswagen Foundation, we applied principles from behavioral psychology to train young cattle to urinate in a particular place - that is, to use the "toilet". 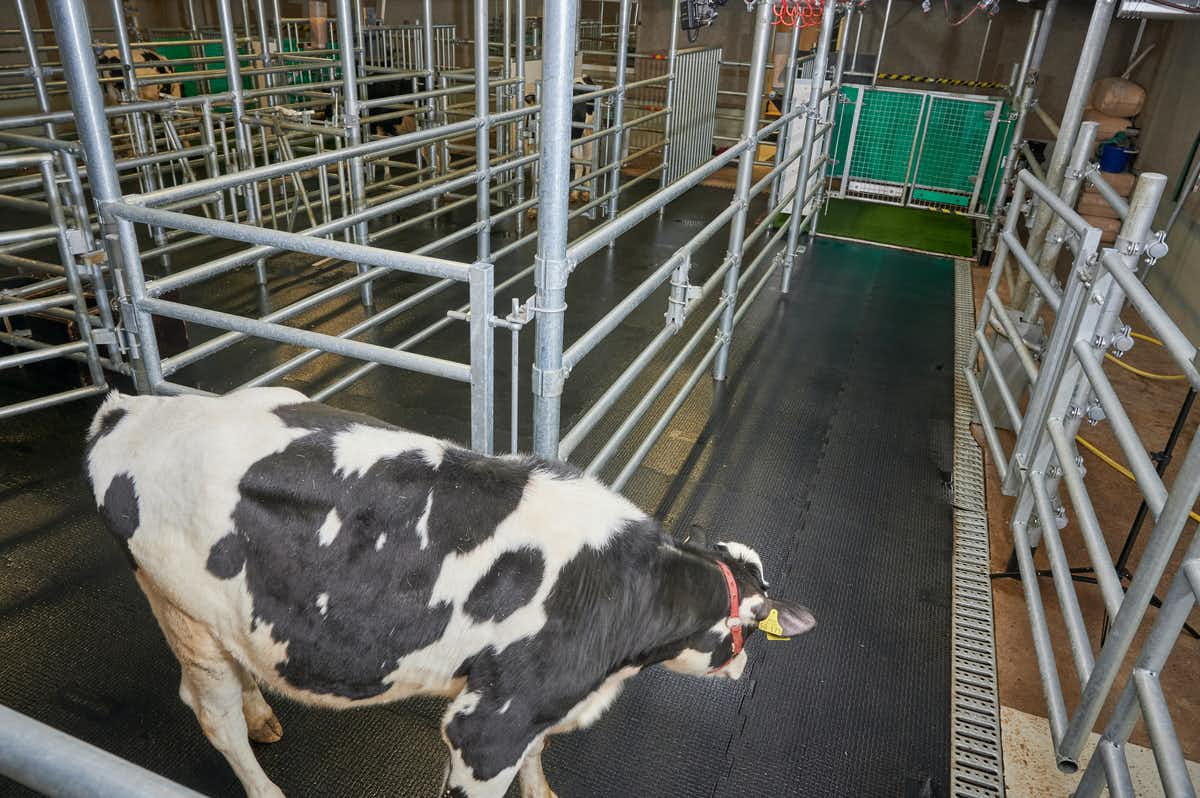 Calves were required to walk down an alley to enter the latrine pen. (Research Institute for Farm Animal Biology)

Behavioral psychology tells us a behavior is likely to be repeated if followed by a reward, or "reinforcer". That's how we train a dog to come when called.

So if we want to encourage a particular behavior, such as urinating in a particular place, we should reinforce that behavior. For our project we applied this idea in much the same way as for toilet training children, using a procedure called "backward chaining".

First, the calves were confined to the toilet area, a latrine pen, and reinforced with a preferred treat when they urinated. This established the pen as an ideal place to urinate.

The calves were then placed in an alley outside the pen, and once again reinforced for entering the pen and urinating there. If urination began in the alley, it was discouraged by a mildly unpleasant spray of water.

After optimizing the training, seven out of the eight calves we trained learned to urinate in the latrine pen - and they learned about as quickly as human children do.

The calves received only 15 days of training and the majority learned the full set of skills within 20 to 25 urinations, which is quicker than the toilet-training time for three- and four-year-old children. Calves were given a tasty treat after using the latrine pen. (Research Institute for Farm Animal Biology)

This showed us two things that weren't known before.

Our research is a proof of concept. Cattle can be toilet trained, and without much difficulty. But scaling up the method for practical application in agriculture involves two further challenges, which will be the focus in the next stage of our project.

First, we need a way both to detect urination in the latrine pen and deliver reinforcement automatically - without human intervention. The calves exited the pen through a gate. (Research Institute for Farm Animal Biology)

This is probably no more than a technical problem. An electronic sensor for urination wouldn't be difficult to develop, and small amounts of attractive rewards could be provided in the pen.

Apart from this, we'll also need to determine the optimal location and number of latrine pens needed. This is a particularly challenging issue in countries such as New Zealand, where cattle spend most of their time in open paddocks rather than barns.

Part of our future research will require understanding how far cattle are willing to walk to use a pen. And more needs to be done to understand how to best use this technique with animals in both indoor and outdoor farming contexts.

What we do know is that nitrogen from cattle urine contributes to both water pollution and climate change, and these effects can be reduced by toilet training cattle.

The more urine we can capture, the less we'll need to reduce cattle numbers to meet emissions targets - and the less we'll have to compromise on the availability of milk, butter, cheese and meat from cattle.