The European Space Agency (ESA) has just released the most accurate and detailed map of the Milky Way ever, charting the position in space of more than 1.1 billion stars in our galaxy.

The 3D map represents the first release of data recorded by the ESA's Gaia space observatory, which launched in 2013 and began scanning the sky in July 2014. In its first 14 months of operation, it pinned down the precise position of some 1,142 million stars.

Okay, so that number is totally inconceivable, but just to give you a sense of the progress we're making here, this new astrometry map contains nearly 20 times as many stars as the previous definitive celestial catalogue, plotted by the ESA's Hipparcos satellite, which operated between 1989 and 1993.

Among the 1.142 billion stars that we can now position in space, some 400 million of them were previously unknown to scientists, which means the Milky Way is an even bigger place than we thought it was. 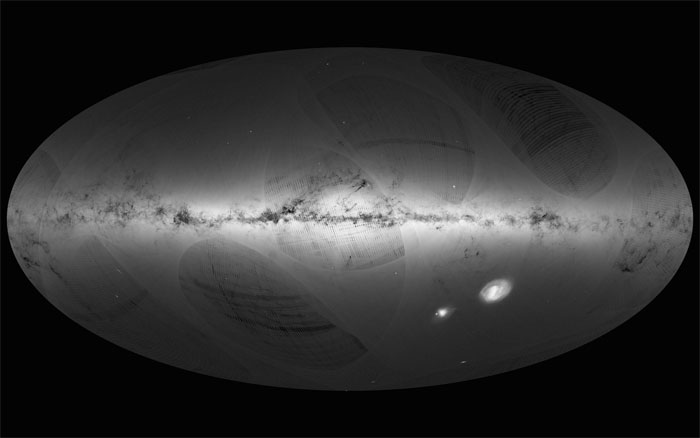 In other words, humanity's understanding of our own cosmic neighbourhood just took a huge leap forward. If you happen to get lost in the Milky Way, this is the map you want to be using from now on.

"The beautiful map we are publishing today shows the density of stars measured by Gaia across the entire sky, and confirms that it collected superb data during its first year of operations," says Gaia project scientist Timo Prusti.

"Although the current data are preliminary, we wanted to make them available for the astronomical community to use as soon as possible."

Overseeing the stream of Gaia's raw data on over a billion stars – and ensuring that the stellar positions and brightnesses recorded were accurate – involved the efforts of some 450 European scientists and software engineers.

And all that effort doesn't just tell us about the position in space of these 1.142 billion stars. By comparing Gaia's observations with the data from two previous star maps – the Hipparcos and Tycho–2 catalogues – the scientists were able to estimate distances and motions for around 2 million stars, giving us an unprecedented view of the physical movement of stars through the galaxy.

The greater reach of Gaia's telescopes also means we can see further into space than ever before.

The probe – located about 1.5 million kilometres (932,000 miles) away from Earth – packs a 1 billion-pixel camera, and is capable of measuring the diameter of a human hair from 1,000 kilometres away.

That intense gaze is paying off, and means we can now pick up stellar clusters previously hidden from view.

"With Hipparcos, we could only analyse the 3D structure and dynamics of stars in the Hyades, the nearest open cluster to the Sun, and measure distances for about 80 clusters up to 1,600 light-years from us," says Antonella Vallenari from the Istituto Nazionale di Astrofisica (INAF) in Italy.

"But with Gaia's first data, it is now possible to measure the distances and motions of stars in about 400 clusters up to 4,800 light-years away."

Perhaps the most exciting thing about all of this is that Gaia is only just getting started. Those stripey patterns that kind of look like cosmic fingerprints in the map above are artefacts from the probe's initial scans, and will fade in time as additional observations are taken.

Gaia's overall mission will run for five years, and was originally expected to survey 1 billion stars. The ESA scientists have already trumped that, obviously – but even though plotting 1.142 billion stars is a huge achievement, we're still only scratching the surface, as that figure represents only around 1 percent of the conservatively estimated 100 billion stars within the Milky Way.

While there's no chance Gaia will be able to survey all of these stars in its 5-year mission time-frame, the scientists are now revising their expectations of how many stars they'll find, since they've already eclipsed their initial goal.

"It looks very much like we underestimated the number of stars," one of the researchers, Floor van Leeuwen from the University of Cambridge in the UK, told the press this week. "We think we will see 2–2.5 billion stars."

It's a big new target, but given how much the ESA has already achieved with this probe, who are we to doubt them? One thing's for sure: our understanding of the galaxy we're a part of is increasing at a rapid rate, and for science and space lovers, it's an exciting time.

"Gaia is at the forefront of astrometry, charting the sky at precisions that have never been achieved before," says the ESA's Director of Science, Alvaro Giménez.

"Today's release gives us a first impression of the extraordinary data that await us and that will revolutionise our understanding of how stars are distributed and move across our galaxy."

Fifteen studies based on the Gaia research will be published in an upcoming special edition of Astronomy & Astrophysics.