Weird Growths Appear Before Batteries Explode, And Scientists Finally Got a Close-Up Look

Scientists have revealed new atomic-level images of the finger-like growths called dendrites that can breach battery compartment barriers, and go on to cause short circuits or even fires.

Understanding more about these tiny protrusions is not only going to lead to safer smartphones, it's going to help us develop stable batteries for our cars, our homes, our laptops, and all our other electrical gear in the future.

The team from Stanford University and the SLAC National Accelerator Laboratory used a technique called cryo-electron microscopy (cryo-EM), where samples are flash-frozen by being dipped into liquid nitrogen, to study lithium batteries, the type found in most consumer gear.

Cryo-EM won the Nobel Prize in Chemistry this year, providing a way of looking at molecules at the atomic scale even while they are in motion. In this study, that means molecules that can potentially cause safety hazards in batteries.

After being frozen in liquid nitrogen, the samples can be sliced up to be examined. You can see exactly what's happening at any point during a battery's charging cycle.

"This is super exciting and opens up amazing opportunities," says one of the researchers, Yi Cui from SLAC.

"With cryo-EM, you can look at a material that's fragile and chemically unstable and you can preserve its pristine state – what it looks like in a real battery ­– and look at it under high resolution."

"This includes all kinds of battery materials. The lithium metal we studied here is just one example, but it's an exciting and very challenging one."

The research looked at thousands of lithium metal dendrites and their coatings as they reacted with various electrolytes, the conducting solutions inside batteries that control discharging and recharging.

They found that the dendrites are crystalline when viewed at the atomic level: types of nanowires that prefer to grow in certain directions. They formed surprisingly solid structures as they grew, despite the occasional kink.

By bouncing electrons off the dendrite the researchers could also look at individual atom placement in both the crystal and its solid electrolyte interphase (SEI) coating. When a chemical known to improve performance was dropped in, the SEI became more orderly, which may be why the additive works so well. 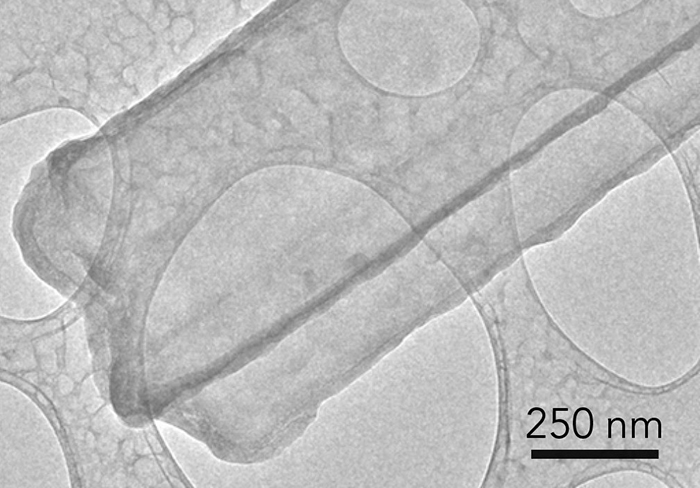 All of this information is hugely useful in producing bigger batteries and safer batteries for the future.

Dendrites are formed when the electrode inside a battery degrades, causing metal ions to collect on its surface. If those ion fingers breach the barrier between the two halves of the battery, that's when you get overheating.

Scientists have been hard at work trying to stop this from happening for a while – the same Stanford team has developed ways to stop dendrites from growing or to have batteries shut down automatically if damage is detected.

Until now though, we haven't been able to get a really close look at these tendrils as they form, which is where the new study comes in.

One of the leading alternative methods is transmission electron microscopy or TEM, but because lithium metal corrodes very quickly in air, the dendrites get damaged as soon as scientists zoomed in on them.

"[TEM is] like focussing sunlight onto a leaf with a magnifying glass," explains one of the researchers, Yuzhang Li.

"But if you cool the leaf at the same time you focus the light on it, the heat will be dissipated and the leaf will be unharmed. That's what we do with cryo-EM. When it comes to imaging these battery materials, the difference is very stark."

Dealing safely with dendrites and their associated problems means scientists will be able to develop new types of batteries, storing more energy, in the future, but there's a lot more analysis to do first.

When you eventually have an electric car that can go all week on a single charge – and without bursting into flames along the way – you might have cryo-EM to thank.

"We were really excited. This was the first time we were able to get such detailed images of a dendrite, and we also saw the nanostructure of the SEI layer for the first time," says one of the researchers, Yanbin Li.

"This tool can help us understand what different electrolytes do and why certain ones work better than others."

The team has also produced a video of the process, which you can see below: