Guys, this is not a drill. Antarctic scientists need you to study photos of penguins to help them figure out how climate change is affecting these stumpy little flightless birds.

Scientists from the UK have installed a series of 75 cameras near penguin territories in Antarctica and its surrounding islands to figure out what's happening with local populations. But with each of those cameras taking hourly photos, they simply can't get through all the adorable images without your help.

"We can't do this work on our own," lead researcher Tom Hart from the University of Oxford told the BBC, "and every penguin that people click on and count on the website - that's all information that tells us what's happening at each nest, and what's happening over time."

The citizen science project is pretty simple - known as PenguinWatch 2.0, all you need to do is log on, look at photos, and identify adult penguins, chicks, and eggs in each image. Each photo requires just a few clicks to identify, and you can chat about your results in the website's 'Discuss' page with other volunteers.

This is us RN:

A penguin census has been going on in Antarctica since 1994, and thanks to this monitoring, scientists already know that climate change has caused a decline in Adelie and Chinstrap penguins due to declining habitats and changes in food species.

But there are a growing number of pressures on the animals that researchers simply need more data to understand, and seeing as penguins don't really enjoy being followed around by scientists, camera traps are our best way to get an insight into remote populations. (Robot penguin spies are being used by other research teams, just in case this project wasn't adorable enough).

The team is also analysing climate, pollution, and fisheries research from the area, and will combine this with the results from PenguinWatch 2.0 to look for any patterns in what's affecting populations - for example, earlier this year, 150,000 penguins died after an iceberg blocked their access to the sea for hunting.

This isn't just important for protecting penguins - it will also help scientists figure out more about what's happening to Antarctica as a whole, because penguins can be thought of as a sort of 'canary' for the continent.

"As top predators, penguins are considered sentinels of changes within their ecosystem," the PenguinWatch website explains. "Because penguins spend the majority of their life in water and fall at the top of the food chain, any variations in their populations may represent larger changes to the dynamic Antarctic ecosystem."

During the project, you'll be looking at images of Adélie, Chinstrap, Gentoo, King, and Rockhopper penguins.You can see a map of the camera locations below: 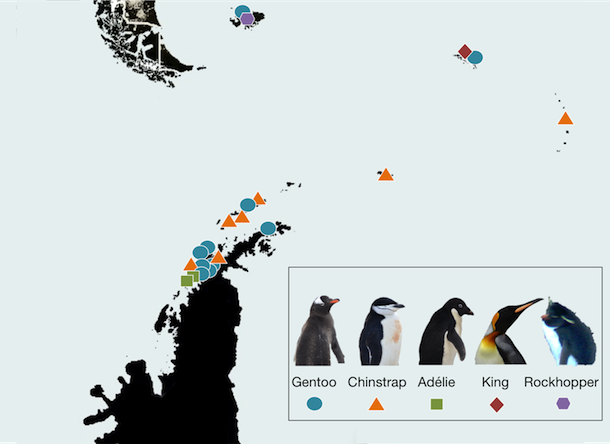 So what are you waiting for? Get looking at those cute little penguin faces and waddling legs right now, because science needs you.