If you think the weather's bad on our planet, consider the ice giants Neptune and Uranus, where intense pressures and super-hot temperatures are thought to cause cascading showers of diamonds. Now, researchers have recreated the effect here on Earth.

Using high-powered optical lasers to rapidly heat polystyrene, researchers were able to produce and then study this diamond rain in the lab, a result that could help us understand much more about the conditions on other planets like Neptune and Uranus.

It's also useful in backing up some of our educated guesses about the sort of chemical processes going on inside the ice giants of our Solar System and beyond, according to the team from institutions across the US and Germany.

"Previously, researchers could only assume that the diamonds had formed," says lead researcher Dominik Kraus, from Helmholtz Zentrum Dresden-Rossendorf in Germany. "When I saw the results of this latest experiment, it was one of the best moments of my scientific career." 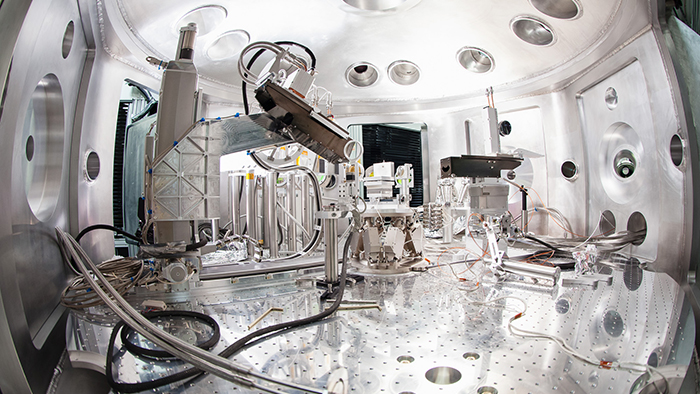 Up on Neptune and Uranus, scientists think intense pressures push the hydrogen and carbon found on the planets into diamonds – all happening about 8,050 kilometres (5,000 miles) below the surface.

There's no polystyrene on these planets, but it's a suitable chemical stand-in for the compounds formed from methane, found in abundance on Neptune and Uranus.

To recreate the effect, scientists created two shockwaves in the polystyrene plastic, using the Matter in Extreme Conditions instrument at the SLAC National Accelerator Laboratory to generate a huge amount of heat.

When the two shockwaves caught up with each other, it created temperatures of around 5,000 Kelvin (4,727 degrees Celsius or 8,540 degrees Fahrenheit) and pressures of around 150 GPa (nearly half the pressure levels at Earth's core) – similar to conditions thought to exist on Neptune and Uranus.

As a result, nearly every carbon atom in the plastic was incorporated into diamond structures just a few nanometres wide, though on Neptune and Uranus the scientists say the diamonds could go up to perhaps millions of carats in weight.

"The experimental time is very short," one of the team, Dominik Kraus from Helmholtz-Zentrum Dresden-Rossendorf, told Nicola Davis at The Guardian. "That we saw this very clear signature of diamonds was actually very, very surprising."

Knowing a reaction like this is possible helps scientists calculate the sizes of planets outside our Solar System – it's usually measured as a relationship between mass and radius, and the chemical composition of a planet can help in doing those sums.

On top of that, one of the mysteries this diamond rain experiment could help explain is why ice giants are able to generate more heat than we would expect.

Finally, the researchers hope their study will help in the production of diamonds here on Earth. In particular, artificial diamonds now created through explosives could be more efficiently made with lasers, if the research can be developed.

For now though it's another example of how science can help us understand planets many billions of kilometres away from us, even if we've got no chance of visiting anytime soon.

"We can't go inside the planets and look at them, so these laboratory experiments complement satellite and telescope observations," says Kraus.