Courtesy from “What’s That Bug?” by Randy Anderson

The elevated posture and folded front legs of the praying mantis might lead you to believe that this cunning predator is a seemingly benign, upstanding member of the insect kingdom – but don't be fooled.

If we needed any further proof that this voracious carnivore is a threat to animals and insects alike, we now have it – with a new study by zoologists finding that praying mantises have been documented killing birds and devouring their brains across the globe.

If that makes it sound like mantises have been infected by some kind of zombie contagion compelling them to hunt down and consume our feathery friends, don't worry – that hasn't happened (at least as far as we're aware). The truth is this is just an amazing natural behaviour.

But while it has been known that mantises infrequently prey upon small vertebrates – also including frogs, lizards, and snakes – in addition to their regular fare of arthropods, up until now scientists weren't clued in on how universal the bird buffet was.

"The fact that eating of birds is so widespread in praying mantises, both taxonomically as well as geographically speaking, is a spectacular discovery," says lead researcher Martin Nyffeler from the University of Basel in Switzerland. 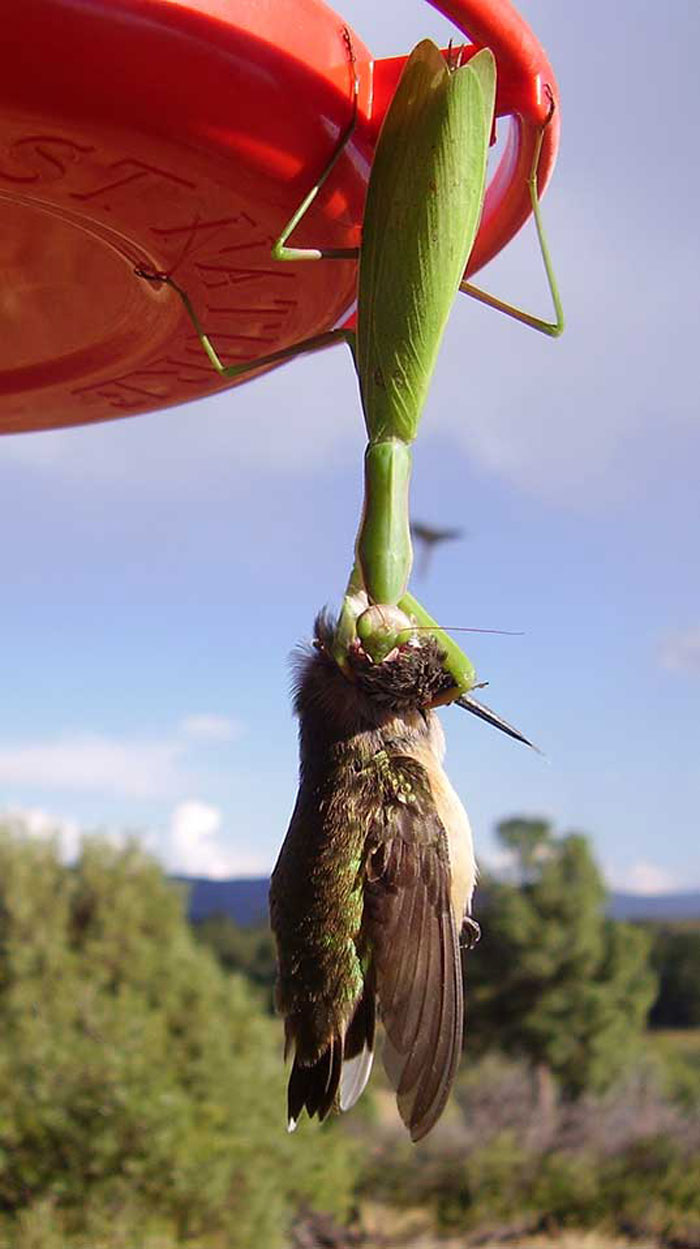 Nyffeler's team reviewed all the available scientific literature and other accounts on bird predation by mantises and found that the phenomenon has been documented in 13 different countries, on all continents except Antarctica – with mantises preying on some 24 different species of bird.

All up, the researchers found 147 cases of the behaviour that have been reported since the first documented instance back in 1864, with the majority of cases involving attacks on hummingbirds in the US, where the birds are often ambushed at hummingbird feeders in house gardens.

According to at least one of the included observations, the act is pretty gruesome, especially since mantises are known to sometimes consume their prey while they're still alive:

"The modus operandi of the mantis seems to be to approach the bird, which is always hanging downwards, and then enter the cranial cavity via one of the eyes, feeding on the brain tissues."

The attack, which may end on a flourish with a complete decapitation, is made possible by the mantis's powerful front legs – sometimes described as forearms – which enable it to capture and pretty much just incapacitate the victim. 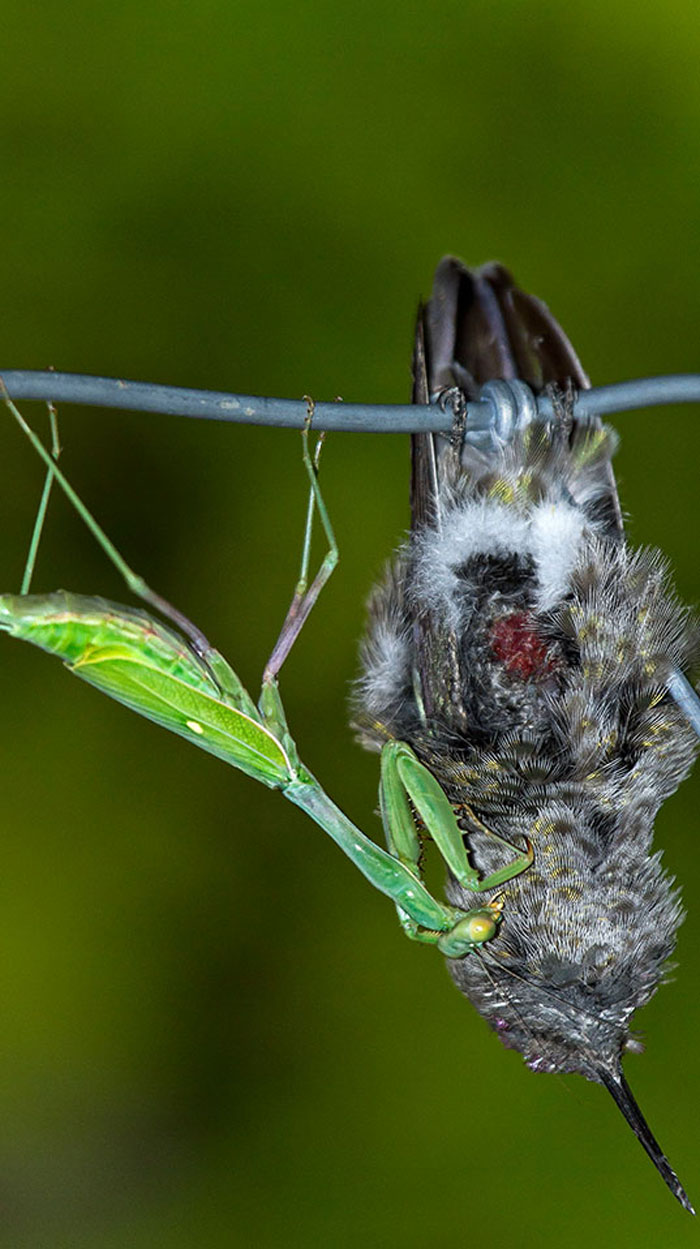 "They just hold [their prey], and they eat them while they are still alive, slowly and slowly until there is nothing left," retired forensic ecologist Dietrich Mebs from the University of Frankfurt in Germany, who wasn't involved with the study, told Newsweek.

That's certainly one word for it, but while the behaviour may definitely make some bird lovers and watchers a bit squeamish, it could also potentially represent a risk to bird numbers – especially hummingbirds in the US.

"Our study shows the threat mantises pose to some bird populations," says Nyffeler.

"Thus, great caution is advised when releasing mantises for pest control", something that has been practised in the past.

While the widespread nature of this bird hunting may come as something of a surprise to scientists, Indiana-based author and bird-watcher Kenn Kaufman says that in light of the overall scarcity of accounts recorded so far, we probably don't have to be too worried about hummingbirds on that score. 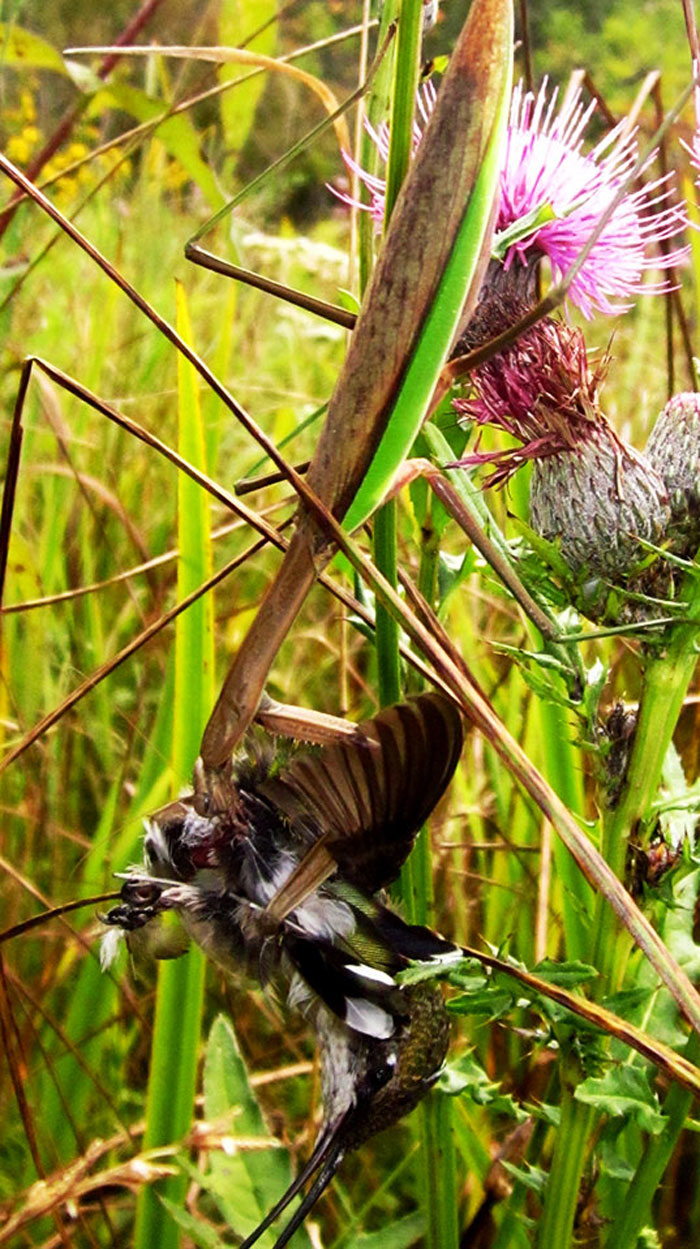 "As weird/gruesome as the behaviour seems, I don't think it represents a threat to the survival of any hummingbird species, because it doesn't happen very often relative to the total population," Kaufman told Sarah Emerson at Motherboard.

"So I'd say it's an interesting phenomenon but not a conservation concern."

The findings are reported in The Wilson Journal of Ornithology.