Rice is one of the most widely consumed foods in the world. It's also very high in arsenic compared to most other foods, absorbing about 10 times as much toxic inorganic arsenic as other cereal crops.

This is mostly due to the way rice is grown in flooded rice fields, which makes it easier for the crop to absorb the carcinogenic compounds naturally present in the soil. Contaminated groundwater is considered the greatest threat to public health in terms of arsenic exposure, in part because of its use in irrigation for rice production.

Human awareness of arsenic toxicity dates back thousands of years, but awareness of the same dangers via rice consumption is a more recent development.

Even in countries like the UK and US that do have such guidelines, there could be unseen risks, particularly to young children, who are more susceptible to arsenic exposure.

One study earlier in the year tested 55 rice varieties sold in the UK, finding that over half contained levels of arsenic higher than regulations permit for babies and children under five years of age, while another found an association between rice consumption and mortality risk due to cardiovascular disease.

"There are genuine concerns amongst the population about eating rice due to arsenic," says soil scientist Manoj Menon from the University of Sheffield in the UK.

Fortunately, for several years it's been understood that the levels of inorganic arsenic in rice can be reduced in various ways, via washing or rinsing, or using different cooking methods. However, some of these can also lower the levels of nutrients in rice, which also isn't desirable.

In a new study, Menon and his team investigated different rice-cooking methods to see which offered the best way of reducing arsenic while preserving nutrients.

They examined four processes, all of which involved cooking rice via the absorption method, using either unwashed rice, washed rice, pre-soaked rice, or parboiled rice.

When they analysed the results, they found the parboiling with absorption method (PBA) reduced the most arsenic from the rice, while preserving its nutrients. 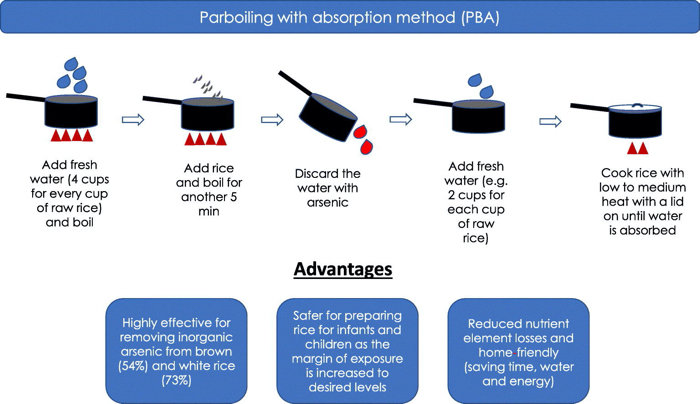 To do this at home, the researchers say you can bring water to the boil (four cups of fresh water for every cup of raw rice). Then, add rice and boil for another 5 minutes. Next, discard the water (which has now removed much of the arsenic that was in the rice), and add more fresh water (two cups for each cup of rice). Finally, cover the rice with a lid, and cook on a low to medium heat until the water has been absorbed.

"With our new method we are able to significantly reduce the arsenic exposure while reducing the loss of key nutrients," Menon says.

"We highly recommend this method while preparing rice for infants and children as they are highly vulnerable to arsenic exposure risks."

According to the researchers, this technique removes about 54 percent of the inorganic compound in brown rice, and about 73 percent in white rice, while generally retaining the most amount of the nutrients phosphorous, potassium, magnesium, zinc and manganese.

In addition to arsenic removal and nutrient preservation, the researchers say the PBA method uses less water, energy and cooking time than other cooking methods that can remove the arsenic, such as using and discarding excess water (which also removes more nutrients).

The researchers acknowledge their experiment ought to be repeated in different environments, using different kinds of regional rice types, and different levels of water quality. But it's a good first step.

The findings are reported in Science of The Total Environment.