The head of a phantom midge larva. (Evan McKenzie)

Apart from fish, scientists have found only one other animal that can regulate its buoyancy in the water using swim bladders, and it's probably not what you were expecting.

The phantom midge is a type of lake fly (genus Chaoborus), but before it can take to the air, its larvae must first grow up in the water. Because these glass worms are see-through, we've known since 1911 that they contain two pairs of gas-filled sacs on either end of their body.

For more than a century, we had no idea how the insects controlled those strange organs. Now, a trick of the light has accidentally revealed the answer.

In 2018, zoologist Philip Matthews noticed a bunch of larvae swimming in a rain-filled cattle tank.

"These bizarre insects were floating neutrally buoyant in the water, which is something you just don't see insects doing," recalls Matthews.

Unlike a fish, oxygen gas cannot be actively transported into the air-sacs of a phantom midge because insects don't have enclosed circulatory systems with oxygen-transporting red blood cells like vertebrates.

So how do their organs inflate and deflate to achieve neutral buoyancy? 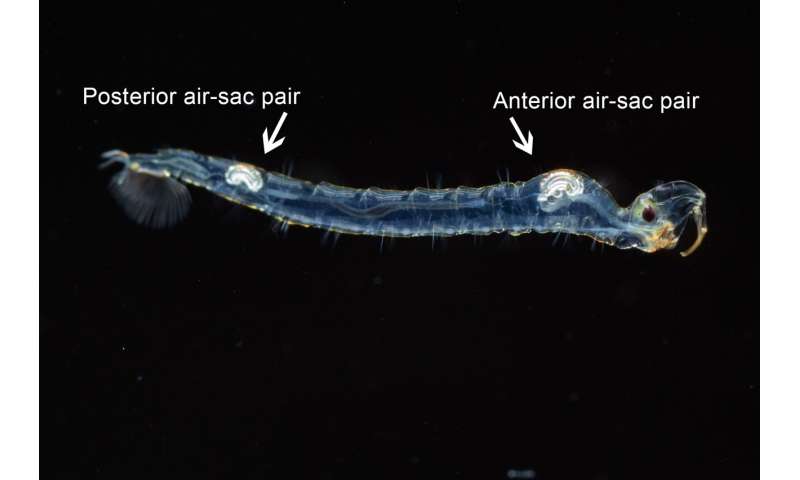 On a whim, Matthews took some of the larvae back to the lab and put them under a microscope. When he turned on ultraviolet light to illuminate the microscope's stage, he noticed the air-sacs started to glow a bright blue.

The color suggested the sacs were made of a protein known as resilin, which has elastic, rubber-like qualities. In an alkaline setting, resilin is known to swell, but in a more acidic environment, the protein contracts.

To investigate further, Matthew's PhD student and lead author of the new study Evan McKenzie began experimenting with the larvae's actual air-sacs in the lab, artificially inflating and deflating them with acidic or alkaline exposures.

By doing so, McKenzie could indirectly push air in and out of the sacs. 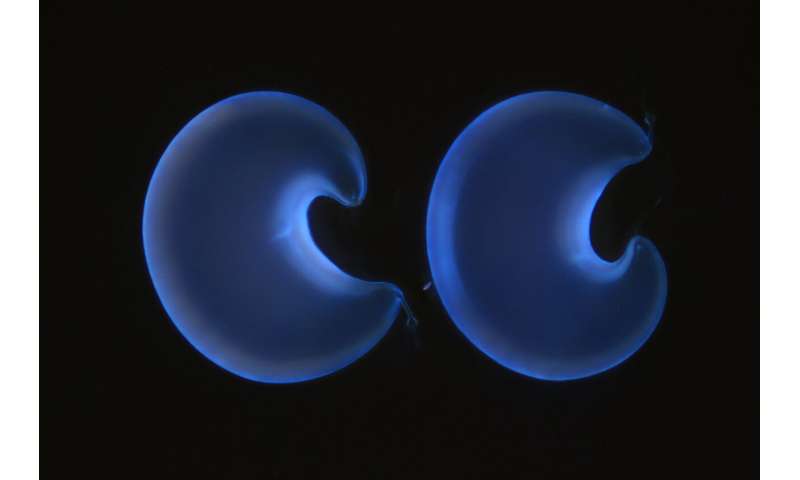 "This is a really bizarre adaptation that we didn't go looking for," says Matthews.

"We were just trying to figure out how they can float in water without sinking."

Instead, they found phantom midge larvae could sink, rise, or float simply by manipulating the pH of their air-sac walls. This then allows gas to passively diffuse in and out, without the need for oxygen-carrying blood to inflate or deflate the organs.

The whole process works like a mechanochemical engine, the authors say, "transforming pH changes into mechanical work against hydrostatic pressure."

The motor is unlike anything else we've found in the animal kingdom, and it's so easy to use that some phantom midges can travel very deep into the water.

In Lake Malawi in East Africa, for instance, one species of phantom midge (C. edulis) has actually been found more than 200 meters (656 feet) down, in a low oxygen environment perfect for evading predators.

The new research suggests these larvae don't even have to swim to get there; all they have to do is sink.