The world's richest pirate may have eluded capture in life, but efforts to bring him in are still underway – for science, if not justice.

Samuel 'Black Sam' Bellamy went down with his wrecked ship, the Whydah, along with over 140 of its crew, in a violent storm off the coast of Cape Cod in 1717. Fast-forward a few centuries, and Black Sam himself may now end up being the plunder in his own unlikely epilogue.

The wreck of the Whydah was discovered in 1984, with explorers subsequently turning up various artefacts of the galley, such as its bell and a small brass placard.

Of Black Sam, no sign was ever found – until researchers last year noticed a human bone jutting out from a fused mass of sand and other detritus attached to the wreck. Could it be?

This week, archaeologists at the Whydah Pirate Museum extracted the ancient femur from the 1,630 kilogram (3,600 pound) mass, and scientists from the University of New Haven will now attempt to source a DNA sample from the bones – in the hope it might be matched with DNA from a living descendant of one of Black Sam's siblings. 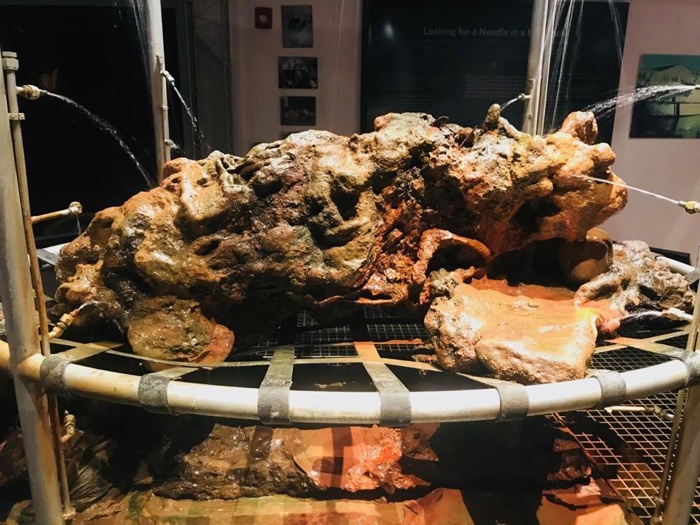 The mass extracted from the wreck (Whydah Pirate Museum)

Yep, it does sound a little like one of the occult-oriented storylines from Pirates of the Caribbean – in which pirate skeletons of yore have their true selves revealed under the grace of moonlight (except with modern-day genetic analysis instead).

But the team is totally serious, reasoning that because the bone was wedged in close proximity to what's thought to have been Bellamy's pistol – alongside other bones, plus coins, glass, and tools – there's a good chance the femur could also belong to the infamous (though seemingly good-natured and chivalrous) pirate.

It's not yet known whether the recovered bone will retain sufficient DNA for the purposes of the imminent analysis, but the research team is hopeful.

"Being submerged is a plus because it didn't allow any air to get in," one of the team, Claire Glynn, told the Cape Cod Times.

"Oxygen is a big proponent of degrading DNA."

When Black Sam went down with his crew, he was just 28 years of age, but his short stint in piracy – he'd sailed under black for little over a year – brought him swift success.

This included the command of 53 captured vessels, not to mention the possession of an estimated 5 tons of gold, ivory, and other treasures (among them, as many as 30,000 pounds sterling), stashed in the Whydah's hold.

Not a bad earning year for a scoundrel, and enough to earn Bellamy the distinction of being recognised as the wealthiest pirate in recorded history (with a net worth of around US$120 million), and if his good fortune holds – ie. the bone(s) in that amalgamated mass of pirate haul turn out to be his – this long-lost soul could be poised to reap a final reward.

Forensic scientist Timothy Palmbach, who will oversee the DNA testing to determine if the femur is indeed Black Sam's, says if the genetic match is a success, the remains will finally be repatriated to his place of birth, England, for a burial that's well overdue.

"If it's Bellamy," Palmbach told the Cape Cod Times, "it's time to bring Bellamy home."