Scientists Think They Have Spotted a Mysterious 'Legendary' Orca Species

An elusive type of orca, rarely heard of and even more rarely seen, may have just been spotted in the wild.

In the icy waters off Cape Horn on the southern tip of Chile, scientists have filmed an entire pod of the legendary "Type D" orca.

Over the years, evidence of Type D has been sporadically collected. Tourist photographs. Fisherman tales. One mass stranding on Paraparaumu Beach in New Zealand in 1955. These sightings formed the basis of a 2010 paper describing this distinct group.

Just a few years ago, in 2015, researchers obtained the first known video footage of the orcas.

But now we're homing in. Scientists from the US National Oceanic and Atmospheric Administration (NOAA) aboard the research vessel Australis got close enough to the orcas to take three tissue samples.

Tissue and tooth samples were taken from the 1955 stranding, preserved, and finally analysed in 2013. They showed that Type D is genetically distinct from the other three known orca types, and that it diverged from other orcas around 390,000 years ago.

If the tissue samples from the Cape Horn orcas match the Paraparaumu Beach orca samples, we might finally learn more about these mysterious animals.

"We are very excited about the genetic analyses to come," said marine ecologist Bob Pitman of NOAA Fisheries' Southwest Fisheries Science Center, who has been searching for the orca for over 14 years.

"Type D killer whales could be the largest undescribed animal left on the planet and a clear indication of how little we know about life in our oceans."

Of all the killer whales, Type D are the most visually distinct. They have bulbous foreheads similar to those of pilot whales, a more narrow and pointed fin, smaller teeth, and smaller white spots behind their eyes.

They also live in extremely inhospitable waters - the turbulent, frigid seas just outside the Antarctic circle. For that reason, researchers have proposed "subantarctic killer whale" as a common name.

But the other types are distinct from each other, too. Type A is the largest, living in open waters and feeding primarily on minke whales. 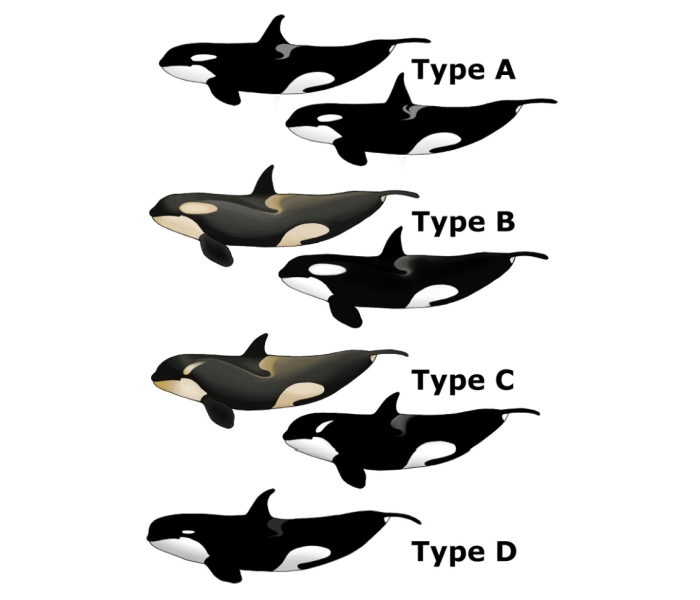 All these types could indeed be subspecies, or even distinct species. For now, all orcas are described under a single species, Orcinus orca.

Now, researchers have a wealth of information to unpack. The team spent three hours observing and collecting data on the orcas, and came home with plenty to study.

There are the tissue samples, collected with a crossbow dart that doesn't harm the animals. There's video footage of the 30-strong pod, taken both above and below the surface of the water, which could help study their social behaviour. There are recordings of their calls - those can be compared to the songs of other orcas.

The International Union for the Conservation of Nature noted all the way back in 2008 that "the taxonomy of this genus is clearly in need of review, and it is likely that O. orca will be split into a number of different species or at least subspecies over the next few years."

That note has since been scrubbed from their website, but perhaps this discovery will prompt researchers to take a closer look.