Hundreds of graves have been unearthed in France, some containing the shackled remains of individuals who might have served as slaves at the time of the Roman Empire, during the second half of the 2nd century AD.

The team, from the French National Institute of Preventative Archaeological Research (Inrap), found the site last year, and just a few months ago discovered that it was littered with human remains.

The site is located in what was once a Gallo-Roman necropolis - a large and elaborately decorated cemetery - about 250 metres to the west of a large amphitheatre in the town of Saintes. This amphitheatre is said to have been erected during the reign of emperor Tiberius so the public could watch gladiatorial battles, before being closed down by emperor Claudius. At its peak, it could hold between 12,000 and 18,000 people. According to George Dvorsky at io9, “The remains of the dead would be ushered through the 'Door of the Dead’ and buried in the nearby necropolis."

Not only did the necropolis excavation reveal several double burials and one group burial - containing five adult and juvenile bodies - but it also turned up several shackled skeletons. Three adult male skeletons were found with iron shackles that had been ‘hot-riveted’ around their ankles in life, which means they were never coming off, except by the heat of a furnace.

Another adult of unidentified gender was found wearing what the archaeologists refer to as a “bondage collar” around their neck, and the skeleton of a child was found with a weaker constraint around their wrist.

The team found no goods buried with these skeletons, except in one grave containing the remains of a small child, who was buried with seven vases. This suggests that the remains that have been so far discovered belonged to those who were very poor in life, perhaps slaves. But the researchers have been careful not to comment on the possible social status of those buried in the necropolis graveyard just yet, announcing that this is something they will continue to investigate, as well as trying to figure out how each of the individuals died.

This is one of a string of odd burials discovered by archaeologists this year, with 'vampire burials' analysed just last month, preceded by a 'witch' burial of a little girl. Who knows what grisly discoveries 2015 will bring... 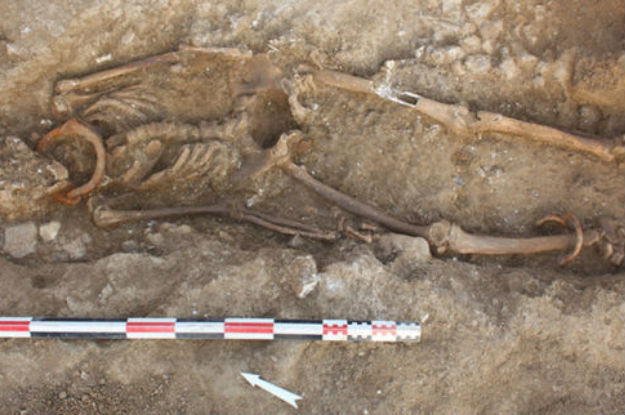