For astronomers, astrophysicists, and cosmologists, the ability to spot the first stars that formed in our Universe has always been just beyond reach. On the one hand, there are the limits of our current telescopes and observatories, which can only see so far.

The farthest object ever observed was MACS 1149-JD, a galaxy located 13.2 billion light-years from Earth that was spotted in the Hubble eXtreme Deep Field (XDF) image.

On the other, up until about 1 billion years after the Big Bang, the Universe was experiencing what cosmologists refer to as the "Dark Ages" when the Universe was filled with gas clouds that obscured visible and infrared light.

Luckily, a team of researchers from Georgia Tech's Center for Relativistic Astrophysics recently conducted simulations that show what the formation of the first stars looked like.

The study that describes their findings, published in the Monthly Notices of the Royal Astronomical Society, was led by Gen Chiaki and John Wise – a post-doctoral researcher and associate professor from the CfRA (respectively).

Based on the life and death cycles of stars, astrophysicists theorize that the first stars in the Universe were very metal-poor. Having formed about 100 million years after the Big Bang, these stars formed from a primordial soup of hydrogen gas, helium, and trace amounts of light metals.

These gases would collapse to form stars that were up to 1,000 times more massive than our Sun.

Because of their size, these stars were short-lived and probably only existed for a few million years. In that time, the new and heavier elements in their nuclear furnaces, which were then dispersed once the stars collapsed and exploded in supernovae.

As a result, the next generation of stars with heavier elements would contain carbon, leading to the designation of Carbon-Enhanced Metal-Poor (CEMP) stars.

The composition of these stars, which may be visible to astronomers today, is the result of the nucleosynthesis (fusion) of heavier elements from the first generation of stars.

By studying the mechanism behind the formation of these metal-poor stars, scientists can infer what was happening during the cosmic 'Dark Ages' when the first stars formed. As Wise said in a Texas Advanced Computer Center (TACC) press release:

"We can't see the very first generations of stars. Therefore, it's important to actually look at these living fossils from the early universe, because they have the fingerprints of the first stars all over them through the chemicals that were produced in the supernova from the first stars."

"That's where our simulations come into play to see this happening. After you run the simulation, you can watch a short movie of it to see where the metals come from and how the first stars and their supernovae actually affect these fossils that live until the present day." 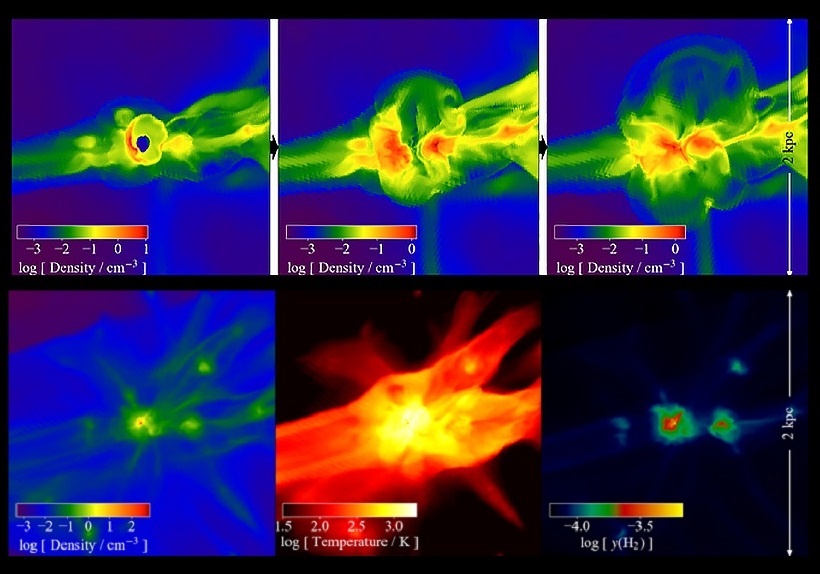 For the sake of their simulations, the team relied predominantly on the Georgia Tech PACE cluster. Additional time was allocated by the National Science Foundation's (NSF) Extreme Science and Engineering Discovery Environment (XSEDE), the Stampede2 supercomputer at TACC and NSF-funded Frontera system (the fastest academic supercomputer in the world), and the Comet cluster at the San Diego Supercomputer Center (SDSC).

With the massive amounts of processing power and data storage these clusters provided, the team was able to model the faint supernova of the first stars in the Universe.

What this revealed was that the metal-poor stars that formed after the first stars in the Universe became carbon-enhanced through the mixing and fallback of bits ejected from the first supernovae.

Their simulations also showed the gas clouds produced by the first supernovae were seeding with carbonaceous grains, leading to the formation of low-mass 'giga-metal-poor' stars that likely still exist today (and could be studied by future surveys). Said Chiaki of these stars:

"We find that these stars have very low iron content compared to the observed carbon-enhanced stars with billionths of the solar abundance of iron. However, we can see the fragmentation of the clouds of gas. This indicates that the low mass stars form in a low iron abundance regime. Such stars have never been observed yet. Our study gives us theoretical insight of the formation of first stars."

A new study looked at 52 submillimeter galaxies to help us understand the early ages of our Universe. (University of Nottingham/Omar Almaini)

These investigations are part of a growing field known as "galactic archaeology."

Much like how archaeologists rely on fossilized remains and artifacts to learn more about societies that disappeared centuries or millennia ago, astronomers look for ancient stars to study in order to learn more about those that have long since died.

According to Chiaki, the next step is to branch out beyond the carbon features of ancient stars and incorporate other heavier elements into larger simulations. In so doing, galactic archaeologists hope to learn more about the origins and distribution of life in our Universe. Said Chiaki:

"The aim of this study is to know the origin of elements, such as carbon, oxygen, and calcium. These elements are concentrated through the repetitive matter cycles between the interstellar medium and stars. Our bodies and our planet are made of carbon and oxygen, nitrogen, and calcium. Our study is very important to help understand the origin of these elements that we human beings are made of."