When it comes to keeping your blood sugar in check, people with diabetes have limited options.

Medical researchers have been searching for a noninvasive alternative to the self-administered fingerprick test, or a continuous monitor with a sensor worn under the skin. Now a team of Korean researchers think they have a solution: a contact lens that keeps tabs on the glucose in your tears.

It's not the first time this has been proposed - back in 2014, Google announced it was working on a glucose-monitoring contact lens, but it has not yet eventuated - if it's still even under development.

Materials scientists Jihun Park and colleagues at the Ulsan National Institute of Science and Technology in South Korea have prototyped and tested their device on rabbits - and report that it causes no adverse reactions. 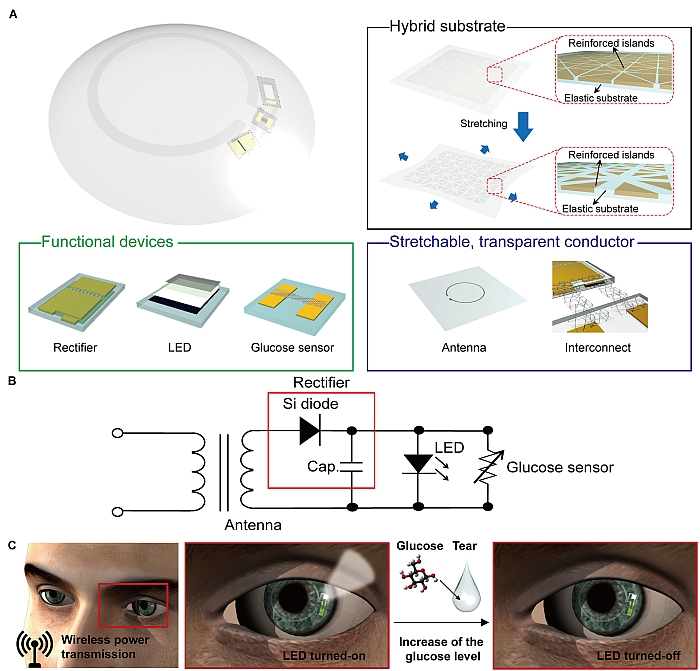 Moreover, it's soft and flexible, with only a few small rigid components, to be as comfortable as possible to the wearer. It contains neither brittle nor bulky components that could block the vision or harm the eye.

The components inside the contact lens are arrayed around the edge, away from the pupil. They consist of a glucose sensor, a small, outward-facing green LED, an antenna and a rectifier, all connected by a web of superfine, flexible wires.

The antenna and rectifier receive radiofrequency signals from a transmitter, and convert them into the tiny amount of electricity needed to power the glucose monitor and the LED.

When glucose levels spike into high, the LED - outward-facing so it doesn't interfere with vision - switches off.

This means the wearer has to look into a mirror to see it, but it does work, even though glucose levels in tears are five to 10 times less concentrated than blood glucose levels.

It sounds bulky, but the components inside the lens - even the rigid parts, such as the silicon pads in the glucose monitor - are only one hundredth the thickness of the lens itself.

The team hasn't tested the lens on humans yet, but they have tested it on rabbits. The rabbits showed no adverse reaction to the lens, the team said.

This is important particularly because the glucose monitor uses the enzyme glucose oxidase to bind to sugar - and a by-product of this process is hydrogen peroxide, which could damage or irritate the eye.

Not only was it tolerated just fine, but the research team found the lens also accurately tracked the rabbits' glucose levels.

There may be some way to go before contact lenses of this kind are ready for use by humans, but this proof of concept shows that it could be only a matter of time (and more hard work by scientists).

"We developed a method to fabricate a soft, smart contact lens that can monitor glucose levels in tears to indicate the diabetic condition in real time through a display with wireless operations," the team wrote in their paper.

The research has been published in the journal Science Advances.