Climate Change Is Turning Parts of Antarctica Green, But It's Not Grass

Environment21 May 2020
By Patrick GALEY, AFP

Parts of the Antarctic Peninsula will change colour as "green snow" caused by blooming algae is expected to spread with increases in global temperatures, research showed Wednesday.

Although often considered devoid of plant life, Antarctica is home to several types of algae, which grow on slushy snow and suck carbon dioxide from the air.

Researchers from the University of Cambridge and the British Antarctic Survey combined satellite imagery with on-the-ground observations to detect the current extent of green algae in the world's most barren continent.

They identified more than 1,600 separate green algae blooms on snow across the peninsula, with a combined surface area of 1.9 square kilometres.

"Even though the numbers are relatively small on a global scale, in Antarctica where you have such a small amount of plant life, that amount of biomass is highly significant," Matt Davey from Cambridge's Department of Plant Sciences, told AFP.

"A lot of people think Antarctica is just snow and penguins. In fact when you look around the fringe there is a lot of plant life."

The team calculated that algae on the peninsula currently absorb levels of CO2 equivalent to 875,000 average car journeys.

They also found that the majority of algae blooms were within five kilometres (three miles) of a penguin colony, as the birds' excrement is an excellent fertiliser.

The polar regions are warming far faster than other parts of the planet and the team predicted that low-lying coastal areas of Antarctica would soon be free from algae as they experience snow-free summers.

But that loss will probably be offset by a preponderance of large algae blooms as temperatures rise and snow at higher altitudes softens. 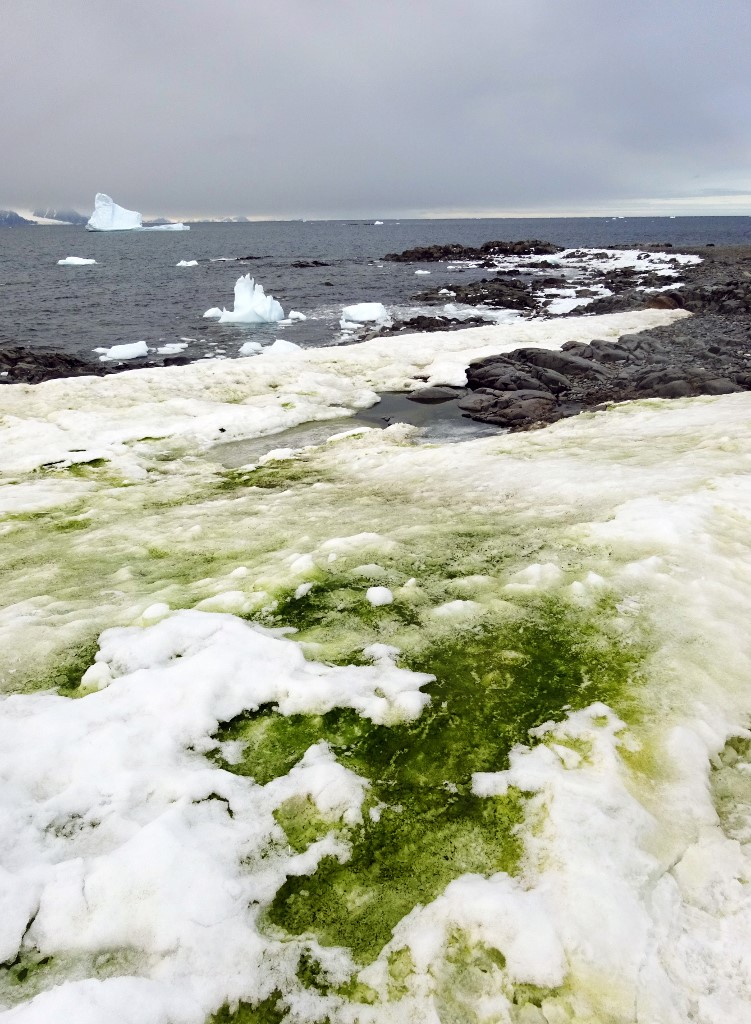 "As Antarctica continues to warm on small low-lying islands, at some point you will stop getting snow coverings on those in the summer," said Andrew Gray, lead author and researcher at the University of Cambridge and NERC Field Spectroscopy Facility, Edinburgh.

"Conversely, in the north of the peninsula we saw some really large blooms and we hypothesise that we are likely to see more of these larger blooms."

Gray told AFP that the green snow blooms on higher ground would "more than offset" the effect of sea-level algae losses.

While more algae means more CO2 is absorbed, the plants could have a small but adverse impact on local albedo – how much of the Sun's heat is reflected back from Earth's surface.

Above: Multi-coloured snow algae on Anchorage Island, in Antarctica.

Whereas white snow reflects 80 percent of radiation that hits it, for green snow that figure is closer to 45 percent.

The team however said the reduced albedo is unlikely to impact Antarctica's climate on any meaningful scale.

"There will be more carbon locked up in future just because you need snow to be in a slushier state for algae to bloom," said Evans.

"We expect there to be more suitable habitat and overall more carbon sequestration."