Soap Bubbles Look Like Magic Little Snow Globes When They Freeze, And Now We Know Why

There's something about a bubble of soapy water that causes it to freeze in a peculiar yet beautiful way. The magical-looking reaction has been an internet sensation for years now, and physicists at Virginia Tech think they finally have an explanation.

When a normal drop of water ices over, it starts at the coldest point and moves linearly over the rest of the liquid surface in what's known as a 'freeze front'. No such pattern exists for soap bubbles.

Under frigid temperatures, these soapy spheres produce a swirl of feather-like crystals that slowly morph into one, as if the whole thing were a shaken-up snow globe.

"We've seen the unique freezing dynamics of bubbles in nature, but we've never understood the physics behind it," Jonathan Boreyko, who studies condensation and frost phenomena, told The New York Times.

What else is there to do when it is minus 25 another go about frozen bubbles. #sask #exploresask #bubbles #frozen #frigid pic.twitter.com/Np1ACFvyb6

Inspired by a video on YouTube, Boreyko and his colleagues decided to investigate. The first step was to place the soapy bubbles on a chilled, icy surface within a walk-in freezer. Using high-speed cameras, the team then watched as the heat transfer began.

In this first experiment, when the surroundings were at the same temperature as the bubble, things started out relatively normal. Almost immediately upon contact, the bubble starting freezing from the bottom, as it would in a classic bottom-up freeze front. Within seconds, however, this natural flow was destabilised into tiny little 'plumes' of ice crystals, which were carried along by the upward flow of fluid.

"Hundreds of these entrained ice crystals swirled around the bubble in a dramatic fashion, which we term the 'Snow-Globe Effect'," the authors write.

"After a few seconds, the plumes dissipated and died out as the ice crystals grew larger in size. Finally, the bubble completely froze over within (10 s), not only from the bottom-up freeze front, but also especially from the floating ice crystals as they grew and interlocked together."

Why then, you might be wondering, would the crystals flow from the frozen bottom of the soapy bubble to the supposedly warmer top?

Well, as crazy as it might sound, when you freeze water, things actually heat up. This is because liquid water contains more energy than frozen water, and this means that when water freezes, it gives up some of that 'latent' energy, as shown in the diagram below.

These warm currents are what detach and carry these swirling ice crystals up and around the soapy sphere, creating multiple new freeze fronts, which send out their long, finger-like probes to connect with others.

At first these tiny crystals are too small to be seen with the human eye, but after just one second or so of Marangoni freezing, hundreds of microscopic ice particles are suspended and grown within the thin film, briefly heating the surrounding liquid.

"At this point, the gradient in temperature and surface tension is happening in a myriad of locations and directions, as opposed to the original case of a fully out-of-plane gradient extending from the bottom-up freeze front," the authors explain.

"Thus, the 'Snow-Globe Effect' annihilates the very Marangoni flow that created it in the first place." 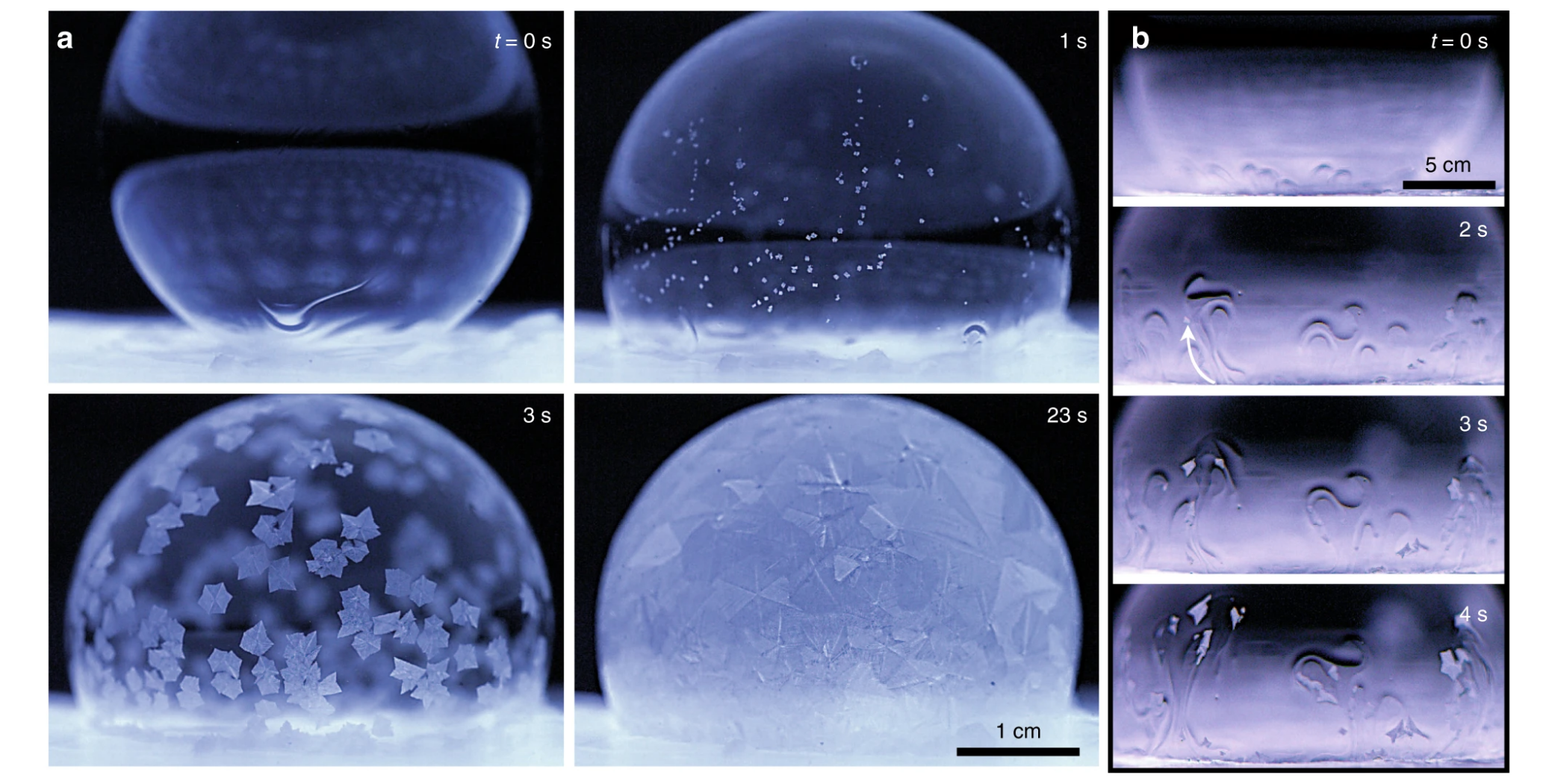 This, however, isn't always the case and is dependent on the surrounding temperature. When these soapy bubbles were placed on a chilled icy substrate in a normal room, for instance, no such snow globe was created.

Once again, the freeze front started after mere milliseconds, building from the bottom up. But this time, the phenomenon only lasted for a brief moment. After about ten seconds, the freeze front came to a halt, and the bubbles exhibited a state of "partially frozen equilibria, where the top portion of the bubble remained liquid".

Several minutes later, the liquid above began to drain into the ice below, causing the top to suddenly deflate and collapse due to ruptures in the thin film. Unlike a normal water drop or even a soapy bubble in the freezer, which both ice over quite quickly, the collapse in this case took about 10 minutes.

The authors think the unfrozen region remained untouched by ice because of poor conduction, probably due to the room, and therefore the top of the bubble, being warmer than the melting temperature of the soap solution. The diagram below summarises the two opposing forces which create this liquid-ice barrier.

"Partially frozen bubbles occur when the top of the bubble is warmer than the melting temperature, while the substrate temperature is below," the authors conclude.

"Completely frozen bubbles are observed when both the surface temperature and the temperature at the top of the bubble are subfreezing."

In 1949, long before the dawn of YouTube, the first frozen bubbles were observed on Mount Washington by the chemist and meteorologist Vincent Schaefer. Seventy years later, we at last have the answer he was looking for.