3 Holes Just Opened on The Sun, And Earth Is Being Slammed With Geomagnetic Storms

The Sun is getting up to shenanigans again, and once again Earth is going to be feeling the effects. Coronal holes have opened up on the solar surface, sending geomagnetic storms in our direction.

Holes on the Sun might sounds a bit scary, but they're very common, particularly during the solar minimum. This is the quiet period of the Sun's 11-year activity cycle, which we're currently in.

Although sunspots and solar flares are fewer, and generally smaller when they do occur during the solar minimum, that doesn't mean that we can't be hit by geomagnetic storms.

This is because of coronal holes. These are cooler, less dense regions of plasma and open magnetic fields.

These open structures allow the solar winds to escape more easily, which can in turn blow electromagnetic radiation towards Earth if the hole is in the right position.

Last week, three of these holes opened up - sending high-speed solar winds right in our directions. This means solar storms - but we don't need to brace ourselves.

The NOAA has only released a G1 level solar storm watch - the lowest level on the scale. 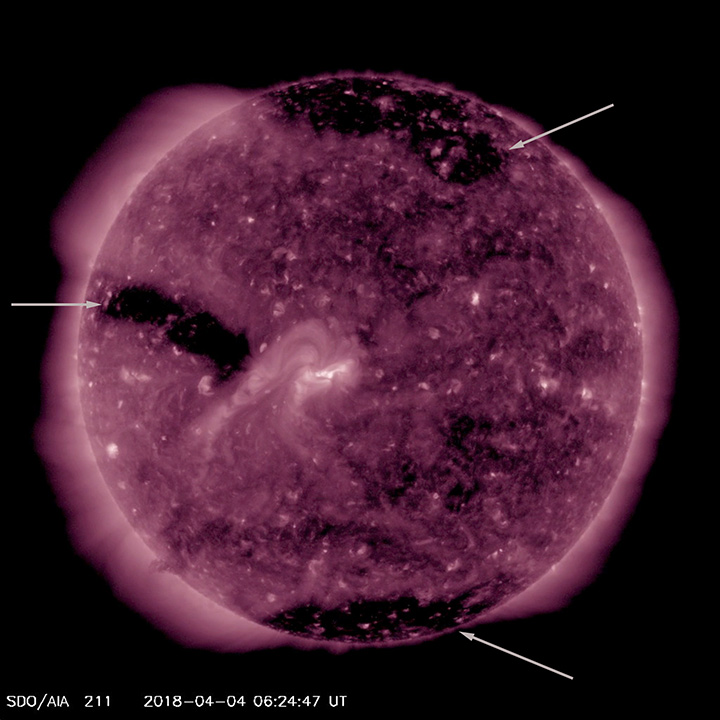 This means most of the world isn't going to notice a thing! A G1-level storm usually means only the weakest effects will be felt on Earth.

There may be some very minor power grid fluctuations, and minor interference with satellite communications, such as GPS and satellite internet and television.

You may have also heard that geomagnetic storms are responsible for marine mammal beachings, as the interference with Earth's magnetic field interferes with their internal compasses.

That might not be the case after all - a NASA study found no clear causal connection between beaching events and geomagnetic storms.

If you're at high latitudes, you might be lucky enough to see aurora borealis or australis, as the charged particles from interactions with the solar wind are channeled towards Earth's poles by the magnetic field lines, where they interact with the ionosphere for a spectacular light show.

The NOAA has a handy aurora forecast map for 30 minutes ahead and 3 days ahead.