The Universe is full of galaxy clusters, but Abell 2261 is in a class of its own. In the galaxy in the centre of the cluster, where there should be one of the biggest supermassive black holes in the Universe, astronomers have been able to find no trace of such an object.

And a new search has only made the absence more puzzling: if the supermassive black hole got yeeted out into space, it should have left evidence of its passage. But there's no sign of it in the material surrounding the galactic centre, either.

But this means that constraints can be placed on what the supermassive black hole - if it is there, evading detection - is doing.

Galaxy clusters are the largest known gravitationally bound structures in the Universe. Typically, they're groups of hundreds to thousands of galaxies that are bound together, with one huge, abnormally bright galaxy at or close the centre, known as the brightest cluster galaxy (BCG). 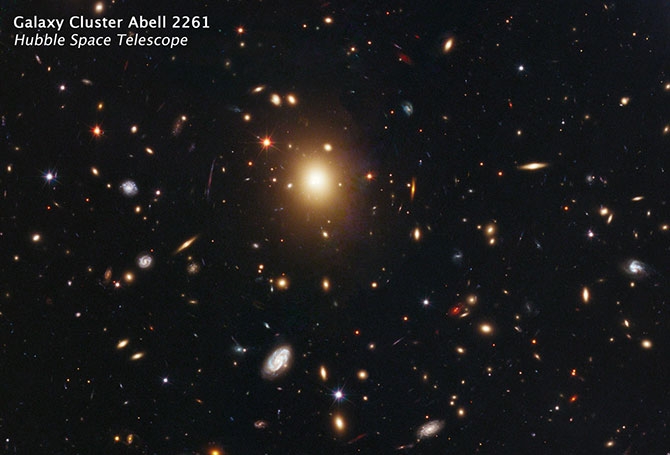 Based on the mass of the galaxy, which correlates with black hole size, there should be an absolute beast of a black hole at the core, between 3 and 100 billion times the mass of the Sun, which could make it one of the largest known black holes (the Milky Way's supermassive black hole is 4 million solar masses).

But rather than containing the radiation you'd expect from an active supermassive black hole as it churns up and superheats the material around it, the core of A2261-BCG is filled with a diffuse fog of bright starlight. Various instruments, including the Chandra X-ray Observatory, the Very Large Array and the Hubble Space Telescope, have failed to find any hint of a black hole at the centre of A2261-BCG.

Now a team of astronomers led by Kayhan Gultekin from the University of Michigan in Ann Arbor have gone back to Chandra for a set of deeper observations, based on the hypothesis that the supermassive black hole got kicked out.

It's not that wild an idea. BCGs are expected to grow when they merge with other galaxies. When this happens, the supermassive black holes at the centre of those merging galaxies would also merge, slowly spiralling in towards each other before coming together to become one bigger black hole.

Finding evidence of this would be amazing. Firstly, black hole merger recoil has yet to be detected, which means it's still hypothetical. But we also don't know if supermassive black holes can actually merge with each other.

According to numerical simulations of supermassive black hole mergers, they can't. That's because as their orbit shrinks, so too does the region of space to which they can transfer energy. By the time the black holes are one parsec apart (around 3.2 light-years), theoretically this region of space is no longer large enough to support further orbital decay, so they remain in a stable binary orbit, potentially for billions of years. This is called the final parsec problem.

There have been several clues suggesting that such a merger may have taken place at the heart of A2261-BCG. There's the size of the core, for a start. In 2012, scientists suggested that two merging black holes could have ejected a whole bunch of stars from the core, puffing up the region. This would also explain why the densest concentration of stars was 2,000 light-years from the core.

In 2017, scientists went looking for a high-density concentration of stars that would have been caught up in the gravity of such a massive object as the merged supermassive black hole as it went careening out of the galactic centre. Of the three clusters, two were ruled out and the third was inconclusive. 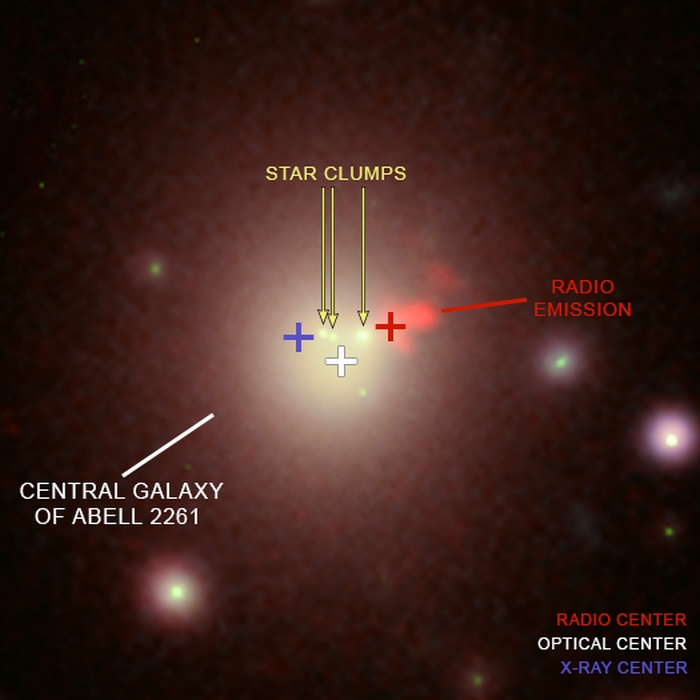 So, Gultekin and his team used Chandra for a closer look at the centre of A2261-BCG, and combined it with archival data to search for a low level of supermassive black hole activity. Radio emission had previously shown that the last supermassive black hole activity at the centre of the galaxy took place around 48 million years ago, so the team were very careful to probe that region too.

They also looked at stellar concentrations around the galactic core.

What the team did find is that the density of the hot gas decreases as the centre is approached; so the highest density of gas is not in the middle of the core, but around it. But none of the sites they examined showed any evidence of the X-radiation associated with black hole activity.

Since black holes give off no detectable radiation on their own, and we can usually only detect them when they're feeding, it's possible there is a black hole at the centre of A2261-BCG. If there is, it's either quiescent, or accreting matter too slowly to be detected by our current instruments.

The other explanation is that the black hole has been kicked much farther than we've been looking. More sensitive instruments in the future could help answer this fascinating question.

The research has been accepted by AAS Journals, and is available on arXiv.