We live in fake times. Reality is as prevalent as it ever was, of course, but it's becoming harder to find all the time.

Perhaps nowhere is this phenomenon more unsettling than in the weird world of 'deepfakes' and other computer-generated faces of people who don't actually exist (yet look uncannily like the real thing).

Scientists have now developed a technique that could help us detect whether the faces we're looking at are indeed genuine people, as opposed to phantasms conjured by artificial intelligence (AI).

According to a new preprint study led by first author and computer scientist Hui Guo from the State University of New York, the secret is in the eyes – specifically the shapes of the pupil, it turns out. 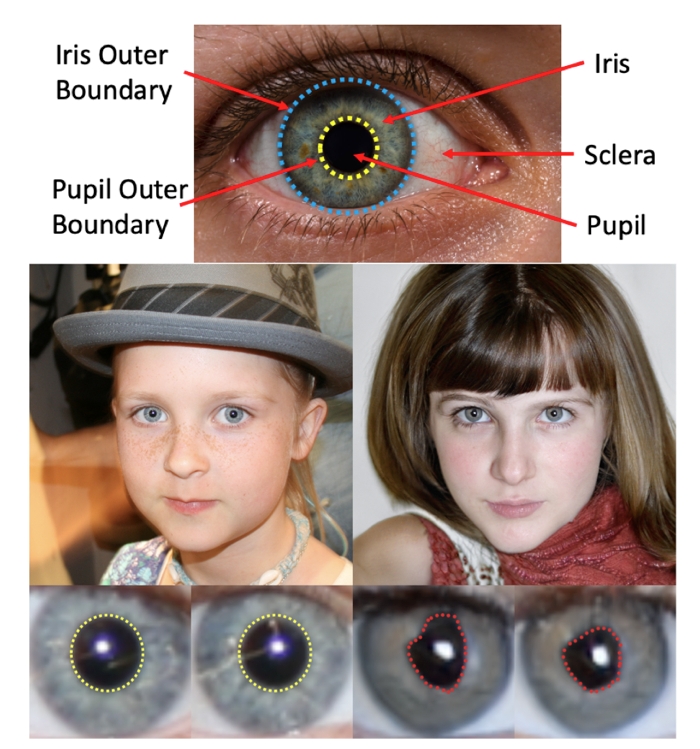 Above: A breakdown of eye anatomy including regular pupil shape (top), along with a comparison of a real face and pupils (left), with artificial ones (right).

Zooming in on the artificial eyes of fake faces created by a machine learning system called a generative adversarial network (GAN), the researchers noticed something funny about the pupils.

Unlike real pupils, many of the fakes weren't actually round.

"Pupils have near-circular shapes for healthy adults," the team explains in the study.

"Comparing with the real faces, we observe that visible artifacts and inconsistencies can be observed in the eye regions of the GAN-generated faces."

According to the researchers, this strange giveaway is due to GAN models lacking an understanding of human eye anatomy, particularly with regard to the geometrical shapes of regular pupils.

To explore how widespread this tell-tale phenomenon is, the researchers developed a detection tool that automatically extracts the outlines of pupils from eyes in photos and then evaluates them to check whether they have elliptical shapes.

In an experiment running the tool against a database of 2,000 images (1,000 being real faces, and 1,000 being fakes), the system reliably worked to distinguish the two groups.

"We found irregular pupil shapes widely exist in the high-quality StyleGAN-generated faces, which are different from the real human pupils," the researchers explain.

"We propose a new physiological-based method that can use the irregular pupil shapes as a cue to detect the GAN-generated faces, which is simple yet effective."

According to the team, technology like this could one day help counter malicious use of realistic-looking fakes used to deceive people on social media platforms, amongst other places.

At least until someone can teach the AI the proper shape of a pupil, of course.

The findings are available on the preprint website arXiv.org.