The Sun Is Being Weird. It Could Be Because We're Looking at It All Wrong

Something weird is going on with the Sun.

So far, almost every day in 2022 it has erupted in flares and coronal mass ejections, some of which were the most powerful eruptions our star is capable of.

By itself, an erupting Sun is not weird. It erupts regularly as it goes through periods of high and low activity, in cycles that last roughly 11 years.

The current activity is significantly higher than the official NASA and NOAA predictions for the current solar cycle, and solar activity has consistently exceeded predictions as far back as September 2020. But a solar scientist will tell you that even this isn't all that weird.

"We don't completely understand the solar dynamo, which generates the magnetic fields seen at the surface as sunspots, and which produce flares. This is one of the outstanding problems in astrophysics; the inaccuracy in the prediction is unsurprising."

Unsurprising, sure. But what if that very lack of surprise – that we expect to be bad at predicting solar cycles – means we need to completely rethink how we do it? What if we're basing our predictions on the wrong metric?

Solar cycles have a huge impact on the Solar System but are relatively poorly understood. Scientists have ascertained that they seem inextricably linked with the solar magnetic field, which arcs across the surface of our Sun in twists, swirls, and loops.

Roughly every 11 years, the Sun's magnetic poles flip, north becoming south and vice versa. This switch coincides with what is known as solar maximum, characterized by a peak of sunspot, flare, and coronal mass ejection (CME) activity. 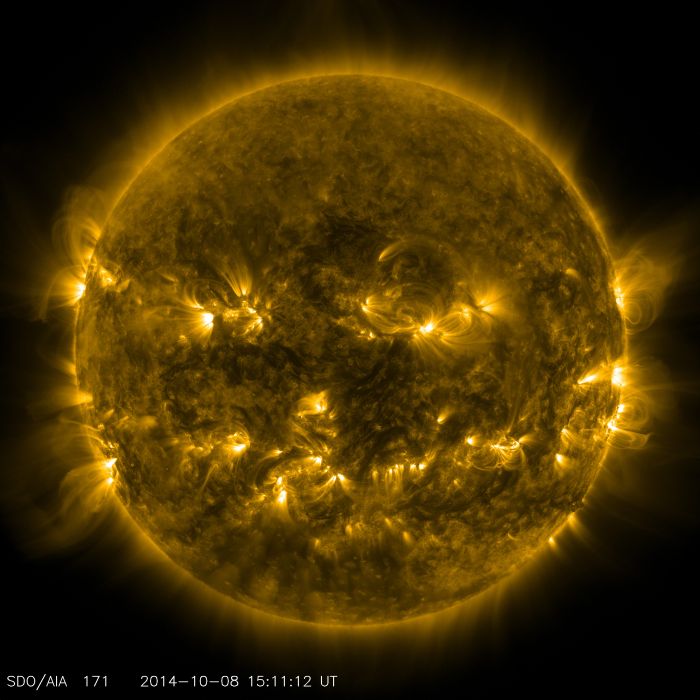 Image of the Sun from October 2014 showing how sunspots tend to appear in bands. (NASA/SDO)

Following this reversal, activity lessens, before ramping up towards a peak once more. This is where we are now – the escalation phase of the current cycle, the 25th since we started counting.

Activity cycles are characterized and predicted based on one metric: the number of sunspots seen on the Sun. These are temporary regions where magnetic fields are particularly strong, facilitating the eruption of flares and CMEs. They appear as dark spots because the magnetic field inhibits the flow of hot plasma, and the regions are subsequently cooler and dimmer than their surroundings.

According to solar physicist Scott McIntosh of the US National Center for Atmospheric Research, predicting solar cycles based on how many sunspots we count is a problem.

"The problem is that it's really not, and the underlying Hale cycle, the 22-year magnetic cycle, is the primary. And the sunspot cycle is just a tiny subset of this bigger picture."

The Hale cycle was discovered in the early 20th century by US astronomer George Ellery Hale. It consists of two 11-year sunspot cycles – the time it takes for the poles to swap twice, thereby returning to their original positions.

Hale cycles, in contrast to the 11-year cycles, are observed in a number of phenomena. These are the changing magnetic polarities of both sunspots and solar magnetic poles, as well as the intensity of galactic cosmic rays at Earth.

Solar activity makes it harder for cosmic rays to reach Earth, but the odd- and even-numbered solar cycles have different cosmic radiation waveforms. This has been attributed to the polarity of the solar magnetic field.

It's important to understand that we don't really have a good idea about what happens inside the Sun. It is thought that the solar magnetic field is generated by a dynamo inside the star, a rotating, convecting, and electrically conducting fluid that converts kinetic energy into magnetic energy, spinning a magnetic field out into space around the Sun.

If so, what causes sunspots? Well, according to current models, they are related to the Sun's rotation. The solar equator rotates faster than the poles. If straight magnetic field lines running longitudinally were to be dragged along with this rotation, they would become stretched and eventually tangled, generating temporary, localized regions of strong magnetic fields, or sunspots.

This, according to McIntosh, is predicated on the magnetic field being passive.

"You have a very complex system inside the Sun. Like all physical systems, we make simplifications or approximations to try and understand what's going on," he explained.

The animations that show this effect align very nicely with observational data of sunspots, with the initial magnetic fields appearing at about 30 degrees latitude. But, according to McIntosh and his colleagues, that's because the model was created to explain exactly this and only this.

And there is an alternative explanation: The sunspots are an interference pattern, generated by the magnetic fields of overlapping Hale cycles.

McIntosh and colleagues first noticed a pattern emerging in sunspot data in 2011, an overlap in what are called butterfly diagrams. These are graphs that plot sunspot appearances by latitude over time.

Animation showing how oppositely polarized waves, manifesting as sunspots, terminate at the equator as a new wave appears. (Scott McIntosh/NCAR)

Once they spotted this, the researchers sought out and pored over as much historical sunspot data as they could get their hands on, all the way back to the 1860s.

They found that this overlap continued to appear. Towards the end of one sunspot cycle, as the sunspots appear closer and closer to the equator, the appearance of the next cycle's sunspots can be observed at the mid-latitudes.

These are indicative, the researchers found, of oppositely polarized bands of magnetic activity making their way across the Sun in cycles; they would be responsible for the sunspot cycle, but not driven by it. Moreover, the cycles can interact; when two cycles of opposite polarity overlap, they interfere with each other.

The result of this is that the magnetic systems mutually inhibit the production of sunspots, and a period of minimal sunspot activity ensues.

"The sunspot cycle is a result of the interaction between these larger magnetic cycles," McIntosh told ScienceAlert. "In other words, it's like an interference pattern. The magnetic fields want to cancel one another all the time."

Based on the findings of the 'interference pattern', McIntosh and his team have arrived at predictions of the current solar cycle that are more in line with current observations than official predictions – the ones based on sunspot counts. 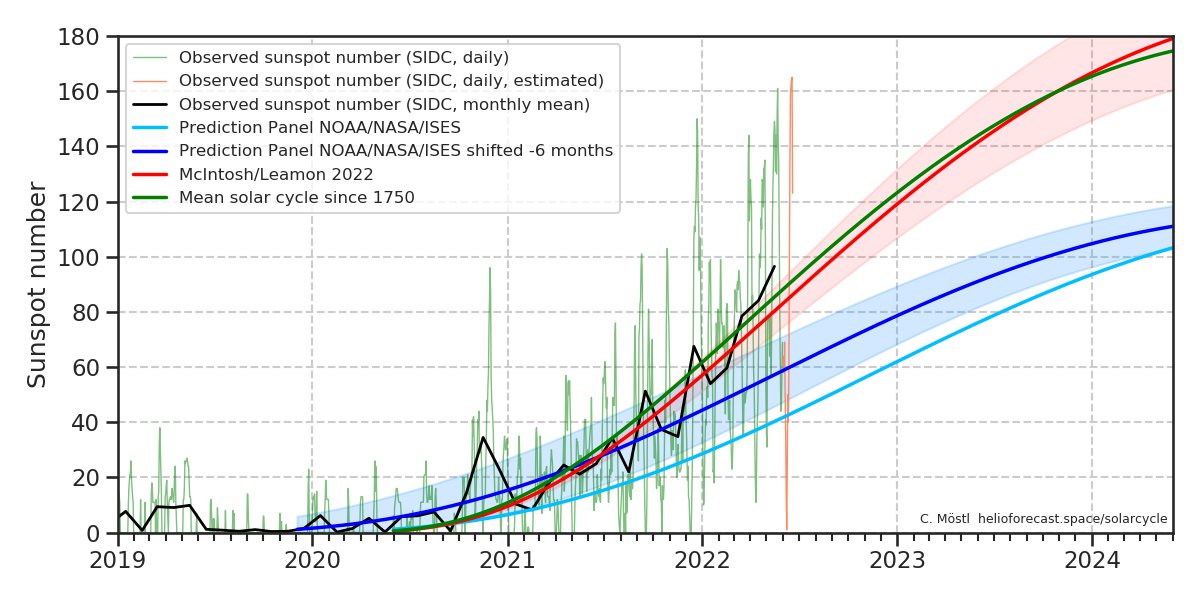 However, it's all theoretical at this stage.

We still don't know, for instance, what drives the bands of magnetic activity across the Sun; the researchers think it might be gravity waves, but we don't have enough information to be able to tell at this point.

"Scott McIntosh's ideas are interesting, and the Mcintosh/Leamon [that's Robert Leamon of the University of Maryland's Goddard Planetary Heliophysics Institute] forecast for cycle 25 is closer than the official one at this stage. However, it is not based on a physical model. I doubt it has more predictive power than the other observationally-based approaches to prediction," Wheatland told ScienceAlert.

To know more, we're going to need more data, which will take time to acquire. According to McIntosh, it means taking a look at the Sun's high latitudes, up near the poles, as a new cycle forms.

We don't usually see the solar poles, because of Earth's position orbiting the solar equator; but the European Space Agency's Solar Orbiter will be swooping over right about the time a new cycle begins.

McIntosh believes there's something to the fact his team's prediction is closer to how solar cycle 25 has been playing out. At the very least, the team's ideas deserve a closer look and some serious investigation.

"We've been pretty much spot on for about 10 years, but it's not diffusing through the scientific community," he said.

"This solar cycle provided an opportunity. Because our prediction was so diametrically opposite to what the consensus panel was showing, that means that if we end up being close, then we really need to take a second look at how stars make magnetic fields.

"Maybe it's closer to the way that we're seeing that's happening, versus the old way. And it could be a hybrid, some mix of the two. It probably is."

His team's most recent paper on the solar cycles has been published in Frontiers in Astronomy and Space Sciences.