If you've ever snapped a bundle of dry spaghetti before putting it in the pot, you know what a mess it makes. Small pieces of pasta fly off everywhere as the pieces snap into tiny bits along the middle.

The way spaghetti breaks is fascinating, though. Go get a single piece of spaghetti, grasp it firmly at each end and bend until it snaps. You didn't just get two neat pieces, did you?

It's a phenomenon that notoriously vexed Nobel-winning physicist Richard Feynman, but he wouldn't live to see the answer, which wasn't published until 2005 - 17 years after his death.

In two papers that appeared in Physical Review Letters, French scientists revealed that, when a piece of spaghetti is bent with equal force applied at each end, it will bend until it reaches a point where it snaps. The pieces will then straighten up in a rapid snap-back, which sends a burst of flexural (bending) waves, further breaking the stick in one or more places.

Pretty neat, eh? But MIT researchers had another question: is there a way to apply force to the spaghetti so that it reliably breaks into just two pieces? 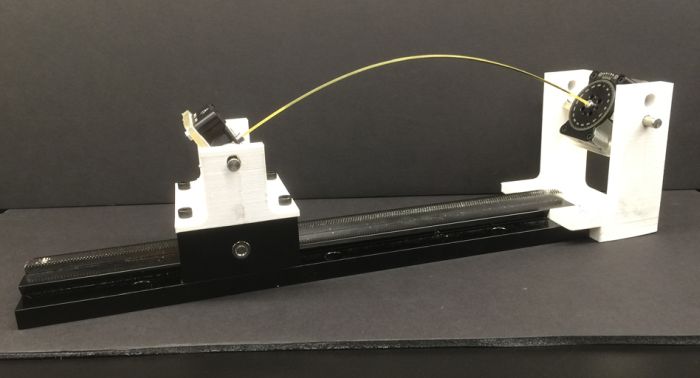 This is what a spaghetti-snapper looks like. (Heisser et al./MIT)

As it happens: Yes. Using a machine they built specifically for spaghetti-snapping, they found that if you twist the spaghetti to a certain point and then slowly bend it, it will snap into two neat pieces.

OK, so this may not help you in your quest not to spray spaghetti shards all over your kitchen. But it may have applications in other areas. (Also, this guy has your back.)

"It will be interesting to see whether and how twist could similarly be used to control the fracture dynamics of two-dimensional and three-dimensional materials," said physical applied mathematician Jörn Dunkel of MIT.

The research was initiated by two students, Ronald Heisser and Vishal Patil. Heisser had hypothesised that torsion might affect how spaghetti breaks, and experimented with twisting the pasta with his hands.

This approach had limitations in the lab, so next up he designed and built an apparatus in which the parameters of twisting and snapping could be fine-tuned.

The precision of these parameters allowed Patil to work out a mathematical model for perfect spaghetti-breaking.

The researchers found that twisting the spaghetti 270 degrees, then bending the ends together at a speed of 3 millimetres per second, breaks the spaghetti into two equal halves. They even tried it on two different thicknesses of spaghetti, and got the same result for each.

This is because the twist mitigates the snap-back effect and flexural waves, as it weakens the intensity of that initial recoil. Then the piece of spaghetti untwists itself in a corkscrewing motion.

That motion releases energy, because the twist waves travel faster than the bend waves, preventing stress from accumulating in the spaghetti.

The team also found that their mathematical modelling was accurately able to predict when a piece of spaghetti would break into four pieces, rather than two.

"Taken together, our experiments and theoretical results advance the general understanding of how twist affects fracture cascades," Dunkel said.

Hundreds of pieces of spaghetti were harmed in the process of this research, which has been published in the journal PNAS.