The composite NIRCam and MIRI image of the Cartwheel Galaxy. (NASA/ESA/CSA/STScI)

Stop what you're doing. The latest official image release from the James Webb Space Telescope is in, and it's a stunning circus of fireworks lighting up the darkness of space.

The subject is the Cartwheel Galaxy, a well-known object about 500 million light-years away, and a huge oddity: unlike most other galaxies, which tend to be relatively cohesive, it has several distinct, separated structures, the appearance of which gave the unusual object its name.

Like a cartwheel or Ferris wheel, the galaxy has a distinct outer ring, bursting with light, a much more tenuous region inside it, and a bright 'hub' – a center that is sort of halfway between a fuzzy, featureless elliptical galaxy and a structured spiral.

Previous analyses have found that this peculiar, extremely complicated structure is likely the result of a violent interaction with another, smaller galaxy: a high-speed collision that caused literal ripples of galaxy stuff expanding outward from the point of the collision.

That's the source, scientists believe, of the big ring and also the smaller, less well-defined ring you can see around the galactic center. 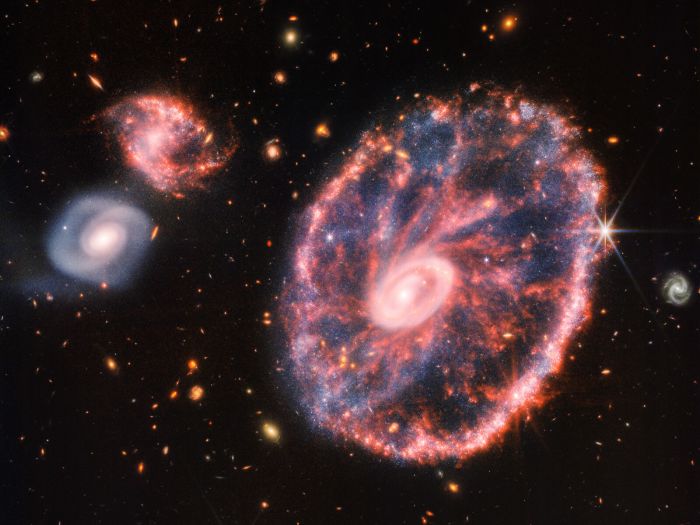 The composite NIRcam and MIRI image of the Cartwheel Galaxy. (NASA/ESA/CSA/STScI)

When galaxies interact, the results are, well, cosmic.

Not only are the galaxies in question pulled apart in interesting ways, but the resulting shocks in interstellar gas can also trigger intense waves of star formation as gas is compressed, causing massive clumps to collapse under their own gravity to form the seeds of baby stars.

This activity, most visible in the infrared wavelengths in which Webb sees the Universe, is occurring heavily in the Cartwheel Galaxy.

The outer ring is bursting with star formation and supernova activity as the ring expands into the gas of the intergalactic medium.

The inner hub of the galaxy has also been busy, filled with clusters of young, hot, massive stars.

But the Cartwheel Galaxy is very dusty, which is difficult to penetrate in some wavelengths, namely optical, in which Hubble excels.

A quick comparison of @NASAHubble's view (2018) of the Cartwheel Galaxy compared to the new @NASAWebb view (2022).

Webb's infrared and near-infrared capabilities and amazing resolution have enabled it to cut through a lot of that dust, revealing never-before-seen details in the Cartwheel Galaxy.

In the above image, the primary near-infrared instrument, NIRcam, has revealed pockets of star formation, which are colored blue, as well as orange and yellow regions of older stars and dust.

The red regions in the image are from an instrument called MIRI, which images the mid-infrared. They show the galactic dust that makes up the 'spokes' of the cartwheel – silicate dust and hydrocarbons, primarily.

Future analysis of this data is expected to reveal more about this stunning galaxy and its crazy evolution. 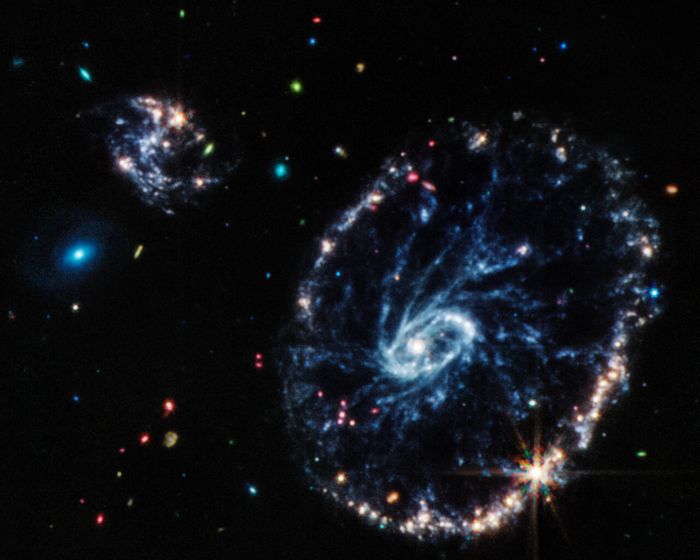 The Webb MIRI image of the Cartwheel Galaxy. (NASA/ESA/CSA/STScI)

You can see three other galaxies in these images; together, the four galaxies are known as the Cartwheel Group. None of these galaxies is the galaxy with which the Cartwheel collided around 440 million years ago – although they do show evidence of intense interactions of their own.

The irregular spiral to the top left appears to have been disrupted at some point; it's also demonstrating fireworks. The neater spiral just beneath it nevertheless has a faint tidal tail – a long stream of material pulled out by gravitational interaction with a massive object.

In fact, it's much less usual for a galaxy not to have had some altercation in its distant past. Just ask our own Milky Way.