That Starlink Problem Astronomers Were Worried About Is Totally Happening

For the modern astronomer, satellites are just a part of life. There are more than 2,000 active ones currently orbiting Earth, and the smartest minds in space photography have managed to work out clever ways of removing the occasional fly over from their images of space.

But then there's Starlink. The first stages of SpaceX's plan to launch up to 42,000 satellites to provide Earth with complete internet coverage have clocked in at 122 objects so far; after the first major launch in May, astronomers were worried.

Now a second launch has occurred, and their concerns have truly started to materialise.

In the early hours of the morning on November 18 at the Cerro Tololo Inter-American Observatory (CTIO) in Northern Chile, the trail of newly launched Starlink satellites flew overhead, absolutely filling an image taken by the Dark Energy Camera (DECam).

Each one of those dotted line trails in the image below is a Starlink satellite. 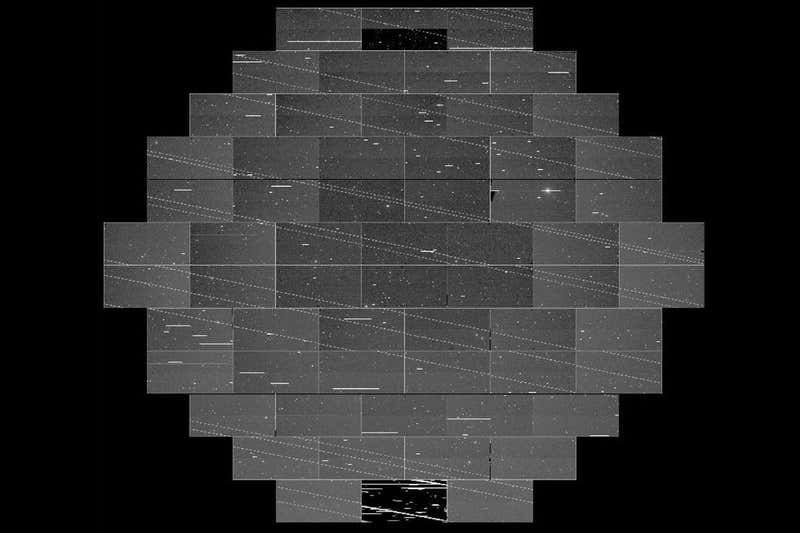 While taking about 40 exposures of the Small and Large Magellanic Clouds, SpaceX's Starlink satellite train entered the camera's vision around 90 minutes before sunrise, shining bright in the early morning sunlight and taking a whole five minutes to pass out of the telescope's view.

"Wow!! I am in shock," wrote CTIO astronomer Clara Martinez-Vazquez on Twitter. She noted there were 19 satellite trails, which is way more than a normal satellite pass.

Although most of the time the satellites will be dark in the night sky (which still presents some problems), just after the Sun goes down, or early morning when the sky is still black, sunlight can still hit the satellites, making them visible both by fancy astronomy telescopes, and just regular old binoculars.

"These things are big enough that when they're sunlit, they're bright enough to pick up with anything from binoculars and bigger," Cees Bassa from the Netherlands Institute for Radio Astronomy told Forbes.

And astronomers are not impressed. As we've reported before, they've brought up some big issues with Starlink. Firstly, there are going to be a lot of these objects in orbit, which could dramatically impact the way astronomers can see and listen to the sky.

The second batch of 60 Starlink satellites was launched just over a week ago on November 11, so they haven't yet reached their final operational altitude - but that altitude is expected to be lower than for the first batch.

Sky watchers are also finding that Starlink are more reflective then other satellites. If thousands of extra satellites weren't already a problem on their own, the fact they are extra-shiny is just another thing astronomers are pulling their hair out about.

Agreed, sent a note to Starlink team last week specifically regarding albedo reduction. We'll get a better sense of value of this when satellites have raised orbits & arrays are tracking to sun.

Astronomers can remove the trails from their images when Starlink swans into view, but much of the information scientists use is contained in the raw images, not the pretty photos we see. Additionally, it's one thing to remove a single satellite trail from an image, and another to remove 19.

So far, some people are coping by poking fun at SpaceX's Elon Musk on social media.

How astronomers and SpaceX will resolve these conflicting needs is still unknown, but with two more launches scheduled this year, there's a chance this won't be the last we'll hear about this problem.