Like many other spiral galaxies in the Universe, the Milky Way Galaxy consists of two disk-like structures – the thin disk and the thick disk. The thick disk, which envelopes the thin disk, contains about 20 percent of the Milky Way's stars and is thought to be the older of the pair based on the composition of its stars (which have greater metallicity) and its puffier nature.

However, in a recent study, a team of 38 scientists led by researchers from Australia's ARC Centre of Excellence for All Sky Astrophysics in Three Dimensions (ASTRO-3D) used data from the now-retired Kepler mission to measure starquakes in the Milky Way's disk.

From this, they have revised the official estimates on the age of the Milky Way's thick disk, which they conclude is around 10 billion years old.

The study which describes their findings – titled "The K2-HERMES Survey: age and metallicity of the thick disc" – recently appeared in the Monthly Notices of the Royal Astronomical Society. The research team was led by Dr. Sanjib Sharma of the Sydney Institute for Astronomy and the ARC Centre of Excellence for All Sky Astrophysics in Three Dimensions (ASTRO-3D) and included members from multiple universities and research institutes. 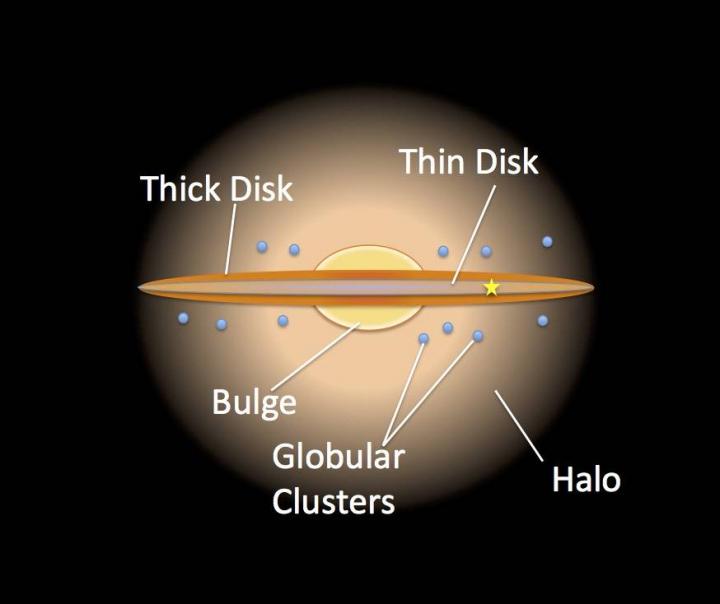 To determine the age of the thick disk, Dr. Sharma and his team employed a method known as asteroseismology. This consists of measuring a star's oscillations caused by starquakes, where the crusts of stars undergo sudden shifts similar to Earthquakes.

This process allows researchers to conduct "galactic-archaeology", where they are able to look back in time to the formation of the Milky Way (over 13 billion years ago).

As Dennis Stello – an associate professor at the University of New South Wales and a co-author on the study – explained, this allowed them to determine a star's internal structures:

"The quakes generate soundwaves inside the stars that make them ring, or vibrate. The frequencies produced tell us things about the stars' internal properties, including their age. It's a bit like identifying a violin as a Stradivarius by listening to the sound it makes."

It is important to note that astronomers are not able to detect actual "sounds" generated by stars. Instead, movements within a star's interior are measured based on changes in a star's brightness.

Previously, astronomers had noted that observations conducted by the Kepler mission did not accord with models of the Milky Way's structure – which predicted that the thick disk would possess more low-mass stars.

Until now, it was unclear if this discrepancy was due to inaccuracies in the galactic models, or due to a problem in the selection criteria of the stars. Using new data from the K2 mission, Sharma and his colleagues found that it was the former.

However, using the K2 mission data to conduct a fresh spectroscopic analysis, Dr. Sharma and his team determined that the chemical composition incorporated into existing models was incorrect, leading to inaccurate estimates of their ages. By taking this into account, Dr. Sharma and his team were able to bring asteroseismic data into alignment with what galactic models predicted. As Dr. Sharma explained:

"This finding clears up a mystery… Earlier data about the age distribution of stars in the disc didn't agree with the models constructed to describe it, but no one knew where the error lay – in the data or the models. Now we're pretty sure we've found it."

Since it was launched in 2009, the data collected by the Kepler mission suggested that there were a lot more younger stars in the thick disk than models predicted. While it was not primarily designed to conduct astroarchaeology, its ability to measure changes in a star's brightness (ostensibly due to planetary transits) are well-suited for measuring starquakes.

"Stars are just spherical instruments full of gas, but their vibrations are tiny, so we have to look very carefully," said Sharma. "The exquisite brightness measurements made by Kepler were ideal for that. The telescope was so sensitive it would have been able to detect the dimming of a car headlight as a flea walked across it."

These findings show that even after two of its reaction wheels failed in 2013, Kepler was still able to conduct valuable observations as part of its K2 campaign. The results of this study are also a strong indication of the analytical power of asteroseismology and its ability to estimate the ages of stars.

More revelations are expected as scientists continue to pour over data obtained by the mission before it ceased operations in November of 2018.

The analysis of this data will be combined with new information gathered by NASA's Transiting Exoplanet Survey Satellite (TESS) – Kepler's spiritual successor, which took to space just seven months before Kepler retired. This information will further improve age estimates for even more stars within the disk and help astronomers to learn more about the formation and evolution of the Milky Way.