Last year, British theoretical physicist Stephen Hawking hinted at research he and a couple of colleagues were working on that could solve the infamous black hole information paradox, which states that information about matter that gets destroyed by a black hole, according to Einstein's general theory of relativity, is supposed to be fundamentally conserved, according to our understanding of quantum mechanics.

Now, that paper has finally been posted online, and as hinted by Hawking back in August, the solution to this paradox could be black hole 'hairs' that form on the event horizon, making a kind of two-dimensional holographic imprint of whatever's been sucked in. He says the existence of these hairs is provable, and their existence could win him a Nobel Prize.

But let's back up a bit, because there's a lot to wrap your head around here.

First, the black hole information paradox. The problem with black holes is that according to Einstein's general theory of relativity, because of what we know about how gravity interacts with the Universe and everything in it, all information that crosses the boundary of a black hole - called the event horizon - is lost forever. Not even light is protected from this, which is how black holes got their name.

Then in the 1970s, Hawking proposed that the Universe is filled with 'virtual particles' that, according to what we know about how quantum mechanics works, blink in and out of existence and annihilate each other as soon as they come in contact - except if they happen to appear on either side of a black hole's event horizon. As Devin Powell explains over at Smithsonian.com, in this scenario, one particle gets swallowed up, and the other radiates away into space.

"The escaping radiation steals energy from the black hole as it departs, so that the black hole loses mass over time. It eventually evaporates out of existence," says Powell. "According to Hawking's calculations, the lingering radiation - the only trace of a vanished black hole - contains no useful information about how the black hole formed and what it ate."

So when a black hole disappears, according to what Hawking proposes, information is lost forever, which is a problem, because quantum mechanics states that information can never be lost. Hence the paradox. 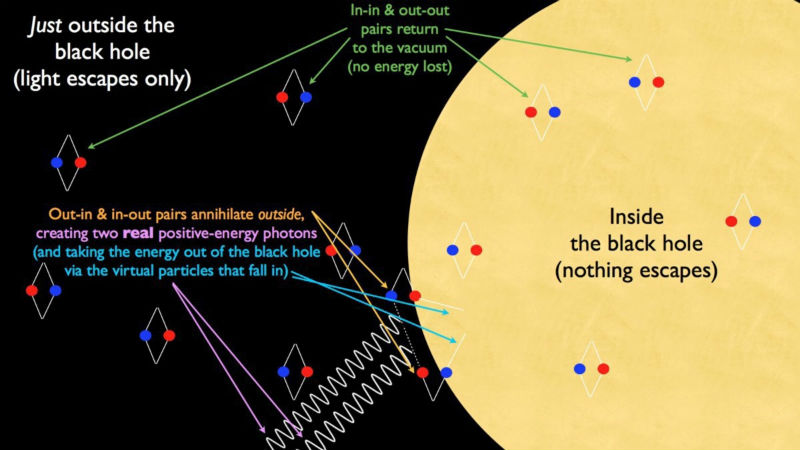 Ethan Siegel/Starts with a Bang

In 1973, American theoretical physicist John Wheeler coined the phase, "black holes have no hair", which went on to spark a great debate over whether black holes were 'bald' and featureless, or had 'hair'.

The 'hair vs no hair' debate goes like this: if black holes are bald, it means there will be no discernible difference between any of them, regardless of what information they've sucked up - they all have the same mass, electric charge, and angular momentum, and no other distinguishing features.

On the other hand, if black holes have hair - or as Michael Byrne describes them at Motherboard, "minute deformities in space-time" - then we can obtain some kind of information about what an individual black hole has consumed.

Hawking has been arguing on the 'hair' side for years, and is now saying that it can solve the black hole information paradox.

"I propose that the information is stored not in the interior of the black hole as one might expect, but on its boundary, the event horizon," Hawking said at a conference back in August 2015. "The message of this lecture is that black holes ain't as black as they are painted. They are not the eternal prisons they were once thought. Things can get out of a black hole both on the outside and possibly come out in another universe."

In the paper, which has been published online at arXiv.org, Hawking and his colleagues, University of Cambridge physicist Malcolm J. Perry and Harvard University physicist Andrew Strominger, argue that they've made some concrete, provable steps towards explaining how information can escape a black hole after being sucked in.

The idea is that when charged particles get sucked into a black hole, their information leaves behind a kind of two-dimensional holographic imprint on the event horizon. This means that while all the physical components of an object would be so totally obliterated by a black hole encounter, its blueprint lives on.

So as light particles (photons) are ejected by the black hole - a phenomenon known as Hawking radiation - they can pick up the information blueprint from the event horizon and carry it with them back into the Universe. "The information about ingoing particles is returned, but in a chaotic and useless form," Hawking said in August. "This resolves the information paradox. For all practical purposes, the information is lost."

We heard all this back in August, but now that the paper has been published online, Hawking, Perry, and Strominger's arguments can undergo the process of peer review. As the paper has yet to be submitted to a scientific journal, the peer-review process will remain informal, with scientists welcomed to submit their criticisms.

And we're already starting to hear them, as Devin Powell explains over at Smithsonian.com:

"No one has yet reported a mistake in the calculations, but concerns have begun to pop up that the theory is at best incomplete. Sabine Hossenfelder of the Nordic Institute for Theoretical Physics questions how much information the proposed soft hair could encode. She also points out that the paper does not explain how the hairs, which would disappear with the black hole once it evaporated, would transfer their information to the radiation that remains."

"I am not at all convinced that the new idea proposed by Hawking, Perry, and Strominger solves the information loss problem," Hossenfelder writes at her blog, Backreaction. "But it seems an interesting avenue that is worth further exploration."

As Perry admitted, he, Hawking, and Strominger are not 100 percent sure if this is the right answer to the black hole information paradox, but their paper is now out there for their peers to pick over everything and help them figure it out. "We're saying that it's a step on the way," he concludes.

For more info, head to Seth Fletcher's interview with Strominger over at Scientific American, where the two discuss many particulars in the paper at great length. One thing's for sure, while the details of the paper might be beyond the scope of the average person, they're ensuring that today and the months ahead will be a great time to be alive if you're a theoretical physicist.