The Universe is littered with galaxy clusters – huge structures piled up at the intersections of the cosmic web. A single cluster can span millions of light-years across and be made up of hundreds, or even thousands, of galaxies.

However, these galaxies represent only a few percent of a cluster's total mass. About 80 percent of it is dark matter, and the rest is a hot plasma "soup": gas heated to above 10,000,000 ℃ and interwoven with weak magnetic fields.

We and our international team of colleagues have identified a series of rarely observed radio objects – a radio relic, a radio halo, and fossil radio emission – within a particularly dynamic galaxy cluster called Abell 3266. They defy existing theories about both the origins of such objects and their characteristics. 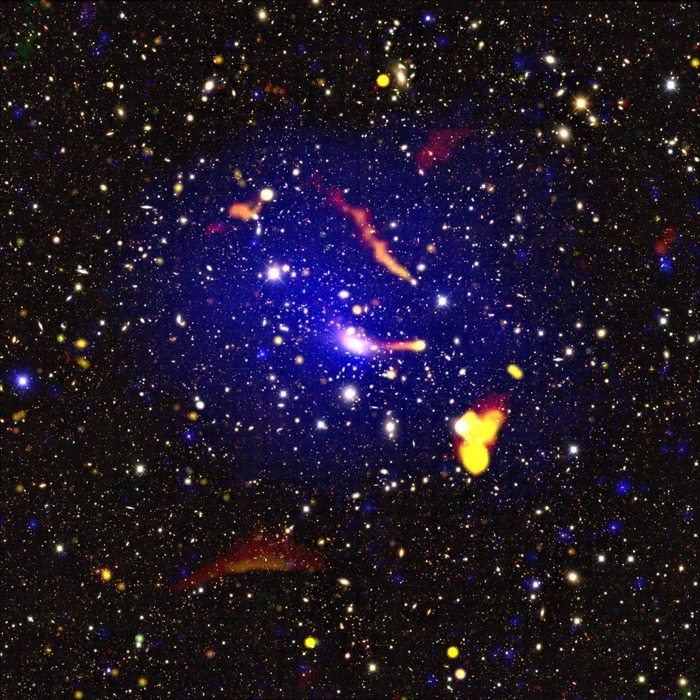 Above: The colliding cluster Abell 3266 as seen across the electromagnetic spectrum, using data from ASKAP and the ATCA (red/orange/yellow colors), XMM-Newton (blue), and the Dark Energy Survey (background map).

Galaxy clusters allow us to study a broad range of rich processes – including magnetism and plasma physics – in environments we can't recreate in our labs.

When clusters collide with each other, huge amounts of energy are put into the particles of the hot plasma, generating radio emission. And this emission comes in a variety of shapes and sizes.

"Radio relics" are one example. They are arc-shaped and sit towards a cluster's outskirts, powered by shockwaves traveling through the plasma, which cause a jump in density or pressure, and energize the particles. An example of a shockwave on Earth is the sonic boom that happens when an aircraft breaks the sound barrier.

"Radio haloes" are irregular sources that lie towards the cluster's center. They're powered by turbulence in the hot plasma, which gives energy to the particles. We know both haloes and relics are generated by collisions between galaxy clusters – yet many of their gritty details remain elusive.

Then there are "fossil" radio sources. These are the radio leftovers from the death of a supermassive black hole at the center of a radio galaxy.

When they're in action, black holes shoot huge jets of plasma far out beyond the galaxy itself. As they run out of fuel and shut off, the jets begin to dissipate. The remnants are what we detect as radio fossils.

Our new paper, published in the Monthly Notices of the Royal Astronomical Society, presents a highly detailed study of a galaxy cluster called Abell 3266.

This is a particularly dynamic and messy colliding system around 800 million light-years away. It has all the hallmarks of a system that should be host to relics and haloes – yet none had been detected until recently.

Following up on work conducted using the Murchison Widefield Array earlier this year, we used new data from the ASKAP radio telescope and the Australia Telescope Compact Array (ATCA) to see Abell 3266 in more detail.

Our data paint a complex picture. You can see this in the lead image: yellow colors show features where energy input is active. The blue haze represents the hot plasma, captured at X-ray wavelengths.

Redder colors show features that are only visible at lower frequencies. This means these objects are older and have less energy. Either they have lost a lot of energy over time, or they never had much to begin with.

The radio relic is visible in red near the bottom of the image (see below for a zoom). And our data here reveal particular features that have never been seen before in a relic. 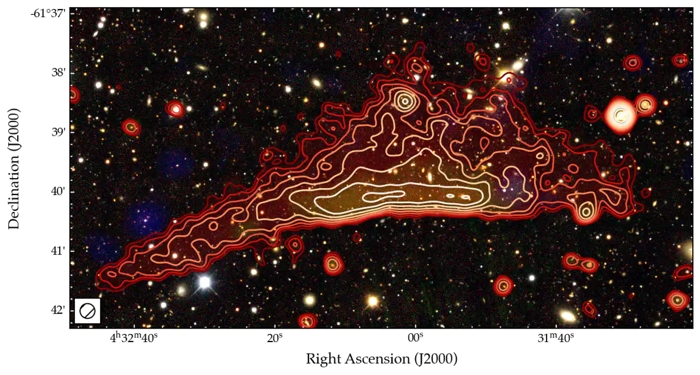 Above: The 'wrong-way' relic in Abell 3266 is shown here with yellow/orange/red colors representing the radio brightness.

Its concave shape is also unusual, earning it the catchy moniker of a "wrong-way" relic. Overall, our data break our understanding of how relics are generated, and we're still working to decipher the complex physics behind these radio objects.

The radio fossil, seen towards the upper right of the lead image (and also below), is very faint and red, indicating it is ancient. We believe this radio emission originally came from the galaxy at the lower left, with a central black hole that has long been switched off. 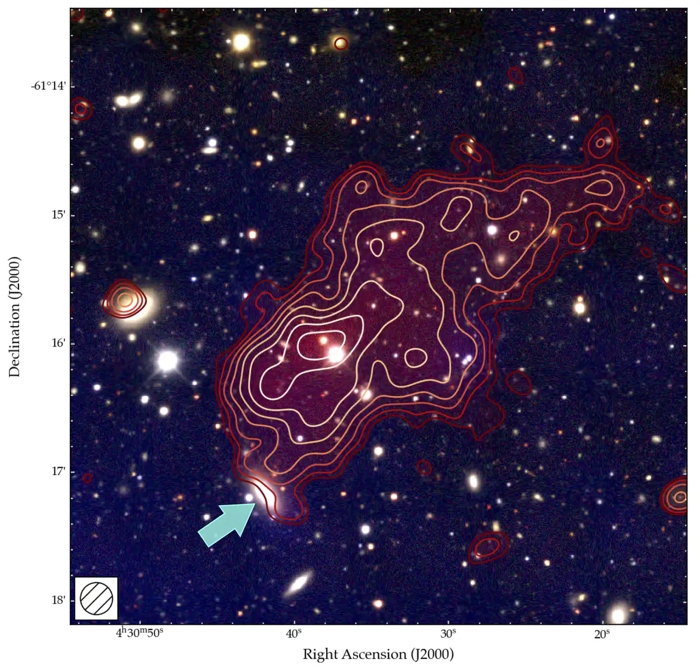 Above: The radio fossil in Abell 3266 is shown here with red colors and contours depicting the radio brightness measured by ASKAP, and blue colors showing the hot plasma. The cyan arrow points to the galaxy we think once powered the fossil.

Our best physical models simply can't fit the data. This reveals gaps in our understanding of how these sources evolve – gaps that we're working to fill.

Finally, using a clever algorithm, we de-focused the lead image to look for very faint emission that's invisible at high resolution, unearthing the first detection of a radio halo in Abell 3266 (see below). 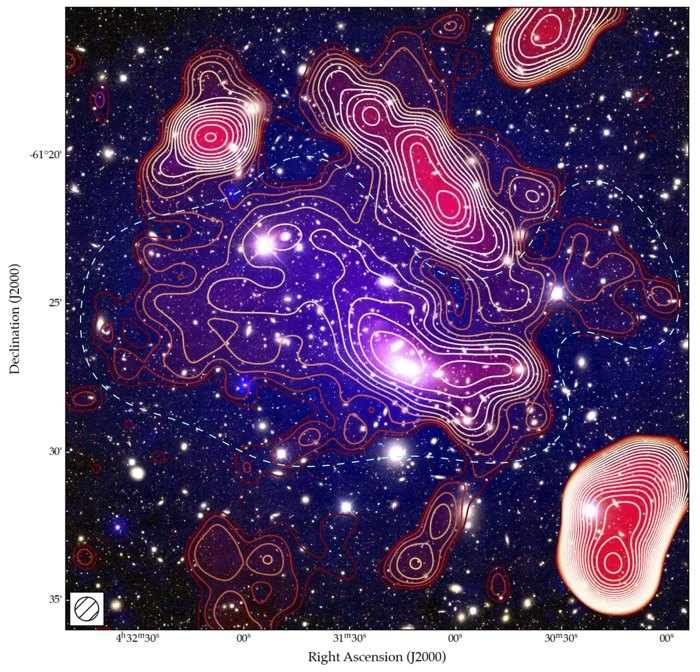 Above: The radio halo in Abell 3266 is shown here with red colors and contours depicting the radio brightness measured by ASKAP, and blue colors showing the hot plasma. The dashed cyan curve marks the outer limits of the radio halo.

This is the beginning of the road towards understanding Abell 3266. We have uncovered a wealth of new and detailed information, but our study has raised yet more questions.

The telescopes we used are laying the foundations for revolutionary science from the Square Kilometer Array project. Studies like ours allow astronomers to figure out what we don't know – but you can be sure we're going to find out.