The earliest known ancestor of most familiar forms of animal life living on the planet today appears to have been identified in outback Australia, revealing a strange, worm-like organism that deserves our respect and gratitude.

Ikaria wariootia, a sluggish blob about the size of a grain of rice, might not look like much, but scientists think it could be the oldest example ever discovered of bilaterians: animals with bilaterally symmetrical bodies (mirrored left and right sides) and a front side and back side, usually sporting a mouth and an anus. Like you, in other words.

"This is what evolutionary biologists predicted," says geologist Mary Droser from UC Riverside. "It's really exciting that what we have found lines up so neatly with their prediction." In recent years, scientists have learned a lot about the spongy, slimy multicellular organisms that make up what's known as the Ediacaran biota – a mysterious group of ancient life-forms who existed before the Cambrian explosion.

One of these creatures in particular, called Dickinsonia, has drawn a lot of attention among researchers, being identified a couple of years ago as the world's earliest known animal in the fossil record.

Not everything that emerged in this period is directly related to humans, though, nor to all the other animals with bilateral physiology.

So where did we and other bilaterians originate then? For many years, a set of fossilised burrowing marks imprinted in stone deposits in Nilpena, South Australia, have intrigued researchers.

These trace fossils, called Helminthoidichnites, date to the Ediacaran Period (specifically about 551 to 560 million years ago), and were speculated to be the legacy of an ancient bilaterian life-form. Thanks to new research, made possible by laser scanning of the stone deposits, that speculation looks to be confirmed. 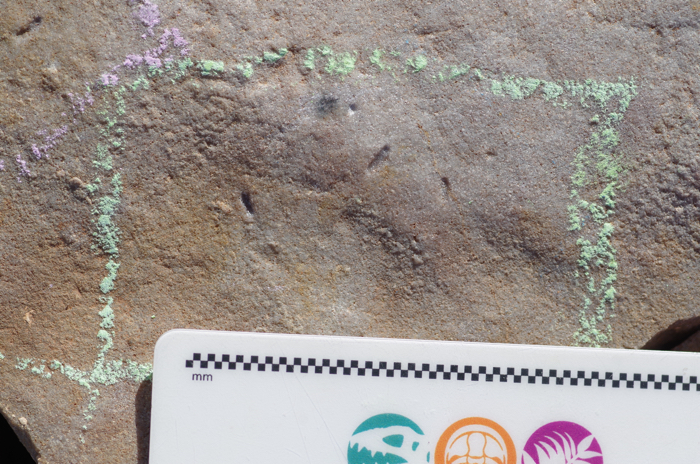 "We thought these animals should have existed during this interval, but always understood they would be difficult to recognise," says palaeontologist Scott Evans, now with the Smithsonian Institution's National Museum of Natural History.

"Once we had the 3D scans, we knew that we had made an important discovery."

The scans reveal impressions made by over a hundred of the ancient animals, ranging in between 2-7 millimetres long and about 1-2.5 millimetres wide.

This creature, dubbed Ikaria wariootia, takes its name from the Adnyamathanha language used by the indigenous custodians of the Flinders Ranges region, with 'Ikara' meaning 'meeting place', and 'warioota' being named for Warioota Creek, which runs in the area.

According to the team, I. wariootia's traces fossils occur lower than other Ediacaran biota records in the Ediacara site, suggesting this simple, worm-like creature, with a cylindrical body and distinct head and tail ends, pre-dates other animals in the region, let alone anything with this kind of bilaterian complexity, such as the symmetrical and slug-like Kimberella, traces of which have been found higher. "We propose that Ikaria is the trace maker of Helminthoidichnites and potentially the oldest, definitive bilaterian, at least as represented in the fossil record of South Australia," the researchers write in their paper.

"Ikaria morphology implies a potentially modular body construction, which would have aided in muscular organisation required for peristalsis [digestive system contractions]. Sediment displacement and scavenging reveal that Ikaria likely had a coelom, mouth, anus, and through-gut, although these are unlikely to be reproduced in the fossil record."

Of course, given we're dealing with trace fossils – impressions of something we can't actually see, and which might not have existed for hundreds of millions of years – it's hard to be entirely sure about I. wariootia just yet.

But if subsequent findings from other Ediacaran preserves can also turn up evidence of these ancient worms, the discovery of this ancient, worm-like creature could be a major milestone in our understanding of animal ancestry on Earth, including where – in a manner of speaking – we ourselves came from.

"The major finding of the paper is that this is possibly the oldest bilaterian yet recognised in the fossil record," Evans told The Guardian.

"​Because humans are bilaterians, we can say that this was a very early relative and possibly one of the first on the diverse bilaterian tree of life."