Scientists have found what may be the earliest evidence of clothing manufacture in a cave in Morocco, dating back 120,000 years.

It can be easy to take clothing and their origins for granted, as putting on an outfit at the start of the day is such an ingrained part of what it means to be a human being in the modern world.

Someone who doesn't take this for granted is anthropologist Emily Hallett from the Max Planck Institute for the Science of Human History in Germany, who recently published a paper outlining the Moroccan discovery.

Hallett, along with a team of researchers, had been investigating a number of bone fragments found at the Contrebandiers Cave, an important archaeological site on the Atlantic coast of Morocco.

Of the roughly 12,000 bone fragments found at the site, Hallett identified more than 60 animal bones that had been shaped by humans for use as tools. Patterns of cut marks on the bones matched with tools found at other archaeological sites that had been used to process leather. 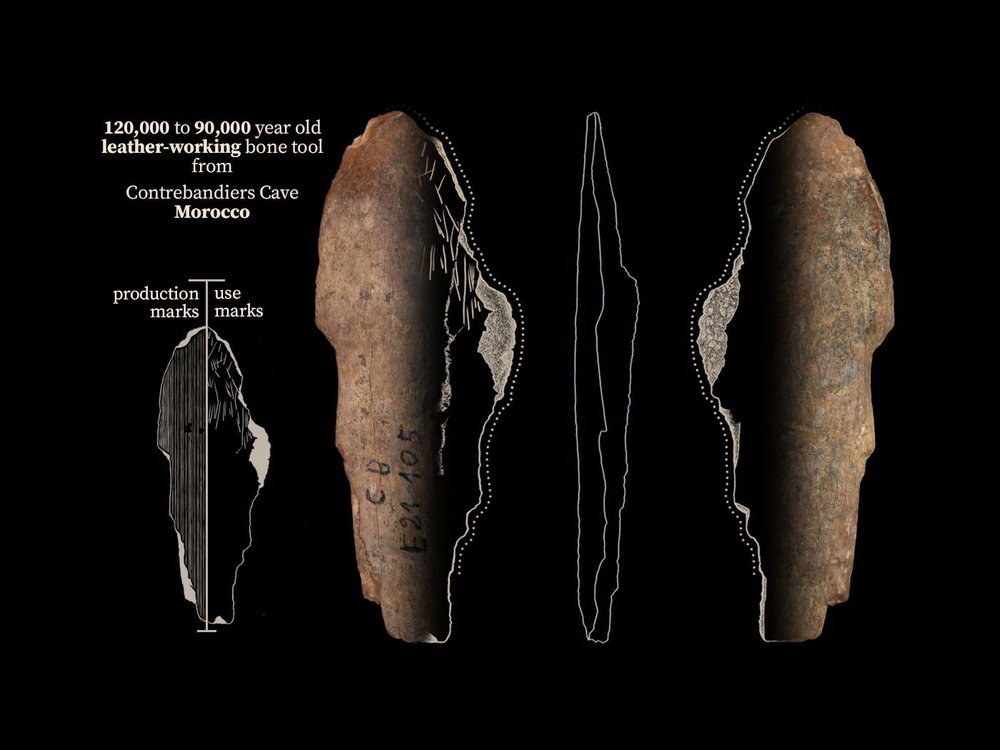 A bone tool from the cave. (Jacopo Niccolò Cerasoni, 2021)

"Organic materials such as leather and fur are extremely unlikely to preserve in deposits that are this old, so as archaeologists we are left with pieces of evidence that include tools and the bones from animals that preserve skinning marks," Hallett told ScienceAlert.

"We can put these pieces of evidence together and suggest that humans were using bone tools to prepare leather and fur that was likely used for clothing."

But it's worth noting the evidence isn't totally conclusive. "These bone tools could have been used to prepare leather for purposes other than clothing, such as storage devices," added Hallett.

Still, clothing such as fur and leather would have been particularly advantageous to humans during this period. As early humans expanded out of Africa they would have been faced with new environments, and perhaps climatically extreme habitats. Clothing and other tools would have likely aided in the dispersion of humans into new environments around the globe.

For fur, humans at the Contrebandiers Cave were skinning carnivores.

Carnivores were skinned and bone tools were used to prepare the furs. (Jacopo Niccolò Cerasoni, 2021)

"In this cave there are three species of carnivores with skinning marks on their bones: Rüppell's fox, golden jackal, and wildcat," Hallett told ScienceAlert.

"The cut marks on these carnivore bones are restricted to areas where incisions are made for fur removal, and there are no cut marks on the areas of the skeleton associated with meat removal."

While for leather, several species of bovid were found at the site.

"Hartebeest, aurochs, and gazelle bones were found in high abundance in the cave, and these animals were also consumed by humans, because there are cut marks associated with meat removal on their bones," added Hallett.

Hallett believes that given the specialization of these tools, they are likely part of a larger, older tradition. To add weight to this, genetic studies of clothing lice by others suggest an origin for clothing of at least 170,000 years ago in Africa.

"These tools were most likely used for clothing, and it is interesting that the archaeological record and genetic evidence both point to an ancient origin in Africa," said Hallett.

There may yet be unknown sites in Africa waiting to be found with tools and evidence that could further illuminate the history of the manufacture of clothing in humans.

The study was published in the journal iScience.