Dogs Become Troublesome at Puberty Much Like Humans Do, Study Suggests

Perhaps you've had to put up with a moody, uncooperative teenager. You may well have been one yourself. A new study suggests that dogs go through a similar phase of stubbornness and disobedience when they hit puberty at about eight months old.

Looking at the behaviour of a total of 378 canines, researchers found that the animals were more obedient and more responsive either side of that eight-month mark – but only when it came to their owners, not to less familiar trainers.

So not only do dogs appear to have a difficult adolescence just like we do, they also share the frustration that we often feel towards our parents or caregivers when we hit our teenage years. That has big implications for long-term canine care and sheltering.

"This is a very important time in a dog's life," says animal behaviour researcher Lucy Asher, from Newcastle University in the UK. "This is when dogs are often rehomed because they are no longer a cute little puppy and suddenly, their owners find they are more challenging and they can no longer control them or train them."

"But as with human teenage children, owners need to be aware that their dog is going through a phase and it will pass."

In one experiment with 93 Labrador retrievers, golden retrievers and their cross breeds, the pooches at eight months old were found to take longer and be more reluctant to respond to a 'sit' command given by their caregiver than they were when just five months old. The eight-month-olds didn't show the same obstinance when the command was given by a stranger, though.

The researchers found further evidence of this effect in survey data gathered on 285 Labradors, golden retrievers, German shepherds and their cross breeds. Dog owners and trainers less familiar with the dogs were asked to evaluate the animals' 'trainability' by answering questions on obedience and how quickly commands were responded to. 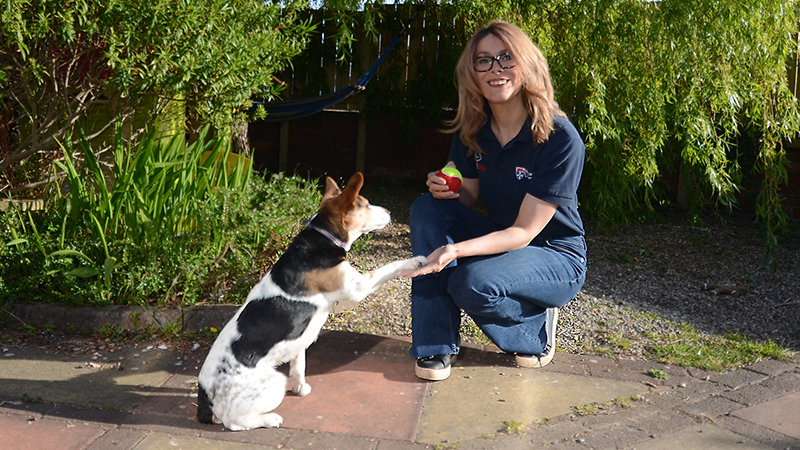 "It's very important that owners don't punish their dogs for disobedience or start to pull away from them emotionally at this time," says Asher. "This would be likely to make any problem behaviour worse, as it does in human teens."

Another finding from the study was that less secure female dogs – showing signs of a greater need for attachment and more anxiety when separated from their owners – reached puberty earlier, perhaps another parallel with human teens.

While evidence of this difficult phase may come as no surprise to observant dog owners, it's important to raise awareness of it. This eight month mark also happens to be the peak age at which dogs are given up to shelters.

If owners understand that their dogs are experiencing 'the teenage years' (and the associated changes in brain patterns and hormones), rehoming due to this reason might become less common. The researchers also say that our canine companions could offer an intriguing new way to study puberty in humans, to see if there are any more similarities to be drawn.

For the time being though, whether you've got an eight-month old pooch who refuses to obey your commands, or a 15-year-old teenager refusing to come out of their bedroom, bear in mind that this behaviour won't last forever.

"Many dog owners and professionals have long known or suspected that dog behaviour can become more difficult when they go through puberty," says zoologist Naomi Harvey, from the University of Nottingham in the UK. "But until now there has been no empirical record of this."

"Our results show that the behaviour changes seen in dogs closely parallel that of parent-child relationships, as dog-owner conflict is specific to the dog's primary caregiver and just as with human teenagers, this is a passing phase."

The research has been published in Biology Letters.