High blood pressure and type 2 diabetes are generally thought to affect the body, but a new paper has provided evidence that they can also affect our mind in subtle ways, and the effects can be seen already in middle age.

"We found that having high blood pressure and having diabetes in particular, has a detrimental effect on the speed of thinking and memory," co-first author of the study, Oxford University neurologist Michele Veldsman, told ScienceAlert.

"As blood pressure increases, speed of thinking and memory gets worse."

Diseases or other lifestyle and genetic factors that affect the brain's blood supply are known as cerebrovascular risk factors.

We already know that such risk factors increase the likelihood of older people getting dementia, but the new research has looked at a younger cohort, and used much subtler measurements to determine how the brain is affected in terms of memory and thinking speed.

The research team analysed MRI brain scans of more than 22,000 UK Biobank participants, looking for changes in the brain's grey matter and white matter pathways, as well as recording the volunteers' clinical, demographic, and cognitive data.

"The brain is made up of networks that connect different regions and work together to coordinate your thinking - these regions communicate via white matter pathways," Veldsman explained.

"We found that both the volume of the brain in a frontoparietal network, and the integrity of the white matter connections between regions are affected by risk factors that impact your brain's blood supply." 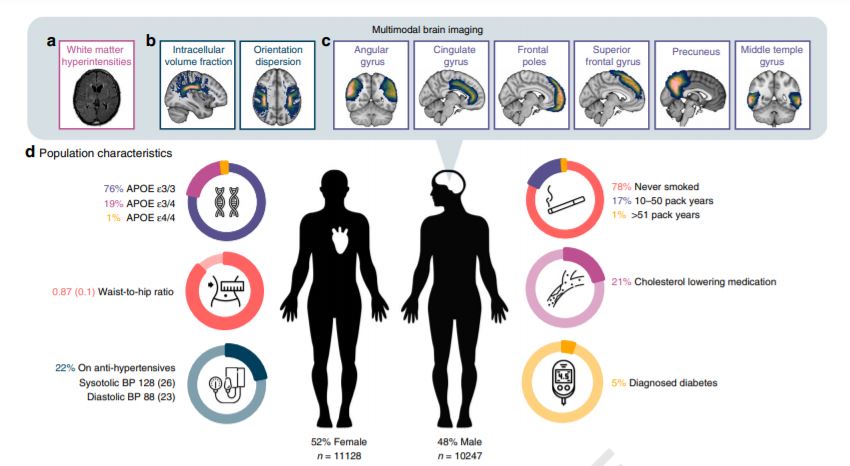 The team matched up the MRI data to the cognitive and clinical data, and found that in participants between 44 and 70 years old, higher blood pressure was linked to a lower cognitive performance. Interestingly, older adults (those over 70) didn't show the same effect.

Although only 5 percent of those enrolled in the study had a type 2 diabetes diagnosis, that status also predicted lower executive function.

The researchers do stress that this mental loss is very small: a slight decrease in thinking speed and memory, but nothing like the stark mental loss experienced in dementia. But the fact we can detect this decrease at all means that the participants' brains are already changing, and it could lead to worse outcomes with age.

"The changes were subtle, and probably not something you would notice in day to day life," Veldsman told ScienceAlert.

"But importantly, we can detect them and they are associated with subtle damage to the brain that is already occurring in midlife. Therefore, it is important to prevent this damage as soon as possible to prevent further decline."

Of course, with nearly half of all US adults having high blood pressure, and around 1 in 10 having type 2 diabetes, that's a lot easier said than done.

But as one of the researchers, University of Oxford neuroscientist Masud Husain noted, every millimetre of pressure in your arteries counts.

"Monitoring and treating even modestly raised blood pressure might make a difference to the structure of the brain and speed of thinking in mid-life, while also offering potential to reduce the risks of developing dementia later in life," he said.