Almost No Coral Reefs in The World Will Be Safe at 1.5°C Warming, Scientists Warn

Coral reefs have long been regarded as one of the earliest and most significant ecological casualties of global warming.

In new research published in the journal PLOS Climate, we found that the future of these tropical ecosystems – thought to harbor more species than any other – is probably worse than anticipated.

Climate change is causing more frequent marine heatwaves worldwide. Corals have adapted to live in a specific temperature range, so when ocean temperatures are too hot for a prolonged period, corals can bleach – losing the colorful algae that live within their tissue and nourish them via photosynthesis – and may eventually die.

Across the tropics, mass bleaching and die-offs have gone from being rare to a somewhat regular occurrence as the climate has warmed. More frequent heatwaves mean that the time corals have to recover is getting shorter.

In a 2018 report, the Intergovernmental Panel on Climate Change predicted that 1.5°C of global warming would cause between 70 and 90 percent of the world's coral reefs to disappear.

Now, with models capable of examining temperature differences between coral reefs one kilometer apart, our team found that at 1.5°C of warming, which the world is predicted to reach in the early 2030s without drastic action to limit greenhouse gas emissions, 99 percent of the world's reefs will experience heatwaves that are too frequent for them to recover.

That would spell catastrophe for the thousands of species that depend on coral reefs, as well as the roughly one billion people whose livelihoods and food supply benefits from coral reef biodiversity.

The thermal stress of a heatwave can affect corals over a huge geographic area, like the entire northern Great Barrier Reef or archipelagos like the Maldives. A marine heatwave in 2015-16 caused widespread bleaching in each of the Pacific, Atlantic, and Indian Oceans.

Corals are small polyp-like animals that form colonies of thousands by secreting a calcium carbonate skeleton that builds a reef. Corals grow slowly, so their recovery following bleaching and die-offs can take a long time and can be hampered by pollution and overfishing. Some species grow faster and are more capable of recovering quicker.

Scientists hope that local conditions on some reef tracts will ensure suitable temperatures for corals in the future, even when surrounding areas warm. These conditions may be possible due to upwelling, where cooler water is brought to the surface, or strong ocean currents. Reef managers can prioritize these so-called refugia, which offer corals a greater chance of survival.

Finding these refugia is difficult, though, as they are likely to be small and the resolution of climate projections that model changes in ocean temperatures over time tend to be too coarse.

Our team increased the resolution of climate model projections by downscaling them with historical data from satellite observations to find out where refugia are likely to persist in the future.

We found that, from 1986 to 2019, 84 percent of the world's reefs offered sufficient thermal refuge. This meant corals had enough time to recover in between bleaching events.

With 1.5°C of global warming above pre-industrial levels, only 0.2 percent of these refugia remain. At 2°C of warming, safe havens from heat for coral reefs will no longer exist. 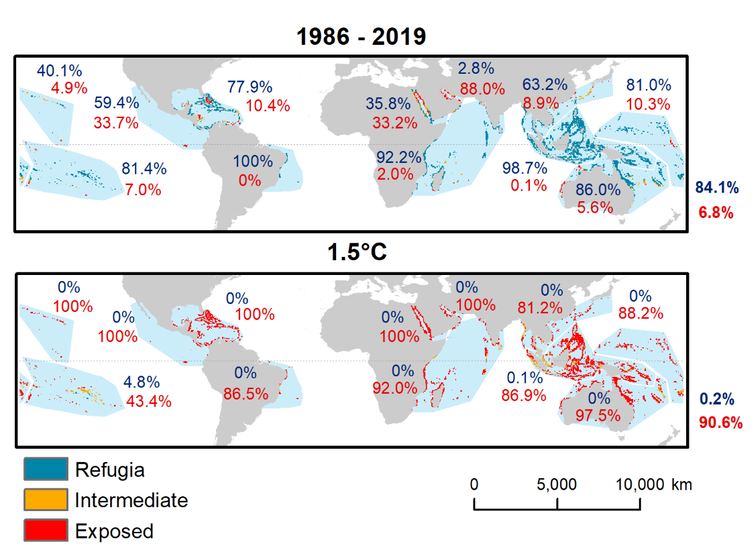 Preliminary findings from another study (yet to complete the peer-review process) would seem to confirm the catastrophic effects of 1.5°C of global warming on coral reefs. This research was carried out independently by scientists in the US using a different method but the same climate models and spatial resolutions.

The future of coral reefs

Global warming of 1.5°C is the lower limit that world leaders aspired to maintain when they signed the Paris agreement in 2015. This target is moving further out of reach.

For coral reefs, there is no safe limit to global warming. Given the rate at which the global average temperature is increasing, marine heatwaves are likely to become so frequent that most of the world's coral reefs will experience intolerable heat stress regularly. Most reefs have already experienced at least one such event this decade.

Not all regions are stressed at the same time as heatwaves are not global, nor do all corals bleach. Some coral species are more capable of coping with extreme temperatures than others due to their growth form or the type of algae within their tissue.

Still, the magnitude and frequency of heatwaves predicted in this study will probably affect even resistant coral species, suggesting the world will lose most of its reef biodiversity. Coral reefs of the future are likely to look very different to the colorful and diverse ecosystems we know today.

Climate change is already degrading coral reefs globally. Now we know that protecting the last remaining temperature refuges will not work on its own. Slashing greenhouse gas emissions this decade is the best hope for saving what remains.